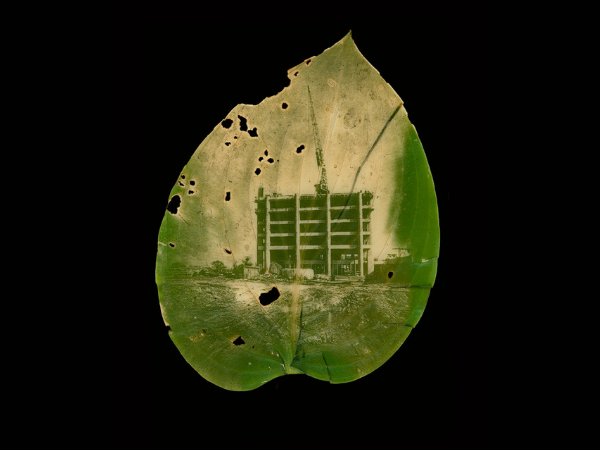 This month’s display in the Learning Commons cabinets features aspects of early photography and contemporary analogue and experimental image making. With the use of images from Brock’s Archives and Special Collections and vintage cameras from the Department of Visual Arts, the display offers a glimpse into early photographic processes from the 19th century and early 20th century.

The camera originates from an ancient device known as the camera obscura (meaning “dark room”). Light traveling through a small pinhole into a darkened room will project the image on the other side of the hole, upside down – seriously, give it a try! The earliest record is found in the work of Mozi, a Chinese philosopher (470 – 390 BCE). This simple technique is the foundation for all pre-digital photography.

The arrangement of photographs in the display may seem to present the development of photography as a steady linear progression of advancements with one building on the previous, however this is not the case at all. There were many inventors and entrepreneurs in the 19th century working in different locations who each had a goal of permanently fixing an image made with a camera. The early experiments were costly and time consuming. For example, the first known photograph by Joseph Nicéphore Niépce (1765–1833) in 1827 took several days of exposure in the sun for an image to render permanently. In 1839, Louis Daguerre (1787 – 1851) was the first to share his chemical formula of affixing an image permanently, though it too was costly (using a sheet of copper coated with silver), it only took minutes for it to render an image. An example of a “daguerreotype,” which he named after himself, is on display in the cabinet. As beautiful as these photographs were, it is important to note that these images were one-of-a-kind and not reproducible.

At the same time, Henry Fox Talbot (1800 – 1877), an English inventor and entrepreneur, was also experimenting with chemical processes though he was focused on reducing the exposure time and creating an image that could be reproduced. In 1840, he found a way that met both requirements in what he called a “calotype” (from the Greek kalos, meaning beautiful). Not only did it take mere seconds for the image to render, Talbot’s use of paper on which to apply his chemical formulation made this a cheap and widely available option. This is the basis on which Talbot would create the negative-positive process whereby multiple copies of a single photograph could be made. This remains the basis of all most analogue photography today.

By the end of the 19th century, George Eastman, founder of the Eastman Kodak Company, created easy-to-use portable cameras, making photography more accessible. Thus began the era of the amateur photographer. A few of Kodak’s early cameras are on display in the Learning Commons cabinets alongside other 20th century analogue cameras.

The photograph (which means drawing with light) is created by applying a light sensitive emulsion to a surface (e.g., paper, glass etc.) that changes when exposed to light. Today there is a resurgence in these early photographic techniques as well as interest in new experimental methods of image creation. The hallway cabinets display examples of a variety of analogue methods of image creation with the aid of photosensitive emulsions. Among the methods are the anthotype which use plant-based dyes, lumen prints using silver gelatin coated paper, and the cyanotype, another 19th century discovery, using a mixture of ferric ammonium citrate or ferric ammonium oxalate, and potassium ferricyanide.

Stop by when you have a moment to check it out.

Many thanks to Archivist David Sharron for loaning some of the amazing photographs from Brock Archives and Special Collections for the display, Professor Amy Friend from Department of Visual Arts for the loan of cameras and to Dr. Linda Steer also from the Department of Visual Arts for lending her expertise in the history of early photography for the creation of this exhibit. Finally, thank you to my collaborator Charity Blaine for being willing to play and learn together!