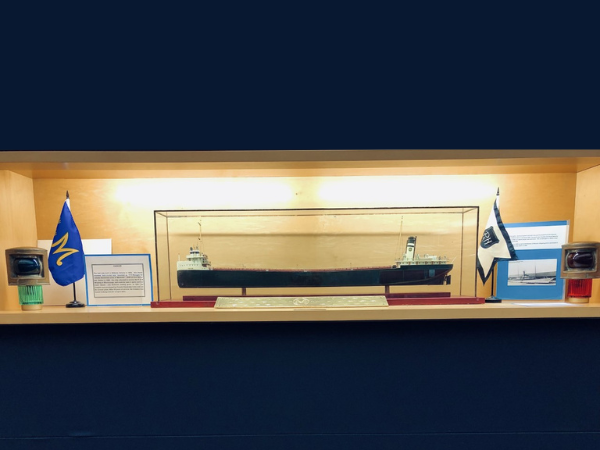 In anticipation of the 90th anniversary of the opening of the Fourth Welland Canal this August, Brock University Library Assistant Sue Sykes has created several exhibits in Library spaces that highlight some facts and history of the canals, their bridges and the ships that have passed through them.  Items were curated from Brock’s Archives and Special Collections, Archives Canada and Sykes’ own personal nautical collection. The Brock Makerspace helped create lithophanes of the Welland Canal flight locks. Items on display from her personal collection include a brass door stop and running lights from the Venitia steam yacht that was once owned by local shipping company Scott Misener Steamships; examples of shipping flags from marine carriers Algoma, Patterson and Great Lakes Towing; a model laker ship that travelled through the Welland Canal; a 1920s photo of the Port of Goderich filled with ships carrying grain; and an artifact from John A. Roebling, the Chief Engineer of the Niagara Falls railway bridge and the Brooklyn Bridge.

The displays are located on the main floor of the Library in the Matheson Learning Commons near the Ask Us desk and in Thistle Hall next to the Library’s south entrance. Additional historical information on the Welland Canal can be found in several digital exhibits curated by Brock Archives and Special Collections: Building the Welland Ship Canal, The History of the Welland Canal — All four of Them, and The Welland Canal’s Bridges and Tunnels — The Solution to Traffic Jams for over 100 years. Ship schedules are tweeted daily by the St. Catharines Museum Twitter account, and can be found on the Great Lakes St. Lawrence Seaway System Bridge Status webpage.