Day in the Life of a DSL Intern: Progress, Limitations, and Spur of the Moment Decorating 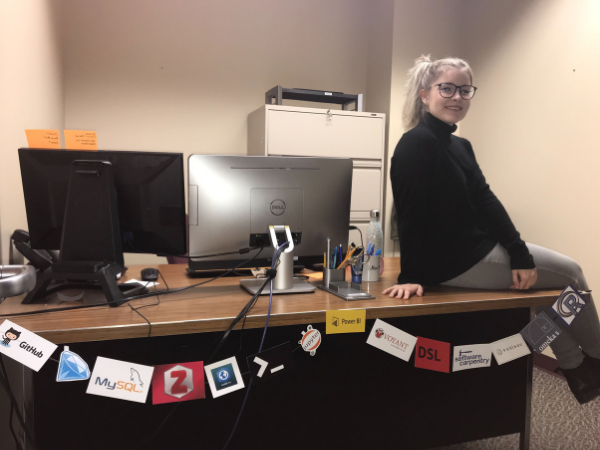 I often find myself thinking about how fortunate I am to be where I’m at in my life and to have been offered as many opportunities as I have. I often catch myself thinking “wow, I can’t believe my luck that I’ve made it this far”, but a lot of the successes I’ve had so far in my career have also been the result of hard work. My placement here at Brock has been a nice combination of both; I worked hard to get here, but I’ve also been incredibly lucky to have such amazing colleagues and supervisors who have helped me succeed in this position. I won’t get too sentimental here (I’m saving that for my last post), but I wanted to use this post to talk about my own progress as a future librarian, as well as the progress I’ve made in the DSL.

To start off our conversation about progress, let’s talk about limitations! Or rather, the podcast I “captained” in which we talked about limitations. I’ve mentioned this before in other posts, but I’ve really enjoyed participating in these podcasts. Facilitating the conversation was a new experience for me, and I planned a lot of talking points due to my tendency to talk fast when I’m nervous. Because there were so many talking points, however, the conversation ended up being quite lengthy. Make no mistake, I really enjoyed hearing everyone’s thoughts and having a productive conversation, but there was a lot that we didn’t get to talk about! One extra thing I want to say on the topic is that if there’s anything I learned from our conversation, it’s that limitations are a big part of making progress. Progress is about acknowledging limitations and things that go wrong, and moving forward to avoid them and learn from the experience. We also didn’t get to talk about one of the most significant limitations in the DSL – our vagrancy! The DSL’s current lack of a space was initially seen as a limitation, but we’ve moved past it by continuing to offer workshops and digital scholarship opportunities to the rest of the Brock community.

Speaking of workshops, I’ve been working on my presentation skills and trying to overcome my fast-talking tendencies. I think I’ve definitely taken some big steps forward in this area, but I’m still working on it! That’s another thing about progress – it’s a gradual thing. I’ve always lived my life by the phrase “progress, not perfection”, because progress is a much more realistic goal. I like that I can look back to the person I was when I started this placement almost three months ago and be proud of how far I’ve come, rather than beat myself up because I’m still not the best presenter in the world. I’ve learned a lot about myself as a professional since starting here at Brock, and I’m grateful for the learning opportunities I’ve been given in the DSL that will allow me to continue to progress as a librarian, and also as a person.

Finally, I’ll address a more light-hearted progression. Because this placement is only four months long, I was initially hesitant to decorate my office. Some of the librarians here at Brock have really gone all out with posters, toys, and furniture and I’m super jealous! I had originally planned to just settle for some cute knick-knacks on my desk, like the mug I mentioned in my last post. However, when I was tasked with disassembling the DSL’s display in the library, I couldn’t help but use some of the display pieces to jazz up my office a little bit. I know it’ll eventually have to come down for another DSL display in the near future, but for now it’s a fun way to show off how much I’ve learned here at Brock!

My blog series is posted bi-weekly, so be sure to check back on April 5th for more on my internship journey!