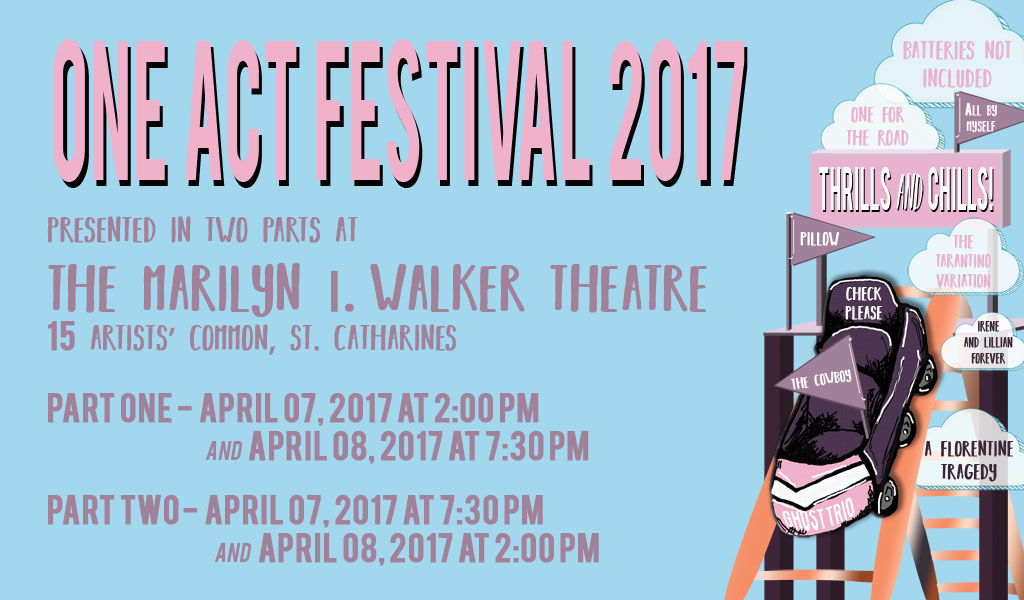 Every year, Brock University’s Department of Dramatic Arts presents an exciting festival of ten one-act plays, all completely directed by, designed by and starring the bright and talented students of the Marilyn I. Walker School of Fine and Performing Arts. This year’s ONE ACT FESTIVAL 2017 will be held at the Marilyn I. Walker Theatre on April 7 and 8, 2017, and promises an engaging and diverse variety of experiences for the theatre-going audience.

The ONE ACT FESTIVAL 2017 is presented in two parts over two days. Both parts are performed each day of the festival. Audiences may choose to view the full run of plays in one day, or watch one part per day.

As the final assignment for the third-year Directing II class, each directing student chooses a one-act play to produce for the ONE ACT FESTIVAL 2017. This year, the directing and design students are mentored by Visiting Director (and retired faculty member) Professor Virginia Reh, collaborating with Professor David Vivian. The students direct, design and perform ten short plays as they complete their courses in directing and theatrical design.

Topics of the plays include the exploration of human relations in historical settings through to the thrills and chills of contemporary life. Professor Virginia Reh states, “Over the years I have enjoyed watching the young directors select challenging plays and grow their confidence and artistry during the 10 weeks of rehearsal development. Completing the One Act Festival is a capstone achievement as they prepare for their final year of study.

This is the first year the directing and design students have collaborated together to realize the festival. Professor David Vivian states, “As we complete the second season at 15 Artists’ Common our students will bring their bold visions to life in a reconfigured Marilyn I. Walker Theatre. With every production we learn about innovative possibilities provided by our excellent new facility.”

Parking is not available on-site, however, there are more than 1,000 spots available in nearby parking garages, surface lots, and on city streets within a five-minute walk to our address at 15 Artists’ Common. Visit http://www.stcatharines.ca/en/livein/ParkingLotsGarages.asp for a list of parking locations.

Such performances from the Department of Dramatic Arts are an integral part of the Marilyn I. Walker School of Fine and Performing Arts’ mandate in building connections between the community and the breadth of talent and creativity at Brock University.