The Banff Center, located in the scenic Rocky Mountains of Alberta, is the largest arts and creativity incubator on the planet. Every year over 8000 artists, leaders, and researchers come from all over Canada and worldwide to participate in a large variety of arts programs. This year, a Dramatic Arts student, Gina Greco, is participating in a work study program as a wardrobe technician.

Gina, a Dramatic Arts Student concentrating in Production and Design, has worked on a number of projects within the department. Focusing on aspects of costuming, she has worked on the One Acts Festival, the Fall 2012 Mainstage The Suicide – A Russian Comedy by Nikolai Erdman, directed by Gyllian Raby, Empty Box Theatre’s production of Shakespeare’s Titus Andronicus, and the independent production Runner, written and directed by colleague and student in the Dramatic Arts program, Nicole Titus. 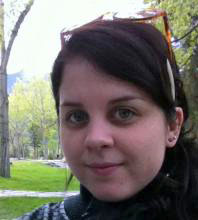 Gina Greco at the Banff Centre

Banff’s Theatre Arts Production, Design, and technology training programs have been running for more than 60 years. Participants are guided by many creative and design teams working simultaneously in opera, dance, theatre and interdisciplinary performance. With a combination of hands-on experiences and skill based training, the program seeks to inform and inspire the next generation of theatre makers and artists.

Some projects Gina will be working on are preparing a costume set for the opera Marriage of Figaro, making alterations on the costumes of an opera arriving from England, as well as a professional dance show. She will be working along side three other work-study technicians as a cutter and a First Hand under the guidance of the Head of Wardrobe Patsy Thomas.

“The most exciting thing is getting an opportunity to practise my craft in one of the most beautiful places in the world. It’s my first time out west and I couldn’t ask for a better reason to be here,” Gina exclaimed.

“I think the biggest challenge will be adapting to working in a professional theatre environment, since I’ve never done something on this scale. But I’m totally up to that challenge!” she added.

To follow Gina’s experiences as cutter and first hand at the Banff festival, check out her blog on Tumblr.