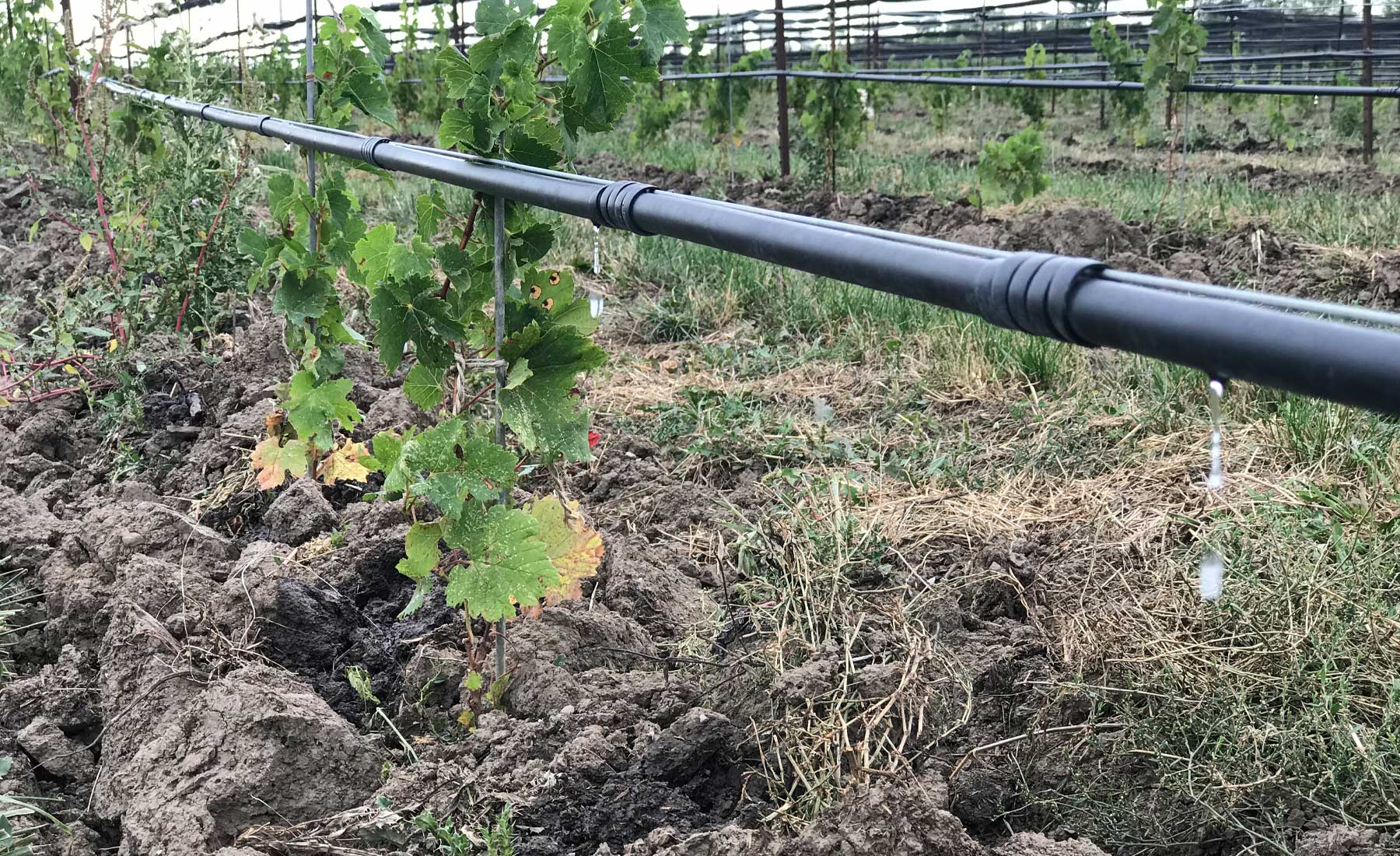 Drip-irrigation being applied to a Niagara vineyard in late summer (photo: Kasia Zgurzynski).

Water is essential in viticulture. How much water is made available to the vines is extremely important as it directly affects both yield and fruit quality. While rainfall is the least labour intensive and costly method of obtaining water, changes in climatic patterns can make dependence on rainfall alone a challenge. In years of prolonged drought and heat waves, water is often at a deficit, meaning that vines may not get enough water to grow properly or even to survive, depending on when this happens during the growing season. Irrigation is a solution to mitigate water stress in the vineyard.

Irrigation is a technique by which a controlled amount of water is applied to plants. The main goal of irrigation in grape production is to apply the required quantity of water throughout the vineyard, at the correct time, so that vines do not suffer from water stress. There are several methods that can be used in irrigation, and the method chosen depends on vineyard needs such as the size of the field, topography, type of vine, etc. The three main irrigation types used in vineyards are surface irrigation, sprinkler irrigation and micro-irrigation.

Surface irrigation, also called flood irrigation, is the oldest irrigation method that was predominately used by farmers in the past. This technique includes flooding the field so that the water moves across the surface of the vineyard and infiltrates the soil. This method is less expensive than other irrigation systems as the equipment needed is minimal and it relies on gravity for water infiltration. However, it is difficult to control uniformity in the amount of water dispersed across the field using this method. This may potentially lead to over-watered vines as well as a high amount of water being wasted due to evaporation and runoff.

In the sprinkler irrigation technique, water from pipes that are, usually, buried underground is distributed through high-pressure sprinklers attached to pipes in various sections of the vineyard. This method is often seen in our local surroundings in the Niagara region, since it is also used to irrigate places such as gardens, parks, and football fields. This technique is more expensive than surface irrigation, but it presents a dual benefit as the equipment can also be used to reduce vine damage from frost in spring and fall. However, it is still not the best method for delivering a precise amount of water to each vine. Furthermore, even though it is better than flood irrigation in controlling waste, there is still water lost due to evaporation using this method, since the water is sprayed upwards and through the air before reaching the soil.

The key to successful implementation of vineyard irrigation is to provide just enough water for the vine. In regions with low rainfall, for example, irrigation is necessary during the summer, since the vines need water most during the early stages of the growing season and during the dry seasons. After fruiting starts, irrigation must be minimized as vines need to go through a period of water stress to develop smaller grapes (thus, increasing the skin to juice ratio). However, if the water stress period is too extreme, some irrigation may still be needed. The goal is to achieve an equilibrium: neither too much water nor severe and prolonged drought. Therefore, vineyard managers need to consider how irrigation affects, and is in turn affected, by other management components applied to the system.

In the Organic Science Cluster 3 project here at Brock University, we aim to explore sustainable management approaches to help grape growers adapt to climate change. Using organic vineyards as study locations, we are testing different combinations of three important vineyard management components: T– irrigation, cover cropping, and rootstock performance. Ultimately, our results will help us to understand how different options may support production despite the challenges presented by climate change.

This blog will be ongoing throughout the duration of the project with bi-weekly updates provided by Liette Vasseur, Heather VanVolkenburg, Kasia Zgurzynski, Habib Ben Kalifa, and Diana Tosato (see research team). We will be providing research activity updates as well as informative pieces that delve into agricultural concepts and important global issues as they relate to agricultural sustainability and climate change. Stay tuned for regular updates!