Directed by Professor Virginia Reh, The Blue Room is David Hare’s 1998 adaptation of Schnitzler’s Reigen (La Ronde), first produced in 1921. The plot is a “sexual daisychain”: the Girl couples with the Cab Driver, then the Cab Driver with the Au Pair, etc. Each time the new participant in one scene moves on to the next scene and so on, until in the final scene the Girl returns and encounters the Aristocrat. The play looks at casual sexual encounters as a (mostly) unsatisfactory substitute for human connection. This is a universal and timeless quest. The play is an important exploration with diverse current points-of-view: as each character has encounters with two different partners, the play explores the shifting status relationships (both social and personal). The relational dynamics of the play have interesting correspondences to explorations on social media.

Theme-oriented and moderated workshops will be available. DART 3F93: Social Issues Theatre for Community Development, taught by Professor Joe Norris,  will employ Process Drama and Applied Theatre techniques to explore themes that underlie the Blue Room. Scenes will be created that delve into issue of identity, innocence, risks, thresholds, secrets, awkwardness, beliefs, mores, taboos, exploitation and power. With a participatory dimension cast and audience will enter into conversations to explore the issues further.

THE BLUE ROOM: A Primer
is available for review before you come to see the production

Interactive Arts and Science program student Patrick Gagliardi has put together a sultry trailer for the show.

from COGECO TV, Published on Feb 8, 2013: The Department of Dramatic Arts at Brock University are hoping to spice up your Valentines Day with their new production “The Blue Room’. 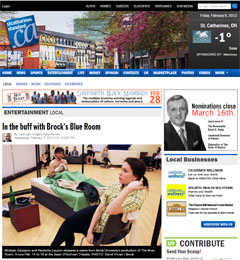 In the buff with Brock’s Blue Room:
A fun full-first-page-of-the-section article about our upcoming mainstage in the city paper – another great reason to study dramatic arts at Brock University. Come see the play and discover what its really all about. 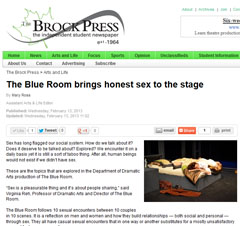 See the article about the show in The Brock Press, the independent student newspaper.