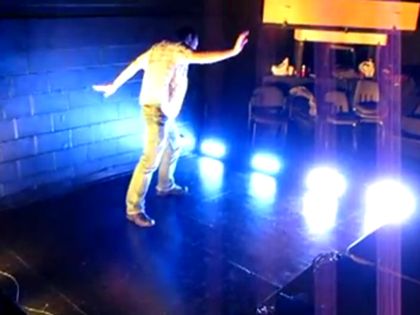 On January 26 and 27, 2012, Fujimoto Takakyuki – pioneer of stage design with LED lighting – visited the Department of Dramatic Arts to give a demonstration and creative workshop with this innovative technology.

Fujimoto has created a unique staging method using LED light systems and installations to manipulate all colours of the spectrum. His aim is to create new “circuits” to connect directly to the audience with no less strength than the connection created by the stage performer communicating directly to the audience in a live stage experience. He is principle designer for the Japanese performance group Dumb Type. Independently his work True, created with Tsuyoshi Shirai (AbsT/BANETO) and Takao Kawaguchi (Dumb Type) has been touring since 2007. He has worked with Ryoji Ikeda on the videomusic concert series “formula”, with Hong Kong choreographer Daniel Yeung, Vietnam-French choreographer Ea Sola, Singapore’s video artist Choy Ka Fai, on the installation/concert path with the guitarist Kazuhisa Uchihashi and singer UA, and with dance company Monochrome Circus. He recently designed for Kyoto Noh Theatre’s 2011 production.

Fujimoto was hosted in Canada by Across Oceans and artistic director Maxine Heppner, a Toronto-based organization that  produces international arts platforms in Canada and worldwide, with acclaimed performing, visual and literary artists, and develops interactions created specially for specific environments and communities. Programming includes live performance, 2-D and 3-D art exhibits, film/video screenings, public forums, advanced training and research.  Fujimoto’s recent collaboration with Across Oceans my heart is a spoon was well-received by Toronto critics and audiences.

Fujimoto shared his creative approach in technology with approximately 15 students and professionals. A selection of videos from the workshop can be found on YouTube.