Experiential Education in a Virtual Year 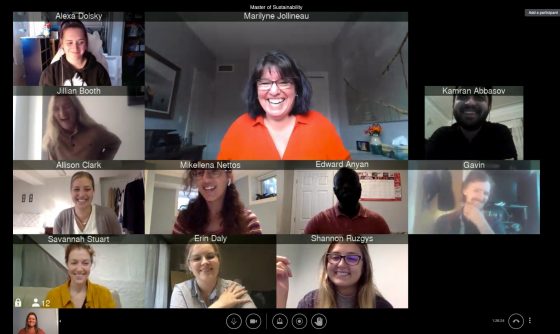 Sustainability at Brock usually would have involved a tour of Brock’s Central Utilities Building, but instead involved Mary Quintana (Director, Asset Management & Utilities) and Amanda Smits (ESRC Centre Administrator) virtually joining the class to discuss how Brock is committed to sustainability through management of facilities. The students were virtually walked through Brock’s District Energy Efficiency Project (DEEP), which involved replacing old co-generation engines with state-of-the-art energy efficient units. The students were walked through how this project had increased energy efficiency and lowered Brock’s carbon emissions, helping the university stay on track with their sustainability targets. The students were also introduced to the sustainability initiatives on campus through BU Sustainable, including the @busustainableInstagram and other social media platforms. Even though the students couldn’t walk the underground tunnels of Brock instead, they still got to learn and experience all of the ways in which Brock is currently enacting sustainability every single day through a virtual presentation.

The second experiential education component focused on UNESCO Biosphere Reserves, including the Niagara Escarpment Biosphere Reserve, a reserve in which Brock University is situated. The students were virtually joined by Dr. Liette Vasseur who is a faculty member at Brock University and Lisa Grbinicek, a Senior Strategic Advisor at the Niagara Escarpment Commission. Through their presentations we were taught about the Ontario’s Greenbelt, UNESCO Biosphere Reserves, and natures contributions to people. The discussion was kicked off by highlighting the vast expanse that is the Greenbelt, which is 1.8 million acres of protected land spread across Ontario, including the Niagara Escarpment. The unique biodiversity within the Niagara Escarpment was discussed, including thousand-year-old trees, rare flora, and multitudes of mammals, birds, and reptiles. The students learned about the early plans put in place to protect the greenbelt and its designation as a biosphere reserve in 1990. From there, new developments in UNESCO’s Biosphere Reserves were discussed, including the ongoing conversation around the colonial implications of the term and the aim to change the term to Biosphere Region. The students also got to learn about ongoing developments in the field of biodiversity, including the differences between ecosystem services and natures contribution to people. Overall, the students got to hear from two professionals who have spent years in the field, protecting and researching biodiversity, and got to learn about the natural wonders that surround Brock.

The final educational component highlighted the innovative community partnerships in the Environmental Sustainability Research Centre (ESRC). While in any other year this would have involved the students visiting these partnerships in person through an interactive field trip, instead this course component took place virtually this year. The students were joined by Ryan Plummer (Director of the ESRC), Amanda Smits (ESRC Centre Administrator) and Erica Harper (a second year SASS student and ESRC co-op student). The students were walked through each of these partnerships and learned how the ESRC is actively integrating transdisciplinary research into the surrounding community. The ESRC is currently involved in 8 community partnerships, including the Brock Lincoln Living Lab, Niagara Adapts, Trail Assets and Tourism, and a new Living Planet @ Campus partnership with WWF. As transdisciplinary research is a pillar of the SASS program and the ESRC, it was very important for the students to experience how the centre is integrating the transdisciplinary approach into their own partnerships. So, while the students did not get to visit these partnerships, they were still able to experience and learn about all of the work that the ESRC is doing within the community and learn about these partnerships.

In a virtual year, experiential education can be a difficult thing to accomplish but the SASS students were still able to learn about and experience all of the ways in which sustainability is lived out at Brock, including through the facilities management, Brock’s place in a Biosphere Reserve, and the ESRC’s innovative partnerships.