Getting to know the ESRC 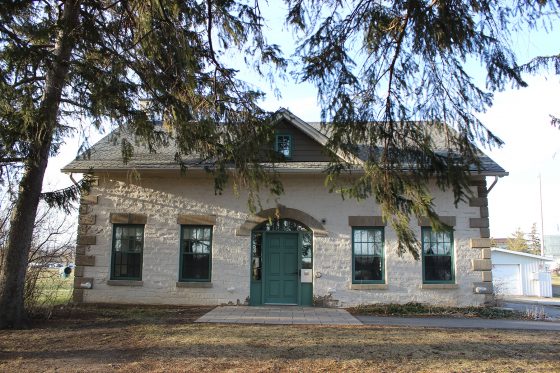 You know that quaint white house by Zone 2 Parking Lot on your way out of Brock? Many of you in the Brock community have no idea what I’m talking about, but take my word for it—there’s a building there alright, and this building in question is known as Theal House. Named after Samuel Theal who is believed to have built the house, where his family then lived for decades, Theal house is the oldest building on campus and one of the oldest in St. Catharines.

As its been around since the 1800’s, it has served many roles and housed many tenants over the years, but most recently, it became the home of the Environmental Sustainability Research Centre (ESRC), as they officially settled in by February 2018.

As a centre within the Faculty of Social Sciences dedicated to environmental sustainability, the building was renovated in a way that incorporated sustainability within its walls. The floors were acquired from Interface, a company known for its commitment to sustainability, which represented 3 tonnes in emissions reductions. Used furniture was acquired from antique stores, and live edge desks produced by Brock carpenters with certified sustainable timber. LED lighting was installed, with dimmer and daylight harvesting light switches, and sensors to save energy. An integrated system that controls HVAC, lighting, and monitors real time energy use is also present in the building.

But Theal House does so much more for sustainability than its physical features.

The ESRC is dedicated to research and education advancing environmental sustainability both locally and globally, and runs several initiatives, all made possible by the supportive base that is Theal House.

As one of five transdisciplinary hubs on campus, the ESRC has had the capacity to do some great work since 2012.

But what exactly are these great things that the ESRC does?

Well, the ESRC has created a highly productive research culture and impressive output, with 392 peer-reviewed publications meant to resolve complex environmental/social problems being published between 2012 and 2017.

They also carry out several projects and programs to support this research, such as their seed grant funding program started in 2013 that supports projects related to the ESRC’s mandate. There is also a postdoctoral fellowship that creates opportunities for faculty and fellows to carry out research. Theu also run a visiting scholars program that brings high level scholars engaged in research on the environment, sustainability, and social ecological resilience to interact with ESRC members and SSAS students.

One example of this is the Brock Lincoln Living Lab which was created in 2017, and will continue for the next five years. In this partnership with the Town of Lincoln, students contribute to the community through experiential education, putting more resources into municipal planning and research to investigate local needs and policy development.

Another important partnership is with the Niagara Parks Commission, which created the Excellence in Environmental Stewardship Initiative in April 2018, which will last until 2020. The partnership is meant to inform and enhance practice, improve the NPC’s capacity to make evidence-based decisions, and advance understanding of environmental stewardship.

But beyond research, the ESRC also offers academic opportunities within sustainability. This includes a minor program in environmental sustainability that can be recognized in conjunction with any major degree program, and which offers courses in 15 units across campus.

A Masters program in sustainability science and society was started in 2014, where students can gain problem solving skills through enriching research and applied experiences, in one of the two following schemes:

As a part of this program, transdisciplinary seminars are held bi-weekly, which anyone is welcome to attend.

Finally, the ESRC also offers a PhD program in sustainability through an agreement with the University of the Sunshine Coast in Australia, where a scholarship allows a student to study in both places under the supervision of researchers from both universities.

All of this is beneficial for Brock, but the ESRC has recently taken on an additional exciting role alongside Facilities Management.

The two departments signed a charter in February, which outlines their agreement to work together on Sustainability at Brock. The charter provides an important bridge between the academics and operations sides of campus, creating a partnership where the two can collaborate on projects of mutual benefit and create mechanisms to communicate sustainability initiatives and progress with the Brock community.

The two agreed to contribute cash and in-kind contributions over an initial 5 years, and the ESRC has been working hard on providing administrative support to meet the goals of the charter this summer, partly through the work of summer students hired through the Charter. In fact, these blogs and the Sustainability at Brock social media channels they are posted to are part of this important work!

So, the next time you’re near Zone 2 parking lot, look for the cottage-like white building that is Theal House, and when you see it, now you’ll know what it’s for and what kind of work is going on inside.