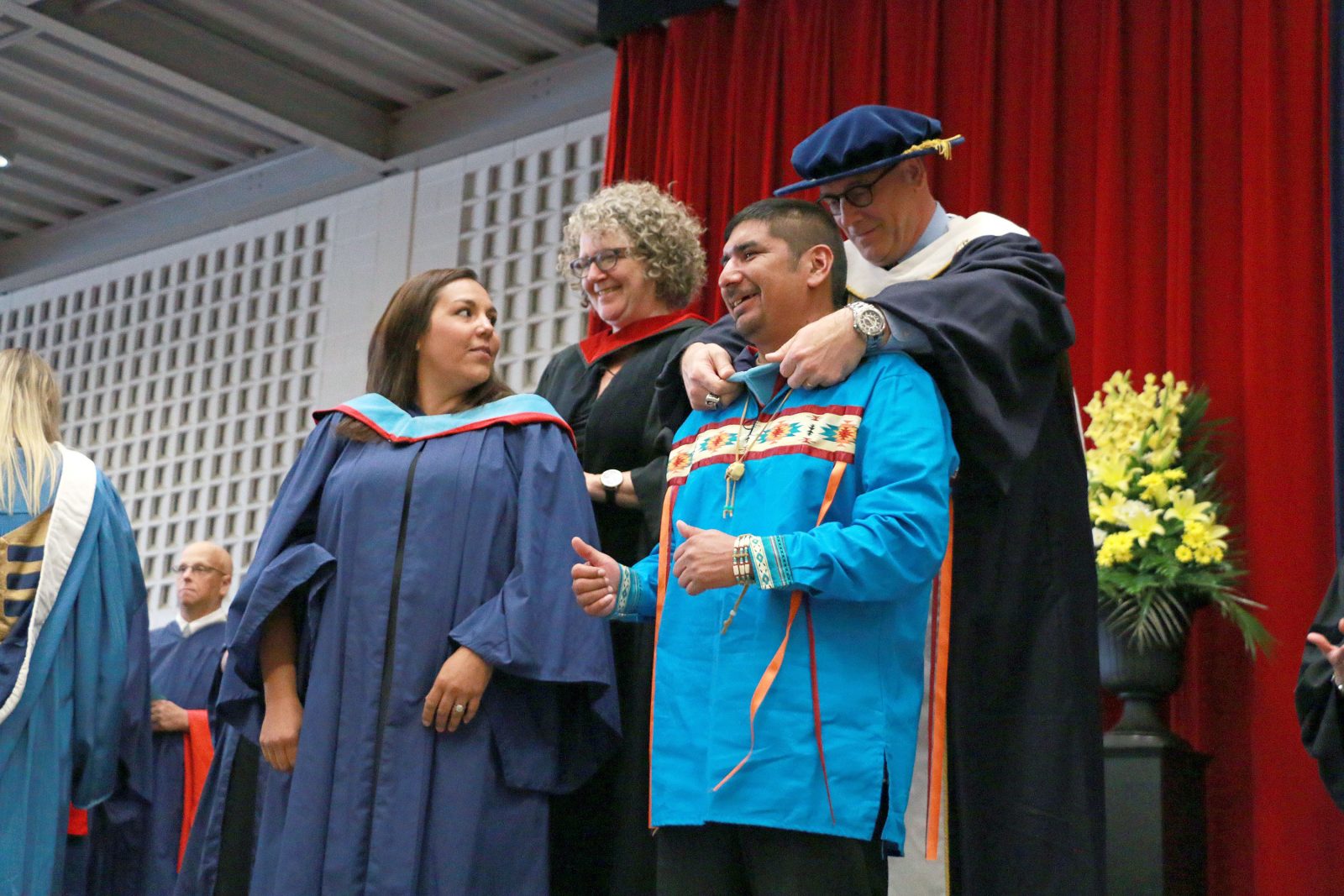 For Darcy Belanger, Wednesday’s Faculty of Education Convocation ceremony, was his first graduation.

When others his age were graduating from high school, he was on what he calls his ‘first journey.’

Belanger is of Ojibwe descent and a member of Little Black River Reserve Southeast Manitoba. At just two years old, he was removed from his family and adopted into a non-Indigenous home during the Sixties Scoop.

A decade ago, Belanger began a new journey at the Southridge Shelter in St. Catharines. He worked through his trauma and found a passion for tackling poverty and problems in the community.

At the same time, Belanger started learning about his culture. As a Sixties Scoop adoptee, he knew little about his heritage.

He was struck by the challenges Indigenous communities face.

“I knew I wanted to do something,” he said. “I was already volunteering four days a week at the shelter. I was involved in leadership programs as well as putting together charity events. I just wanted to do more.”

But his Grade 9 education was a barrier.

With help from a literacy program at the Niagara Regional Native Centre, Belanger completed his GED. His teacher encouraged him to explore the options offered at Brock.

First, he completed a Certificate in Aboriginal Adult Education offered by the Tecumseh Centre for Aboriginal Research and Education. Then he enrolled full-time to complete his BEd.

Through courses in his program, he learned more about the First Nations in this area and topics such as the residential schools.

Not surprisingly, Belanger was an active member of the Brock community, working with Aboriginal Student Services and organizing a successful Sixties Scoop talk in his second year. In 2017, he received the Aboriginal Achievement Award.

Convocation marks the start of Belanger’s next journey.

His ultimate goal is to create a healing centre to help Indigenous men cope with the lifelong impacts of trauma, whether intergenerational or from direct experience.

It would fill the gap in resources for Indigenous men in Niagara, offering support from on-site doctors and social workers, as well as opportunities for men to learn from Indigenous community members and Elders. Loss of identity, especially through cross-cultural adoptions or foster care placements, is a significant challenge for the men Belanger aims to help.

Belanger hopes to break the cycles of addiction, incarceration and other challenges faced by those who have experienced trauma.

“Having this centre is to stop all that. Stop that cycle. Bring back the fathers, the brothers, the sons, the uncles, the grandfathers,” he said.

His group of advisors for the project includes Brian Hutchings, Brock’s Vice-President, Administration, who hooded Belanger during Wednesday morning’s ceremony.

Over the past decade, Belanger has made a significant impact on his community. He has volunteered with the NRNC for several years, currently serving as Vice-President of the Board of Directors. He is a Council member of the Three Fires Community Justice Program and a member of the Niagara Regional Pow Wow committee.

He also volunteers with the Southridge Shelter, where he took his first steps to the life he lives today.

“It’s been about 10 years since I’ve started my new journey,” he said. “Education was a big part of turning around and helping others that have gone through what I’ve gone through.”