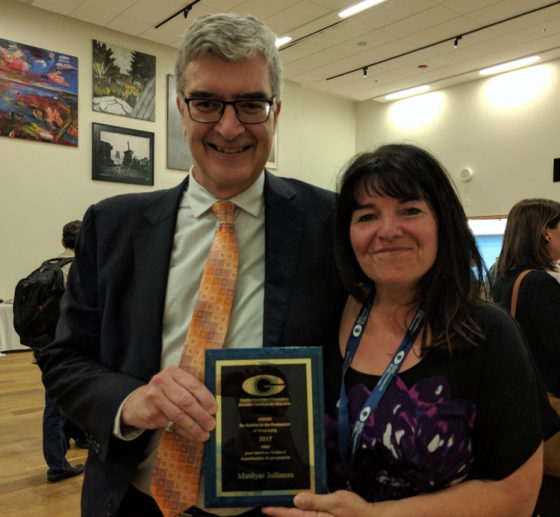 Dan Shrubsole (left), President of the Canadian Association of Geographers, presents Marilyne Jollineau with the CAG 2017 Award for Service to the Profession of Geography. Photo by Patrick Brouder.

Brock University’s Dr. Marilyne Jollineau has been named as the 2017 recipient of the Canadian Association of Geographers’ (CAG) Award for Service to the Profession of Geography. This award recognises Jollineau’s outstanding contribution to the development of Geography in Canada as a supporter and mentor of many graduate and undergraduate students.

Jollineau was presented with this award at the Annual General Meeting of the CAG at York University on May 29th. President of the CAG, Dan Shrubsole, said “I have seen first-hand the impact of some of your contributions to the CAG, and wholeheartedly concur with their observations and the CAG Awards Committees decision. My warmest congratulations on this well-deserved honour, which recognises your outstanding contribution to the development of the discipline in Canada.”

A Professor in the Department of Geography and Tourism studies at Brock University, Jollineau has been a positive force in the education of many students. She says of the award, “I am delighted and honoured to be named recipient of the Award for Service to the Profession of Geography. Being a member of the CAG and having the opportunity to work with so many talented geographers has been a tremendously rewarding experience!”

Additionally, Jollineau is a member of the Environmental Sustainability Research Centre (ESRC) owing to the environmental theme that runs through much of her research. The ESRC’s Director, Dr. Ryan Plummer, expresses his congratulations to Jollineau on behalf of the Centre,

“Dr. Jollineau is dedicated to many subjects within Geography and is in great demand by transdisciplinary research teams due to her expertise as well as capacity to forge meaningful conceptual and applied connections across traditional disciplinary boundaries. Her commitment to pedagogy, teaching, student mentorship and program development is unparalleled.”

Plummer also pays tribute to Jollineau’s contributions to the Sustainability Science and Society (SSAS) graduate program, “She is a founding architect of the SSAS program here at Brock and is the present Graduate Program Director. Her service contributions are unprecedented, both at Brock University and beyond. The CAG Award for Service to the Profession of Geography is a most deserved national recognition of the significant and sustained record of excellence by Dr. Jollineau”.

Jollineau has held a number of positions with the CAG, including serving as the President of the Canadian Association of Geographers, Ontario Division (CAGONT) from 2013-2014 and as President of the Association from October 2010 to October 2013. Since 2014, Jollineau has focused on promoting Geography amongst the broader community by being an active board member with Geospatial Niagara. This not-for-profit organisation promotes geoliteracy, geographic research and education in the Niagara Region.

The ESRC wishes their warmest congratulation to Dr. Jollineau on receiving this extremely well-deserved award.