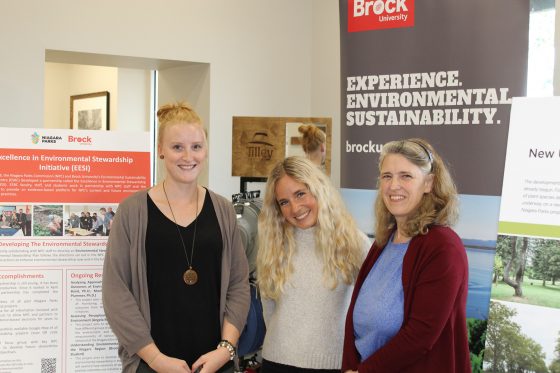 Have you heard? Brock University’s Environmental Sustainability Research Centre (ESRC) and the Niagara Parks Commission (NPC) have formed a partnership called the Excellence in Environmental Stewardship Initiative (EESI). On September 26th and 27th, the NPC held public information sessions to showcase environmental stewardship efforts in the Niagara Region, including the work of the EESI. The sessions proved to be a beneficial experience for graduate students involved in the EESI, and the public. Samantha Witkowski, a first-year student in the Masters of Sustainability program at the ESRC, said, “The experience was valuable for me as it was my first time meeting NPC staff, and my first public information session.  It was fascinating to see all the engagement taking place between collaborators and the public.”

At the session, participants had the opportunity to learn about a variety of stewardship projects that are underway in the Niagara Region. For instance, the NPC has a two-year plan that aims to restore two kilometers of shoreline with native vegetation that will increase diversity while stabilizing the shoreline banks.  Alicia Goddard, another incoming graduate student with the Masters of Sustainability program stated, “I am impressed with the stewardship of the NPC. They are recycling hazardous trees that needed to be removed after they died from Emerald Ash Borer infestation by incorporating them into the Niagara River at select locations, increasing fish habitat.  That’s awesome!”

Since the discovery of Emerald Ash Borer (EAB) beetle on NPC property in 2012, the park has lost a significant number of ash trees.  The park has responded by planting upwards of 20 different species of native trees, which will assist them in reaching their goal of having 75% of the species found in the park returned to the native condition.

Another unique project began in 2004 when NPC partnered with Audubon Cooperative Sanctuary Program. Since that time, six hectares of turf grass on the Niagara Parks’ Legends on the Golf Complex is now returned to a more naturalized state.  An additional four hectares of previous agriculture fields are reforested.  The chemical use continues to be reduced, and water consumption by the golf course has significantly reduced, with 14 hectares removed from irrigation and annual upgrades occurring on the remaining infrastructure.  The Ussher’s Creek habitat is also improving with the addition of nest boxes and monitoring of water quality underway.  The golf course is now a certified Audubon Cooperative Sanctuary.

Meanwhile at the Chippawa Grassland Bird Habitat management plans call for enhancing the existing grasslands by ensuring a variety of mixed native grasses that will not only increase habitat for grassland birds but other species including native pollinators, reptiles, and amphibians.

In addition to these NPC-driven projects, the work of the joint partnership between the NPC and the ESRC was on display. ESRC students and faculty have been assisting the NPC with the development of a ten-year Environmental Stewardship Plan.  The ESRC has conducted an inventory of past stewardship projects allowing the NPC and partners to look back so informed discussions and decisions can be made within a common framework.  This framework has allowed for focus groups to meet and develop stewardship goals and objectives. Check out an interactive map of past and ongoing stewardship efforts.

Additionally, 2nd year ESRC Master’s student Angela Mallette is currently studying how the public views the natural health of the Niagara Glen Nature Reserve, as compared to scientific data in the same area. Concurrently, 2nd year ESRC Master’s student Brooke Kapeller is investigating how the various parts of stewardship across the Niagara Region relate to positive outcomes and success.  As you can see, the EESI partnership between has many benefits, including giving graduate students the opportunity for hands-on work experience and unique research opportunities that further enhance the partnership.

As the NPC works hard at preserving the Niagara Region corridor from Lake Erie to Lake Ontario we hope that you check out their projects and, if you have any suggestions or would like more information, reach out to them!  The initiatives underway will make up NPC plans from 2019 and beyond.