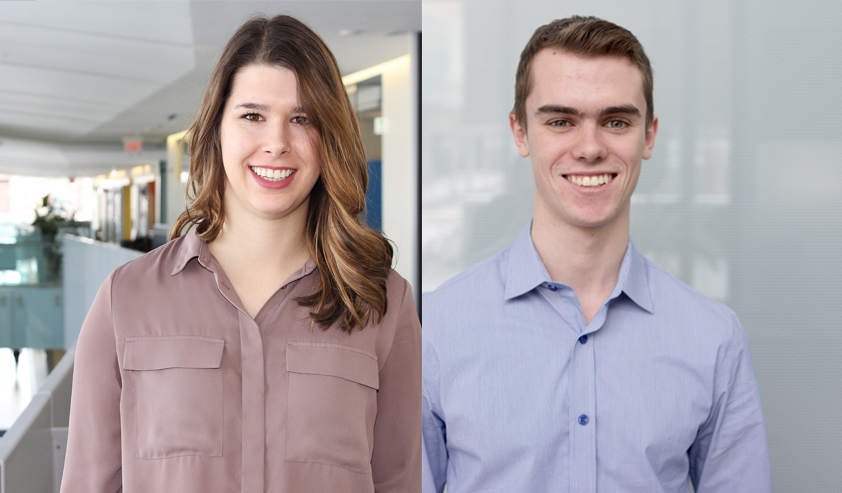 Meghan Birbeck and Jake Berec have each been named Brock’s 2018 Co-op Student of the Year.

Meghan Birbeck and Jake Berec are from different hometowns, studying different programs and at different points in their Brock careers. But they share a common bond — winning Co-op Student of the Year.

The prestigious Brock honour will be awarded to both students on Thursday, March 22 at the Co-op Recognition and Celebration Luncheon where the above-and-beyond effort the winners put in while completing their work terms will be highlighted.

For Birbeck, a 24-year-old Master of Sustainability student originally from Guelph, the journey to co-op success required determination from the outset.

“To get to my work term at the Town of Lincoln, I had to use public transit or ride my bike,” she said. “The trip took me nearly two hours each way.”

However, once she arrived on the job, Birbeck made the most of every opportunity she was given as the Town’s master of sustainability intern.

As well as completing the tasks assigned to her by the Town’s planning, development and public works department, she pursued additional projects and exceeded expectations.

“I was invested in learning from those around me and contributing to what they were doing as well,” she said. “The council meetings I went to were not something I had to attend, but it showed the managers and directors that I was dedicated to learning what was going on and what we needed to do.”

The extra effort led to the chance to make a real impact in the community.

“The mayor mentioned that she wanted a bylaw on trees,” said Birbeck. “So I looked at other bylaws and then wrote one about tree removal. My success on that project led me to be included in the public transit working group and eventually to present my findings on public transit to town council.”

While Birbeck was excelling at the Town of Lincoln, Berec, a 21-year-old Bachelor of Business Administration student in Brock’s Goodman School of Business, was making similar waves during his work term in RBC’s Caribbean Banking digital team in Toronto.

The team was tasked with building the online platform that all of RBC’s clients in the Caribbean now use.

To best contribute to the project’s success, Berec knew that he needed to bring a fresh set of eyes to the task at hand.

“I think what led to my success was being able to dive in and take the lead on projects while not being afraid of breaking old processes and causing a little bit of disruption,” said the Simcoe native. “I brought value by giving a new perspective to old problems.”

Berec used his co-op experience as an opportunity to improve his interpersonal skills.

“I was not the most outgoing person, but co-op has helped me break out of my shell and make my opinion heard when I can add value to a conversation,” he said.

Having received the highest honour the University can bestow on its co-op students, the pair hope to continue the legacy of the program by employing co-op students of their own some day.

“I would definitely hire co-op students and I would try to make sure they were from Brock,” said Berec.

Hiring students offers employers the chance to build bonds with prospective hires in the early days of their career, he said.

Though neither winner is currently in a position to hire students themselves, they have learned from experienced leaders who will also be honoured by the University this year.

Berec attributes his success to support from the management teams as well as those who oversee co-op programming at Brock. “I couldn’t have done it without all of the support I had,” he said.

While she will cherish the co-op award, Birbeck said it’s the experience she received that is truly invaluable. She hopes to inspire others at the University to choose a co-op route.

“It’s great to have the theoretical background from your undergrad or master’s, but if you want to get into a professional job or career you need to be able to show employers what you are able to actually do,” she said. “Co-op gives you the chance to get that professional experience.”

The Co-op Student of the Year presentation will take place Thursday, March 22 during the Co-op Recognition and Celebration Luncheon. The celebration will also recognize the Spring/Summer and Fall terms distinguished co-op supervisors.