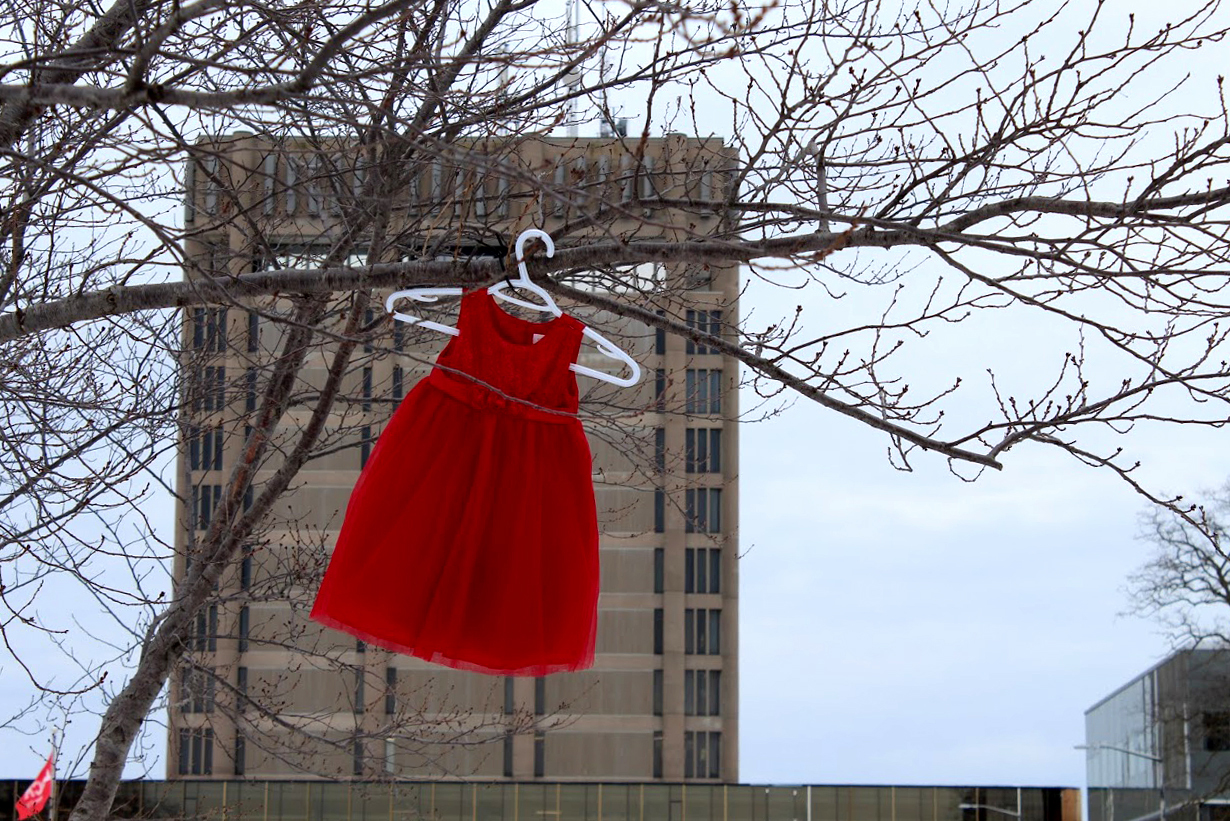 In Ojibway, Mashkawizii means “she has inner strength.”

That strength was harnessed during a powerful event held at Brock University last week to draw attention to the crisis of missing and murdered Indigenous women and girls.

The REDress Project’s second annual initiative saw flowing red gowns hung outside around Brock University’s main campus and Rodman Hall Art Centre, as well as inside at the Marilyn I. Walker School of Fine and Performing Arts in downtown St. Catharines.

Each dress was meant to represent the spirit of a missing or murdered Indigenous female. 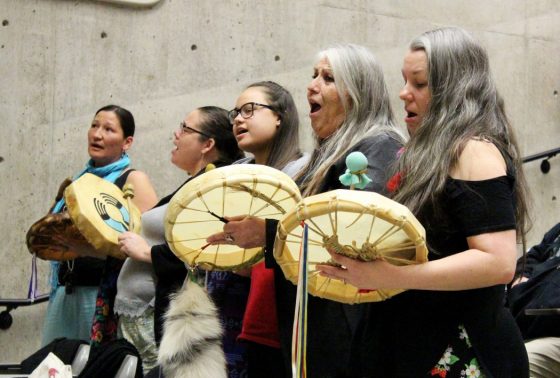 Members of the women’s drum group from the Fort Erie Native Friendship Centre accompanied the speakers at the REDress event.

The Feb. 14 event culminated in presentations in Thistle Complex by local Indigenous women who shared messages of pain, resilience and hope.

Following a smudging ceremony, Robyn Bourgeois, an Indigenous scholar and Assistant Professor in the Centre for Women’s and Gender Studies, welcomed guests and introduced speakers Eileen and Sheena Joseph, Lyn Trudeau and Leona Skye — all “people who have felt this trauma personally,” Bourgeois said.

Eileen Joseph shared the story of her daughter, Shelly, who was murdered. The tragedy left Eileen to raise her then infant granddaughter, Sheena.

Years later, Eileen and Sheena have, with quiet determination, learned to support one another as well as fellow survivors.

Addressing the crowd through tears at the event, Sheena, now a mother herself, offered love to those in attendance who themselves were suffering.

Brock PhD student and instructor Lyn Trudeau presented her response to a recent stage production of Pig Girl about the Robert Pickton murders, a play she called “obscene” and “disrespectful.” Originally written and produced by a non-Indigenous team, it has since been re-imagined and presented by Indigenous players.

A self-described advocate and survivor of human trafficking, artist Leona Skye was once numbered among Canada’s missing and murdered Indigenous women and girls.

Her name was removed from the list only two years ago when “they realized I’d been found,” she said.

She spoke not only about the abuse she suffered since she was a young child, but also of the compassion she eventually felt for her “first pimp,” her father who had himself been abused in the residential school system.

In her talk, Trudeau quoted a Cheyenne proverb: “A nation is not conquered until the hearts of its women are on the ground. Then it is finished; no matter how brave its warriors or how strong their weapons.”

This year’s REDress event called Hearts of our Nations was a testament to the strength and resilience of Indigenous women in Canada.

“We’re still here,” said Bourgeois. “This is the largest gathering of Indigenous women on campus.”

The event was punctuated by song from the women’s drum group from the Fort Erie Native Friendship Centre.

The REDress project, founded by Métis artist Jamie Black, aims to focus attention on the issue of gender- and race-based violence in Canada.