Arts centres on time and on budget: Brock, St. Catharines 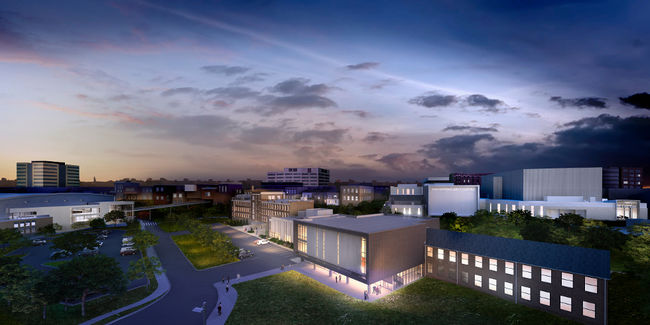 Construction on both the city’s Performing Arts Centre and Brock University’s Marilyn I. Walker School of Fine and Performing Arts is on time and on budget – but the recent cold snap has forced the city’s contractor to rent ground-thawing equipment.

Brock president Jack Lightstone told St. Catharines councillors it’s been seven years since he first made a presentation to council suggesting a partnership to revitalize downtown, and he said Brock continues to be “proud to be a partner and supporter of St. Catharines and Niagara.”

With an anticipated enrolment of 500 students plus faculty and staff, and the city’s construction of an adjacent performing arts centre, the Walker school of art “will truly revitalize the downtown core of the city,” Lightstone said.

Brock’s VP of finance and administration, Brian Hutchings, said construction and renovations on Brock’s part of the project are “50% done, and we are on time and on budget.”

Showing pictures to council, Hutchings said the university is preserving much of the character of the former Canada Hair Cloth building, by showcasing wooden pillars, exposed masonry and existing windows.

Douglas Kneale, Brock’s Dean of Humanities, said turning the former factory building into classrooms and rehearsal studios “is the perfect metaphor for St. Catharines’ industrial past and post-industrial future.”

Meanwhile a significant part of the foundation has been poured for the city’s performing arts centre project. An aerial shot of the site, taken recently, shows the elevator shaft on the left, next to the crane, and a dark hole in the centre of the frame, which will provide the stairway access to Brock’s school of arts, said St. Patrick’s Coun. Mark Elliott. On the bottom left is bare earth which will be the site of Partridge Hall, the centre’s biggest venue with 775 seats, which will boast sophisticated and invisible acoustical panels which can be automatically adjusted for the type of concert or event.

Parks and recreation director Rick Lane said the city’s project is also on time and on budget, although the cold weather which has frozen the ground has posed some problems for Bird Construction, which has been using heaters to thaw the earth so they can continue with necessary excavation.

Mayor Brian McMullan thanked Lightstone for the “vision and passion” he has brought to the project, and said it was “one of the reasons it succeeded and it will truly be a transformative project.”