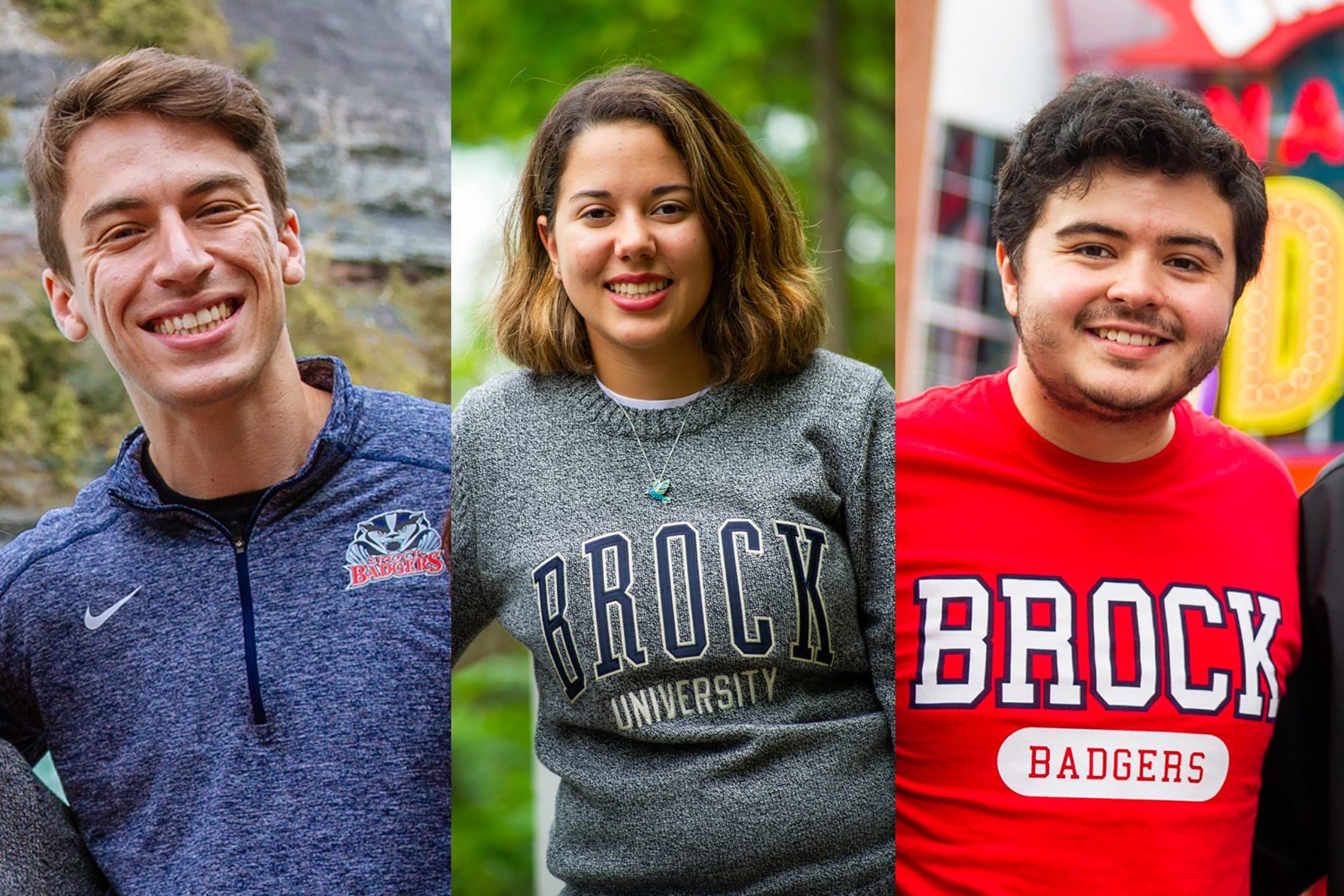 If you’ve walked the halls of Brock University or tuned into Brock International’s social media channels over the past four years, chances are you know them.

Marcelo Correa from Brazil, Ana Ferreira from Trinidad and Tobago and Santiago Negret Rey from Colombia have been leaders within Brock’s international community throughout their undergraduate studies.

They were first introduced as part of the inaugural group of 10 International Student Ambassadors in 2017 during Brock International’s Open House. Their academic achievements and community engagement both on and off campus saw them selected for the annual award every year of their academic career.

“I had many opportunities to interact with students in person,” said Rey. “Getting to show them around campus and answering their questions will always be some of my fondest memories of the position.”

In their final year, the three were appointed to new roles as part of the scholarship, serving as mentors to the 2020-21 group of International Student Ambassadors.

“I continued to talk to international students, from prospective to incoming and even senior students,” said Correa. “But being able to support younger ambassadors to succeed in their role and guide them in their projects was very fulfilling.”

Now that they’re set to graduate during Brock’s 109th Convocation on Friday, June 18, the trio looked back on their time at Brock University and reflected on their accomplishments outside of their ambassador roles.

Ferreira, who’s graduating with a Bachelor of Kinesiology, is set to receive the Distinguished Graduate Award, which is presented to the student with the highest graduating average in their program. She also founded the Brock Eco Society, a sustainability student club on campus that advocates for environmental change and sustainable practices throughout the Brock and local community.

“I hope to see the club live on for many years and tackle environmental issues to preserve and clean our water resources, especially in areas of need such as in Indigenous communities that still do not have proper access to clean water,” said Ferreira.

Correa, who’s graduating with a Bachelor of Science in Biotechnology, united two of his passions at Brock, science and volleyball. He may be remembered most for his time on the court as captain of the men’s volleyball team from 2016 to 2020, but his work in the lab will serve as the foundation for his upcoming career.

“Helping to produce knowledge and being at the forefront of new discoveries is very exciting,” he said.

Under the supervision of Professor of Chemistry Jeffrey Atkinson, a group of students including Correa were able to genetically engineer bacteria to produce an important human protein.

Rey, who’s graduating with a Bachelor of Game Programming, is proud of his contribution to Capstone, a year-long game development project. He was part of a team of students who worked together on all stages of developing a game using industry practices and guidance from instructors.

“Getting to interact with a team of incredibly talented people and making a game together over the course of an unusual school year was incredibly rewarding,” said Rey. “What we accomplished set the bar for all our future projects and made for a wonderful addition to everyone’s resume.”

This year, Rey and his teammates developed a single-player puzzle game called Guardian Angel for Hire, which has 13 levels spread over three distinct areas and a heartwarming storyline.

Correa, Ferreira and Rey all credit the experiential learning components of their degree for preparing them for their upcoming careers.

“It allowed me to get hands-on experience in my field before graduating, leaving me with an impressive resume,” said Ferreira.

Correa felt Brock gave him the perfect amount of theory and hands-on practice.

“Through my academic and extracurricular involvements, I was taught how to effectively connect with people, as well as how to work independently and efficiently,” Correa said. “Having closer attention from professors and TAs was very helpful to develop my skills.”

Rey felt fortunate to have a number of professors and instructors who were industry professionals, giving him the opportunity to gather insight on a future career in game development.

“I had an internship course where I got to practise game development over the course of a term, giving me a space to work in a professional setting,” he said. “I graduate knowing I have plenty of hands-on experience and industry know-how, which in today’s market makes for a very compelling resume.”

The trio, who seemed inseparable throughout their studies, now part ways to take on the next chapter of their lives.

Ferreira is exploring opportunities in her field of study as she works towards becoming a registered kinesiologist in Ontario. Correa plans to pursue graduate studies for biotechnology in the hopes of one day becoming a research scientist. Rey is setting down roots in Niagara as a member of the Brock community. Starting June 14, he will begin a new role with Brock’s Department of International Market Development as a Recruitment Officer.