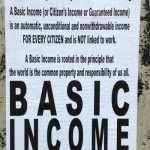 A Basic Income Guarantee (BIG) is a minimum income adequate to pay for life’s necessities: food, shelter, heat, clothing. It’s accessible to every individual when and if needed. Known by a variety of other names, most frequently Guaranteed Annual Income or Citizen’s Income, BIG creates a solid income floor for us all. It will both eliminate deep poverty and substantially alleviate the income insecurity afflicting ever more Canadians. In contrast to welfare programs, BIG is unconditional; most notably there are no work requirements. Nor are recipients required to liquidate all assets  (eg, homes, cars) or to submit to various bureaucratic rules about how they live and spend their money. BIG is simple and inexpensive to administer, respectful of the autonomy of recipients, free of the stigma and hassle of the current maze of programs and designed to avoid the work disincentives that plague them. It would displace some but not all income support programs; not, for example, EI or CPP, but certainly welfare.

Creating an effective complement of programs in our federal system is complex. It must ultimately be done by Governments which have access to the necessary data, expertise, and control of budget design. But so long as the basic income amount is adequate, there should be no more food insecurity and homelessness in Canada. BIG costs less than the consequences of poverty now cost us and it will bring about very substantial downstream savings. In addition, BIG, like universal health care, is there for any one facing a crisis – in this case a financial one.  Like health care, it both acknowledges and concretizes a commitment to collective interdependence. BIG is deliberately inclusive, proclaiming that everyone here is ‘one of us’ rather than ‘another of them’. It will help heal our wounded body politic, and bring the satisfaction of rebuilding a just and humane country.

BIG is transformative. Recipients’ ability to engage in entrepreneurial, artistic, volunteer, and political activity is enhanced; workers ability to bargain for better job conditions and wages (and to strike if necessary) is strengthened; children can focus at school as can workers on the job, both groups relieved of hunger and the many stresses attendant on poverty; high school completions increase; women abused in their homes are able to support their children if they leave the abusers; mental and physical health improve; participation in community life and democratic politics becomes more possible.

BIG is a fully developed form of “cash transfer”. More modest income support programs are in use in many jurisdictions. There are large scale programs in Brazil, Mexico and Alaska (the last uniquely conceived but equally effective); the Swiss will hold a referendum soon on whether or not to implement a nationwide BIG; there are several pilot projects ongoing or recently completed in, among others, India, Namibia, London UK, and New York City.

Studies of the efficacy of these programs are being generated by scholars and activists worldwide. Positive impacts have been documented by the World Bank and the OECD. Brazil’s highly successful “Bolsa Familia” is supported by both the World Bank (which participated in its design) and the IMF. It has been in place since 2003 and now reaches over 50 million people. A Canadian BIG experiment (MINCOME) was conducted in the 1970′s in Dauphin, Manitoba. Recent analysis of MINCOME data by Dr. Evelyn Forget shows a significant reduction in health care costs and an increase in high school completion rates in less than four years’ time. There was no unacceptable work disincentive – teenage boys stayed longer in high school and mothers longer at home with infants.

Canada’s BIEN affiliate, the Basic Income Canada Network, was founded in 2009, our national activist campaign, The BIG Push in 2013. The campaign’s first goal is to raise awareness and foster public discussion of BIG; second, we seek to persuade as many political actors as we can to champion the concept. To those ends, last Fall our Kingston Action Group began a drive to increase the number of BIG activist groups in Ontario and to strengthen the network among them and across the country. A list of Canadian resources, current to February 13, 2015, has been created by the co-founder of our group, Elaine Power.

The BIG Push campaign is growing at a healthy pace; however, research is needed into many different questions – for example:

My hope is that readers will be sufficiently intrigued and challenged by the BIG project to undertake more research specifically focused on issues surrounding BIG’s implementation within the Canadian federal political and fiscal systems. Supportive readers can register their support and check out other aspects of the campaign at biencanada.ca/become-involved.

Currently, in Ontario alone, there are groups in Kingston, Ottawa, Toronto, the Fort Erie Region, the Halton area region, Sault Ste. Marie, Kitchener-Waterloo, London, and Peterborough.   St. Catharines would be in good company, if there is someone who would like to take up the challenge. Activists interested in founding a BIG Action Group, in St. Catharines or elsewhere in Canada, or who would like contact information for the group in their own area are urged to email Toni Pickard at tpickard1@cogeco.ca.

Author Biography
As a law professor at Queen’s University, Toni Pickard taught and focused her research on criminal law in addition to developing a variety of new course offerings such as Non-Adversarial Lawyering Tasks, Issues surrounding the Jury, Law and Social Theory, Empirical Research and Law, Critical Perspectives on Law. She co-authored “Dimensions of Criminal Law” with Phil Goldman of the Queen’s Political Studies Department. Her activist work has included, e.g., anti-nuclear civil disobedience, University anti-racism advocacy and counselling, coordinating student staff and faculty efforts in the Queen’s campaign for divestment from South Africa. After retiring, she returned to her study of the cello, too long neglected. In 2013, inspired by BIG’s potential to address many of the problems facing Canada and a world dominated by neoliberal ideology and political control, she co-founded the Kingston Action Group for a Basic Income Guarantee with Professor Elaine Power of the Queen’s School of Kinesiology and Health Studies.