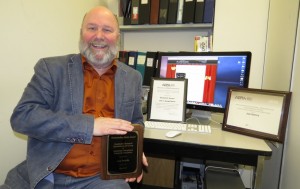 It has been a busy spring for Joe Norris.

In the midst of packing up his office to transfer to the new Marilyn I. Walker School of Fine and Performing Arts, the dramatic arts professor added three newly acquired items to take with him: two awards from the American Educational Research Association and one from Brock University.

They were recognized for their book, Understanding Qualitative Research: Duoethnography, which Norris and Sawyer co-wrote. The book details the duo’s new research methodology called “duoethnography.”

This involves two people conversing with one another on the same subject from very different viewpoints. As they gain insights and knowledge through the course of the conversation, the two people begin to change their perspectives. These changes in viewpoints become the research data.

This differs from traditional information-gathering methods, such as using questionnaires, surveys, interviews, observations and other methods.

“It is rewarding to know that something you’ve created supports the work of a large number of people,” says Norris of his recognitions and his focus on creating and developing unique research methodologies. “People have come up to me and said I’ve been able to provide a rationale that gives them justification for what they want or need to do.”