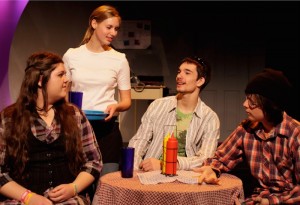 When young people are given the chance to tell their own stories in their own ways, amazing things can happen.

They produce plays that are both entertaining and informative. They deepen understanding of racism, bullying and other issues with which society grapples.

And they win international awards that affirm their creative ideas and work.

Such is the case with Commotion, a documentary arising out of a project of the same name that Department of Dramatic Arts associate professor Gyllian Raby and Carousel Players artistic director Pablo Felices Luna created three years ago in partnership with community groups.

Commotion captured two Prestige Film Awards for 2015: the Gold Award in the Educational/Instructional category, and the Silver Award for Research.

“You can be justifiably proud of winning a Prestige Film Award,” the organization wrote in an e-mail to Raby. “The judging standards are high and winning means the technique and imagination exhibited by your entry is outstanding and stands above other productions.”

The film documents the work of the Commotion project, in which 80 students at six Niagara high schools produced and performed their original, one-act plays depicting a variety of issues they identified as being concerns to them.

The students created the productions – which explored such themes as the impact of social media on young people, gender relations, death, racism, bullying and Internet danger – using a methodology called “RSVP.”