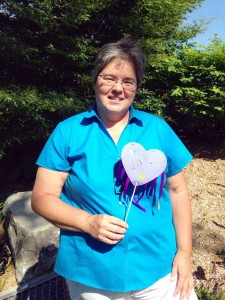 Sherri Vansickle and her students went on a planting spree recently.

Vansickle, a lecturer in the Tecumseh Centre for Aboriginal Research and Education, her two classes, and members of the Canadian Union of Public Employees (CUPE) 4207 staked 900 colourful foam hearts amongst the ornamental grasses, shrubs and flowers filling gardens throughout the Brock campus.

But more than a splash of colour to spruce up University grounds, the hearts decorated with sparkles, ribbons and personal messages honoured children lost to Canada’s Indian residential school system between the 1840s when the first school opened and 1996 when the last one closed.

One of them was Vansickle’s grandmother, Ariel. In her memory, Vansickle tucked a purple heart, adorned with purple ribbon the colour of the Haudenosaunee Confederacy and tiny rhinestones spelling Ariel’s name, into a protected plot across from Welch Hall.

Horrific stories about life in Canada’s residential schools have only started to be told in the past 20 years since the last one closed, but Ariel, who physically survived her time at a residential school near Brantford, never spoke about her experience, Vansickle said.

“It’s actually pretty fresh and that made it very hard for her. But a lot of people don’t want to talk about it,” Vansickle said. “People think it’s way back in history but it’s not that far back.”

The hearts, created in Vansickle’s Aboriginal Arts and Spirituality classes, were part of the Honouring Memories: Planting Dreams project, a nationwide initiative led by the First Nations Child and Caring Society of Canada.