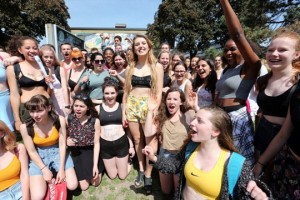 Teens’ push against dress codes could be a sign of social shift, expert says

TORONTO — Students may have been rebelling against school-imposed dress codes for decades, but observers say the fact that those protests are now making national headlines suggests a fundamental shift in social attitudes.

Social media has allowed students both to share their own experiences with a wider audience and read about similar occurrences from further afield.

The result, experts say, is that individual incidents become part of an ongoing, global conversation about complex issues such as freedom of expression, cultural identity and sexual consent.

All of these topics can be tied back to dress codes according to Rebecca Raby, a sociologist in Brock University’s department of Child and Youth Studies.

According to her research, which specifically explored the impact of clothing rules in secondary schools, placing limits on people’s attire sends subtle messages about what’s acceptable in society.

“There’s lots going on when you have a dress code,” Raby said in a telephone interview. “Dress is very subjective, … and when schools try to regulate it, they’re trying to regulate dress of really diverse populations, including diverse ages, who have different kinds of norms. And they’re trying to enforce one norm.”

Spaghetti straps. Ultra-short skirts. Excessive cleavage. Midriff-baring tops. Shorts with a hem shorter than where a person’s fingertips graze when they are standing.

School dress codes across Canada prohibit all young people from wearing a wide range of potentially inappropriate clothes. But lately more girls are crying foul at rules they say unfairly target their wardrobes.

This week, 17-year-old Lauren Wiggins took a stand against “unjust standards” after receiving a detention for wearing a full-length halter dress that she says school officials considered “inappropriate” and a “sexual distraction.”

Over the years, many schools have tended to restrict girls clothing to prevent distracting their male counterparts. But that misguided solution sends the wrong message to both genders, social researchers say, painting girls as shameful seductresses that must be contained and boys as aggressors unable to control their primal urges.

“It’s demeaning to girls because it teaches them that their bodies are contaminated, distracting and evil,” says Shauna Pomerantz, a Brock University child and youth studies associate professor and author of Girls, Style and School Identities: Dressing the Part.

“It’s demeaning to boys because it teaches them that they don’t know how to take responsibility for their actions.”