I was very lucky to have the chance to attend the Peoples’ Social Forum in Ottawa August 21-24. We were lucky to have a school bus that was very affordable coming from St. Catharines, and I really want to thank Nona Bader and everyone that helped her for making this possible! I also want to thank Rachel Hirsch for all her work and being a great forum companion and the SJRI for making it possible for me to attend.

This blog article offers a summary of the activities I attended throughout the forum.

Naomi spoke about building a movement against climate change. She insisted that we must propose real alternatives if we want to challenge climate change and that we need to start showing these alternatives instead of just talking about them. For many people to join the fight to end climate change, another economic vision must be offered. An example she provided was of building a solar and wind powered barn in the route of where the pipeline is proposed to go. She argues that we need a movement capable of how we come together in crisis, but that this doesn’t have to be a shiny new movement, climate change can be the force that brings together all the movements that are already in place. She also spoke about addressing inequality and healing colonial wounds, addressing the fact that climate change affects disproportionately affects the most marginalized people. View live footage from this talk. 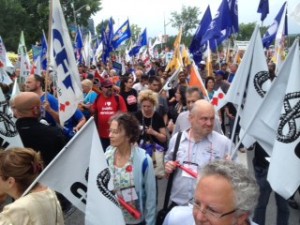 We started the unity march at Portage Bridge and marched to Parliament Hill. The march was exhilarating with lots of people in attendance and lots of energy! When we reached Parliament Hill, Harsha Walia, Hassan Tussuff and Gabriel Nadeau Dubois spoke. The speakers were followed by amazing and inspirational music. This event really set the tone for the rest of the forum and got people excited to be together and to carry these lessons forward after the forum.

This workshop was conducted by a group of individuals from Halifax, in which many have different viewpoints from Marxists to Anarchists, but have come together to form an organization in which to challenge capitalism and work in solidarity with many organizations to promote a progressive agenda in Halifax and more broadly in Canada. The members emphasize solidarity within their group and expressed that they have disagreements but also a willingness to engage in discussions in a respectful way. They have been involved in setting up many conferences and in solidarity events such as picketing at Ikea, and Canada Post strategies.

This workshop was presented by an Algonquin First Nations Woman named Annie St. George, along with her husband of 42 years, Robert. Annie spoke about the need for a change in our criminal justice system in Canada. Aboriginal male inmates account for 26% of the prison population but only 3.5 of the population in the Canada. She spoke about the need to rehabilitate and repair the damage that has been done by colonialism and the residential school system, as well as continued discrimination. Her goal of the social forum was a chance to work and heal together. Annie spoke about The Gladue Report, which is an alternative to sentencing for Aboriginal offenders. The Gladue Report suggests that judges must look into the offenders post traumatic background and take this into account when sentencing. Thus, the results would be that they offender would be sent to a healing centre, rather than to prison. Annie spoke about how we must insist that The Gladue Report become a part of the sentencing procedure in all provinces, as it is only being used currently in B. C. Furthermore, The Gladue is only used for sentences that are longer than 3 months. Annie argues that we need to be using The Gladue in less serious cases because it can be prevent more serious offending in the future. She also argues that they need to involve Aboriginal Elders into the making of The Gladue and into the courts.

War and the Progressive Movements in Afghanistan and Pakistan

Malalai Joya was supposed to be speaking at this event, but unfortunately, she was not issued her visa to Canada in time. She did provide a written speech in which she spoke about Afghanistan and how the US never wanted a democratic system, they wanted a government that supported the US. She spoke about how US troops need to leave Afghanistan because it spurs anger. She also spoke about how the struggle and resistance in Gaza is an inspiration to us all. She finished with “where there is oppression there is resistance too”.

Jahanzeb Hussain then spoke about what we can do here to support progressive movements in Pakistan and Afghanistan. He suggested that we need to call on our government to transform our polies that affect those regions, not send troops.

In this workshop, three women, one from Ottawa, one from Toronto and one from China currently residing in Toronto spoke about their experiences with sex work and working with sex workers, specifically migrant sex workers. As of July 2012, no one is allowed to come to Canada to do sex work, which means that people must come illegally to do sex work here. They also spoke about how this illegal status (and the illegal status of sex work in general with Bill C-36) makes sex work more dangerous. One of the women use to do sex worker advocacy in China and found that the anti- trafficking discourse makes women more vulnerable. As well, in Berma, China, if anyone helps a sex worker they become illegal too, this includes doctors. In Canada, Bill C-36 gives more power to police and makes sex work increasingly unsafe, especially for migrant sex workers since they will be the first to be targeted. 94% of people arrested are street workers and this is only a small amount of sex work. So, more marginal sex workers are targeted as well as racialized sex workers

I was incredibly excited to see that there was a workshop on harm reduction for injection drug use at the PSF. I have found in the past that this has been something that hasn’t been often included in conferences or discussion of social justice. Also, I am biased since my MA work is about safe injection sites in Toronto. Thus, I was very excited to meet the people that were doing this advocacy work in Ottawa. Ottawa has an amazing drug users’ network with over 250 members. They have accomplished many things such as memorials for friends and family who have passed away due to overdose that could have been avoidable if there was a safe injection site in Ottawa. Three of the members from the drug users’ network were present at the workshop and it was such a pleasure to meet them as they are amazing advocates for the rights of drug users in Ottawa and throughout the country.