I would like to thank Dr. Raddon and Dr. Hirsch for selecting me to be one of the Transdisciplinary Witnesses to the Peoples’ Social Forum in Ottawa.  It was quite a journey.

I immediately decided that I wanted to take this opportunity to expand my vocabulary and worldview around a variety of social justice issues.  A plethora of activities, movies, and speakers provided me with an almost overwhelming wealth of opportunities to grow in my knowledge and understanding of how social justice looks, tastes, sounds, smells and feels.  Because I was there for the whole experience I tried things that I would normally not try.  I also did my best to learn about and support our First Nations brothers and sisters in their struggles from coast to coast to coast.

What struck me the most was the passion with which the presenters approached their collective topics.  It was incredibly transparent to see how invested they are in their social justice issues.  There was too much to experience and not enough time! 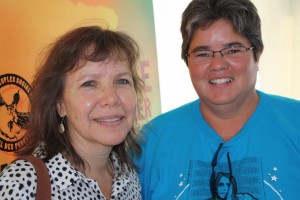 I have been fortunate enough to have been raised and influenced by some very strong Native women.  I was able to meet a Kanien’keha:ka (Mohawk) woman whom I respect very much – Ellen Gabriel.  She was asked to be the Haudenosaunee speaker for the Confederacy during Oka.  She eloquently educated us about good leadership, the environment, politics, missing and murdered Native women, and so much more.  I was reminded yet again that many of the privileges I enjoy are due to strong women like Ellen who make sacrifices and use their gifts and talents to make life better for us. 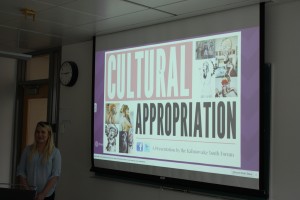 about leadership in social movements so that I could support our young Native leaders.  Jessica Deer did a great job presenting some controversial issues around the cultural appropriation of Native images in society and certainly gave us much to consider.  She showed some great examples of top fashion designers who use headdresses in their advertising, inappropriate Halloween costumes and derogatory sports team names and logos.  I would like to invite Jessica to visit the Niagara area and give her talk. 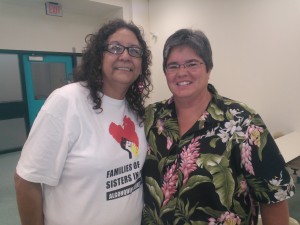 One of the most memorable presentations for me was two Algonquian women who presented about the Families of Sisters in Spirit.  This group educates others about the missing and murdered Native women in Canada, telling those stories from the perspective of the families who have been affected.  Both of their stories were heart wrenching because the faces of these murdered women became more than just pictures in a newspaper, rather, they were the very much loved family of women standing before me.  I was inspired by their determination to carry on through their own grief in order to ensure that other Native women and their families would not be so unfortunate as to walk the same dark and lonely path.  My favourite part of this presentation was the hugs at the end!!!   Nya:wen to Bridget Tolley and Colleen Cardinal for having the strength and courage to share your powerful journey!

So, what are the next steps on my journey?  Actually, my next steps are going to be quite literal steps.  On October 4, I will be joining some of my students at Brock, as we support the efforts of the Niagara Chapter of Native Women to raise awareness of the Sisters in Spirit campaign.  I will make my #AM I NEXT sign and carry it with me as we challenge the colonial violence against Native women by participating in the vigil to honour our missing and murdered sisters.  I would also like to present at the Niagara Social Justice Forum in the new year with a few of my students to keep these very important issues in the forefront as we continue to campaign for a National Inquiry.

Nobel Peace Laureate and Holocaust survivor Elie Wiesel, said, “I swore never to be silent whenever and wherever human beings endure suffering and humiliation.  We must always take sides. Neutrality helps the oppressor, never the victim. Silence encourages the tormentor, never the tormented.”  Experiencing the People’s Social Forum will definitely help me use my voice in a good way.