Intersectionality in Classics: A Conversation with Professor Allison Glazebrook

Have you ever wondered how professors come to study the topics they do?

Keegan Bruce, a fourth year Classics major and a volunteer Social Media Ambassador for the Faculty of Humanities, interviewed Professor Allison Glazebrook to find out how she came to research gender and sexuality in the ancient world, and to get some advice on her own career path.

Dr. Glazebrook has been a professor at Brock since 2003. Her lengthy list of publications include Houses of Ill Repute: The Archaeology of Brothels, Houses, and Taverns in the Greek World (University of Pennsylvania Press, 2016) and, most recently, she has co-edited Themes in Greek Society and Culture.

You can read more about Dr. Glazebrook and her work on her department profile. 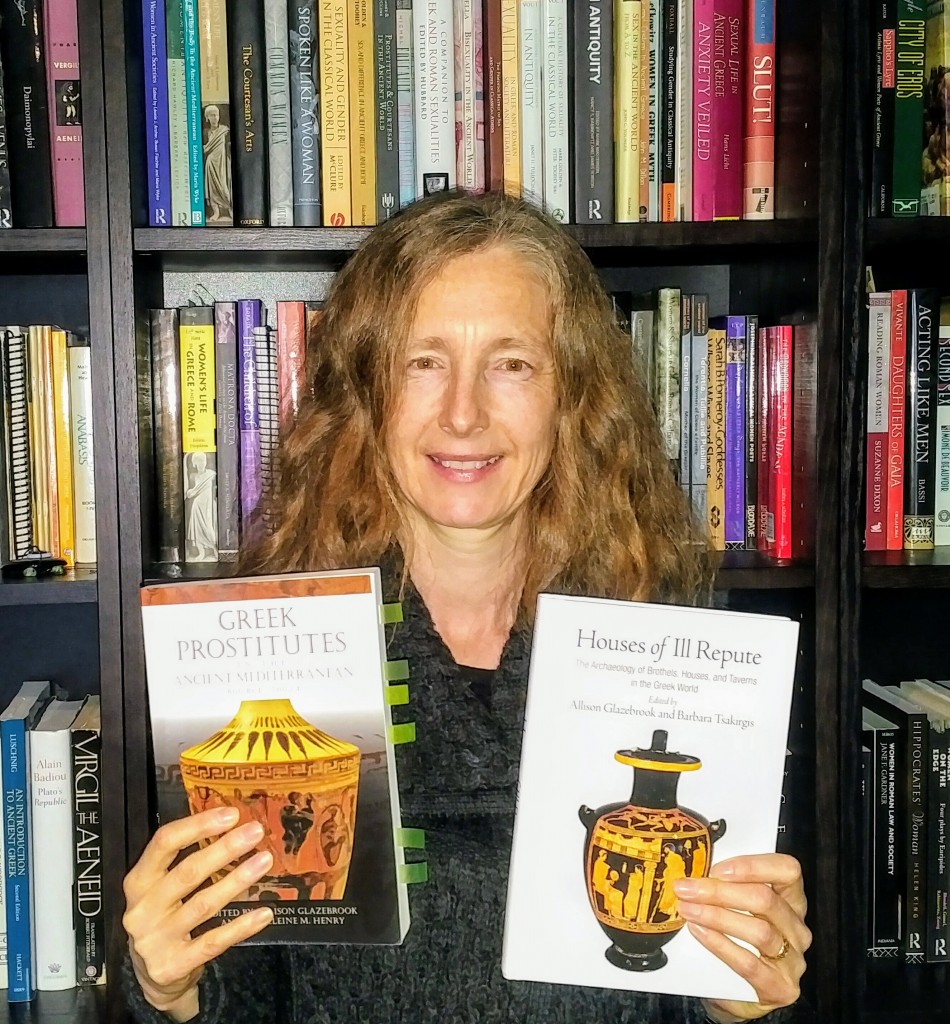 Dr. Allison Glazebrook of the Department of Classics with two of her edited volumes, "Greek Prostitutes in the Ancient Mediterranean" (2011) and "Houses of Ill Repute: The Archaeology of Brothels, Houses, and Taverns in the Greek World" (2016).

If you had asked me at the end of last year what I wanted to spend my life doing, I’d have had no idea what to tell you. If you were to ask me now, I’d laugh that terrified laugh all master’s applicants have and say, “I want to make Classics more intersectional.” Do I know exactly what that means yet? No, absolutely not, but I know that I want to do it and I have the beginnings of an idea.

Generally, intersectional approaches to research consider the sub-groups within groups and the differing experiences of different groups of people. I want to actively challenge the white male western-centric thinking so prevalent in the past and today’s scholarship. I believe that it is the responsibility of the scholar to challenge biased interpretations. Our own assumptions and biases must be examined so that the message put forth is not one of continued harm to underrepresented groups, but of genuine analysis. Which, wow, that’s a big thing to fit into the narrow pocket of the ancient world.

For guidance, I turned to Dr. Allison Glazebrook, who was kind enough to sit down and talk with me over a coffee. Dr. Glazebrook has been looking at Classics from an intersectional perspective since her Master’s degree in the 90s which, as she will tell you, was not exactly a mainstream approach. She researches gender, sexuality, and slavery within the ancient world, specifically sexual labour (in which all three converge).

She didn’t start out that way. As an undergraduate student, she was mostly exposed to military and political history and it was not until she read Ovid’s Heroides that something sparked: “he was writing from a female perspective, giving a voice to what was lost. I was drawn to that.”

From there, the spark grew. When in her Master’s she gave a presentation on Roman education, something far outside her field at the time, she discovered an interest in the education of women. “I went to my supervisor and told her what I wanted to do and she was very excited; she’d been waiting for someone to research women.” When she learned that, generally, the only women educated in the Greek world were high ranking sex slaves, she grew more interested.

It was in her PhD candidacy that the spark became a flame.

“We were looking at sex slaves from the wrong perspective,” she says, “women were static, they were in categories. It was about male access to those categories rather than the female experience. I wanted to start reading texts from the other side and I found that the experience for women was varied and so much more than porne (common sex worker) vs hetaera (upper class sex worker).”

Since then, she’s been interested in “flipping the perspective”.

“Greeks love binaries,” she says, “us and them. But the reality wasn’t binary, it was a spectrum. Scholars, myself included, had been thinking in these binaries too, porne vs hetaira, but the reality was so much more complex. Hetairai were fetishized in the research, there was a fascination with them that really didn’t reflect the diversity of sex workers in ancient Greece.”

When she started this research, she was met with confusion.

“People questioned my sexuality, my past,” she says. “like, ‘you must be different for looking at this’”.

She tells me about a job interview: “They said to me, “okay, that’s fine as a side-interest, but what’s the real history that you do?’” She laughs. “People were so offended at the concept of brothels in Athens! Like they couldn’t exist! It didn’t fit with their ideas. But Greece and Rome are just cultures, like ours is a culture, just like other cultures from all over the world throughout time. It’s no better or worse, it’s just different.”

Dr. Glazebrook tells me how people were uncomfortable and defensive about her area of study. “It was very marginal at the time. It affected how I did my scholarship. I’ve done some edited volumes that focus on the brothel instead of the hetaira. It helps to make the topic mainstream, the more people you get working on it. I had to build a community because there was resistance to the topic. You need to build a community. I organized conference panels, attended conferences, included senior and junior scholars in edited volumes to make it more mainstream. And now it is.”

Dr. Glazebrook looks at other areas of study in her research. She took a class on feminist theory as a PhD student and her focus shifted from a historical perspective to a socio-cultural one: “I started thinking about constructed categories, which was very helpful.”

Due to little published research on sexual labour in ancient Greece when she started, she read texts from Rome to the Early Modern period to the modern day. She read the work of Margo St. James, Maggie O’Neill, and about prostitute discourse theory, getting the perspective of sex workers on sex work. There was a divide between feminism and sex workers at that time so what she needed wasn’t in her classes. She read Denise Riley’s Am I That Name, “a critique on feminism and the idea of ‘women’ as a single historical category, as opposed to the true complexities of the term in relation to other categories. Woman is not a static category.”

To Dr. Glazebrook, looking beyond your experience is crucial to research and it’s something she tries to teach her students.

“We all have perspectives,” she says and her voice shifts to the ‘professor’ tone I’ve heard many times, “No one is objective, there’s always an element of subjectivity. We are enclosed in our own time period. The job of the historian is to be aware of that and try to break out of that.”

She tells me of the time she read a book written by a man on ancient women in 1956: “It was horrifying! He couldn’t see that he wasn’t making a helpful analysis—he was just objectifying the figures presented. It didn’t make sense.”

She hopes to prevent her students from being close-minded to alternative ideas and becoming stuck in their own perspective. “They need to challenge their perspectives. It’s a lifelong journey; we have to keep reexamining and understanding how our background affects how we think about things and interact with things. We have to try to break out of that.”

I asked her for advice. How can I be intersectional? How can I respect the voices I’m looking for? Her reply:

“Read widely. Be open to different types of evidence. Be aware of the aspects of culture. Read from other time periods and fields, even in the modern day. How are other areas approaching your topic? Not that the modern day is equal to the past, but it can help you formulate questions.”

And above all, shift the perspective. 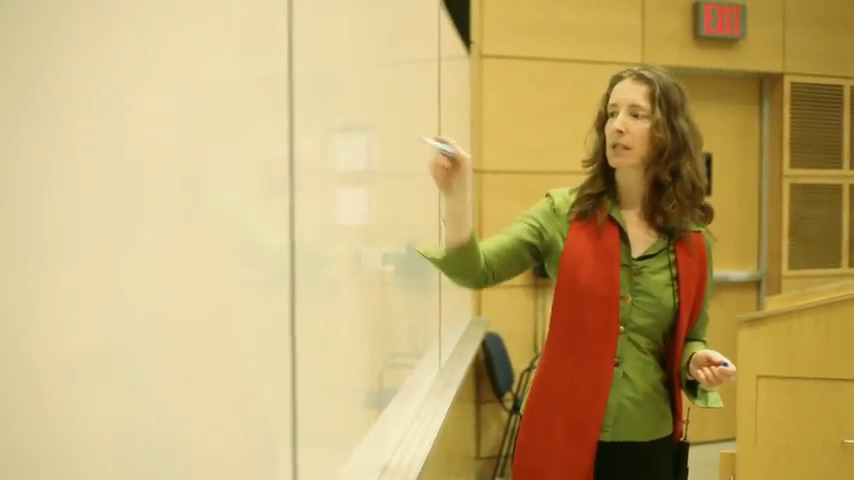