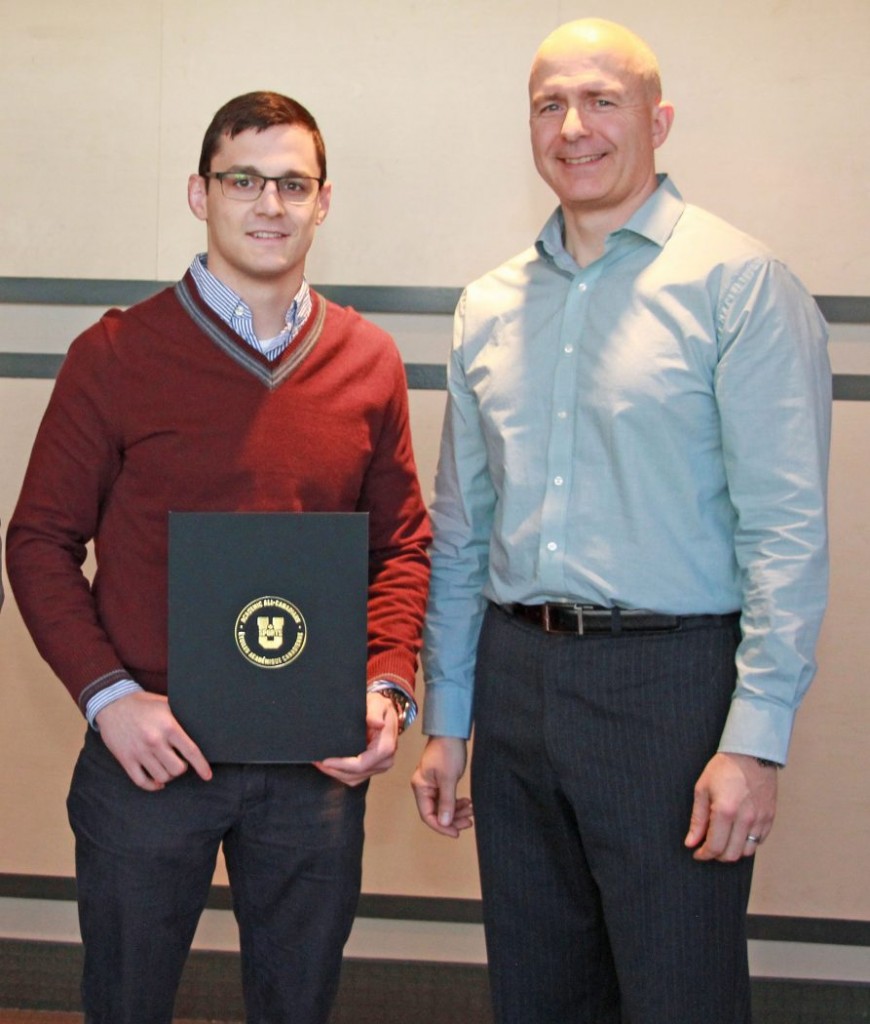 Matt Jagas, pictured here receiving an Academic All-Canadian Award from presenter Brian Roy, will graduate with a degree in history on Friday, June 8.

If Matt Jagas had a motto, it might be “Surgite!”

Despite a bumpy start to his university career, the student-athlete persisted and found his niche at Brock University.

On Friday morning, the multi-time Ontario and national university wrestling champion will graduate with a degree in History during the Spring Convocation ceremony for both the Faculties of Humanities and Math and Science. He is one of 110 Brock Badgers student-athletes in nearly 40 programs who are graduating this week

Jagas started his university career studying kinesiology while wrestling at Western University, but he struggled in the program and decided to head elsewhere after one of his primary coaches left the school during his second year.

Jagas’ brother Sam was already on a wrestling scholarship at Brock, and after talking to Badgers head coach Marty Calder, Jagas decided to apply.

“I always enjoyed writing and was relatively good at it, so I decided to pursue History at Brock,” he said. “Looking back, it was one of the best decisions I’ve made.”

Studying both History and Classics, including Latin, has allowed Jagas to explore many ideas through writing.

He became involved with The General, Brock’s open access undergraduate history journal and, after publishing a paper for the 2017 volume, he went on to co-edit the 2018 volume with fellow history student Grace Viana.

“I thought it would be a great opportunity in my final year to do something new and get to understand the world of publishing a little better, as publishing had never really crossed my mind before as a career option for a History student,” said Jagas.

“Matt tackled the work with professionalism and skill,” said Assistant Professor Jessica Clark, who worked with Jagas and Viana on The General. “He approached the task of selecting papers with care and respect, acknowledging all of the hard work that went into each and every paper.”

His successes on the wrestling mat have been no less significant, winning medals provincially, nationally and internationally.

In 2014, Jagas won bronze at the Junior Pan American championships in Santiago, Chile. He went on to win gold at the Ontario University Athletics championships in 2016, and has medaled twice at the U SPORTS National Championships, winning gold in 2017 and silver in 2018.

Jagas’ success in both academics and athletics was recognized this spring when he was one of nearly 70 Brock students to be named to the 2016-2017 Academic All-Canadians list for finishing with an average of 80 per cent or higher.

“It has been an absolute pleasure for our coaching staff to have had the opportunity to coach Matt,” said wrestling coach Marty Calder. “He’s a hard-working, skillful, disciplined young man who contributed greatly to our program.”

“Since the wrestling team at Brock is the best in the country, practices can be very hard and sometimes seem very unrewarding,” he said. “It forced me to really think about my goals and what I wanted to actually accomplish there. In the same way I did that for wrestling, I set academic goals and just worked hard to achieve them.”