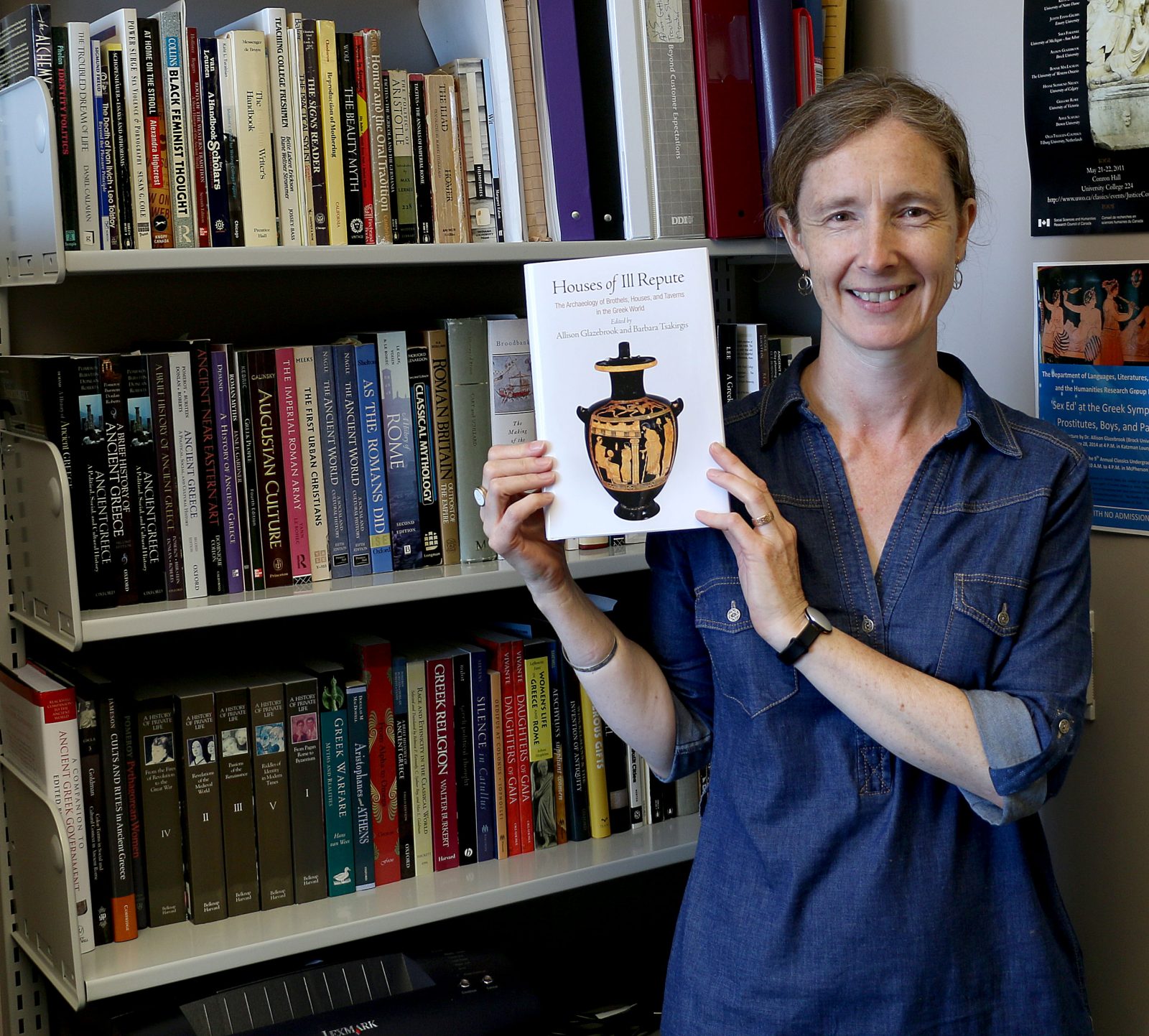 Classics Professor Allison Glazebrook holds a copy of her new book Houses of Ill Repute: The Archaeology of Brothels, Houses, and Taverns in the Greek World.

Many studies of the ancient Greek city-state haven’t included a key feature of the urban landscape — brothels.

After discussing the issue with colleagues, she began to examine the minute differences in archaeological digs to differentiate between conventional homes and other semi-private dwellings, including taverns, inns and brothels. This examination snowballed into a book about the subject, which she coedited with Barbara Tsakirgis of Vanderbilt Univeristy, called Houses of Ill Repute: The Archaeology of Brothels, Houses, and Taverns in the Greek World.

Glazebrook, a historian, was drawn to the study of brothels in ancient Greece through her exploration of women, gender and sexuality in the ancient world.

“There was more diversity within the sex trade than had been previously explored,” she says.  “To discover this, I needed to examine the brothels.”

She collaborated with archaeologists who wrote articles for the volume and helped her see ancient brothels from a new perspective.

“I raised questions and they were able to approach the data in a very different way than I could,” she says. “I was interested in the bigger picture and they were talking about first-hand experience.”

Glazebrook stressed the importance of identifying semi-private spaces and differentiating them from conventional homes.

“We know they are there and we need to be looking for them,” she says. “We need to be open to how we are interpreting the data. It points to a varied landscape.”

“Most people think of the theatre or temples. Maybe now they will think of the other spaces,” says Glazebrook. “Citizen life was complex, individuals sought out modes of entertainment such as playing games and going to bars and brothels.”

The idea of being an entertainment venue highlights the differences between modern brothels and those of ancient Greece.

“The ancient brothels look like they may have been social spaces that also involved prostitution. It was not strictly a sexual encounter,” she says.

A lack of formal zoning regulation or prohibition meant a brothel could be located in almost any residential area; however, due to a desire for pedestrian traffic they were most often located in high-volume places such as the ports or gates of the city.

As with location, Glazebrook says the social class of the prostitutes themselves also varied. This ranged from slaves who were bound to the sex trade to high-class courtesans who were more independent she says. Beyond the business of being a prostitute, the establishment of a brothel also enabled ancient women to manage the establishments.

“It’s surprising to see how often women are mentioned working in these roles,” says Glazebrook.

Houses of Ill Repute may be purchased at Amazon.ca  or through Penn Press.