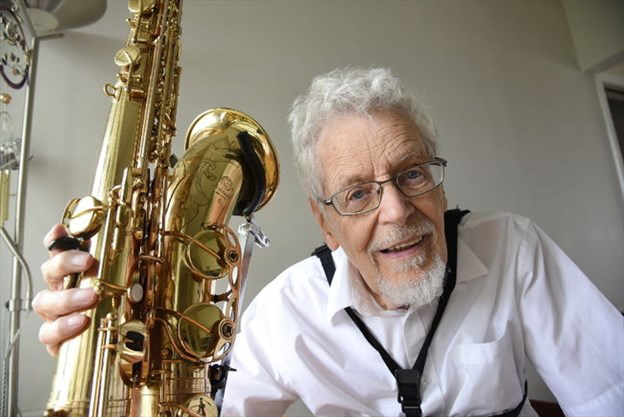 A new community jazz ensemble and concert series is being established at Brock University in honour of the late musician Hugh Logan and his wife, Marie. Photo courtesy of the St. Catharines Standard.

Affectionately known as ‘Hughie,’ the Toronto-born musician was a prominent part of the local music community for decades — known as much for his upbeat demeanour and quirky antics as he was for being a valued and dedicated member of a number of bands.

Logan died in 2016, but his legacy will live on for years thanks to a generous gift to Brock University’s Department of Music. 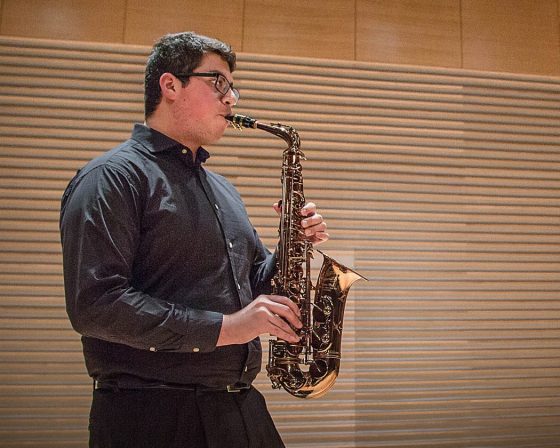 Brock students and members of the community are invited to audition for the Department of Music’s new jazz ensemble, which is funded by a generous gift from the Bassett family in honour of late musicians Hugh and Marie Logan. Pictured is Brock Music student Aaron Cardona.

Logan’s sister, Norma Bassett, has created a fund that will support a new student and community jazz ensemble, an accompanying instrumental jazz techniques course and the Hugh and Marie Logan Jazz Series. The gift is Bassett’s way of honouring her late brother and sister-in-law, who were loved for their musical accomplishments and larger-than-life personalities.

The ensemble and three-concert series will launch in the fall out of Brock University’s Marilyn I. Walker School of Fine and Performing Arts (MIWSFPA).

Brock Department of Music Chair Matthew Royal said he is “extremely grateful” for the generous contribution.

“This is a fitting way to memorialize Hugh and his wife Marie and we are delighted to be able to offer this programming for our students and musicians in the broader community,” he said.

Logan’s love of music was evident to those in the Niagara community who knew him — as was his wife Marie’s never-wavering support of that passion.

“Music was integral to Hugh’s being,” Bassett said simply. “It really was his life, and Marie was very supportive.”

Encouraged by his father’s musical talents, Logan began playing the flute and clarinet in his early teens in the Toronto neighbourhood where we grew up.

Among his early musical accomplishments was earning a place in the Queen’s Own Rifles of Canada, which he played in at the age of 15.

A few years later, his father passed away from cancer, leaving Logan on his own to support his mother and sisters.

The love of music instilled in him by his father stayed near to Logan’s heart, however.

Bassett laughs when she recalls a time that Logan was reprimanded at work because he couldn’t stop dancing and singing along to a jazz number while working on a factory line.

Logan later moved to Niagara, where he played with a number of bands across the region until his death at 90 years old. He played alto sax in the Niagara Falls Concert Band, flute in the Thorold Reed Band, flute and lead tenor sax with the Ambassadors Swing Band and baritone sax in the American-based Dick Griffo’s Jazz Workshop.

He would occasionally sub in with the Jimmy Marando Swing Band, too, and Bassett said her brother was known to always carry his instruments with him, so he would be prepared if an opportunity to play presented itself. It wasn’t unusual for someone to need a fill-in and phone Logan up to come jam.

“We wanted to do something to honour that passion for music,” added Bassett, “and giving back to students at Brock and other musicians in Niagara was the right choice.”

Pamela Shanks, Executive Director, Development and Alumni Relations at Brock, said the gift serves to strengthen ties between the University and the community.

“We thank Norma for her generous gift to the University,” said Shanks. “It will create new programming for our students and the Niagara music community, and for that we are grateful.”

Royal added that although the Department has traditionally focused on classical music, the jazz ensemble provides an opportunity to bring students and the community together to learn a popular musical style.

“Having students play alongside experienced musicians is a great way for them to learn jazz because they benefit from that cross-generational interaction,” he said. “The jazz series will also afford an opportunity for jazz lovers in the region to perform together and develop new creative collaborations.”

The jazz ensemble will add to Brock’s existing roster of string and wind ensembles and will be open to Music and non-music majors, as well as members of the broader community. Anyone interested in auditioning should contact Royal at mroyal@brocku.ca for more details.