Advocate for those with disabilities earns accessibility and inclusion award 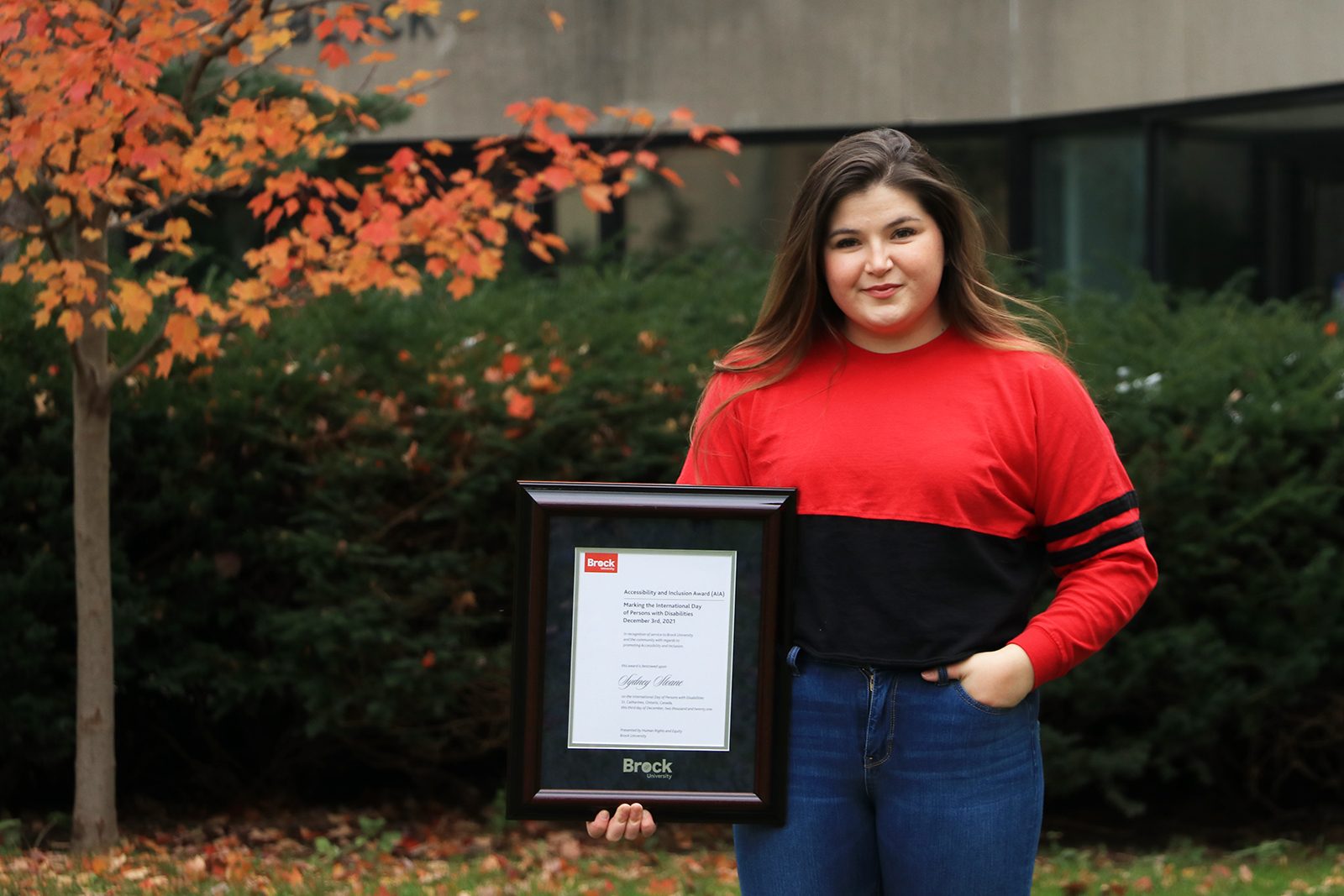 Sydney Sloane says she isn’t what most people think of as a person with a disability.

The fourth-year Brock University Physical Education student was diagnosed with post-concussion syndrome (PCS) after sustaining a seventh concussion in 2019.

Living with PCS means she continues to experience concussion symptoms, such as migraines, light and noise sensitivity, fatigue, dizziness and problems with concentration and memory.

“I’m not what most people think of as disabled,” said Sloane. “I’m feisty, spunky, loud and opinionated. I do well in school, I hold multiple jobs and I’m involved in several student leadership roles. A lot of people — especially in academia where disability is viewed as less-than and where invisible disabilities are often overlooked — forget that disability doesn’t mean inability.”

Since sustaining her most recent concussion, Sloane has found herself down a path of advocacy for people with disabilities — and it’s what has led to her receiving Brock University’s 2021 Accessibility and Inclusion Recognition Award on Friday, Dec. 3 during an online event celebrating International Day of Persons with Disabilities co-hosted by the Brock-Niagara Centre of Excellence in Inclusive and Adaptive Physical Activity, and Brock’s Anti-Ableism and Mental Health Committee (AAMH), which is a working group of the President’s Advisory Committee on Human Rights, Equity and Decolonization, and the Office of Human Rights and Equity. 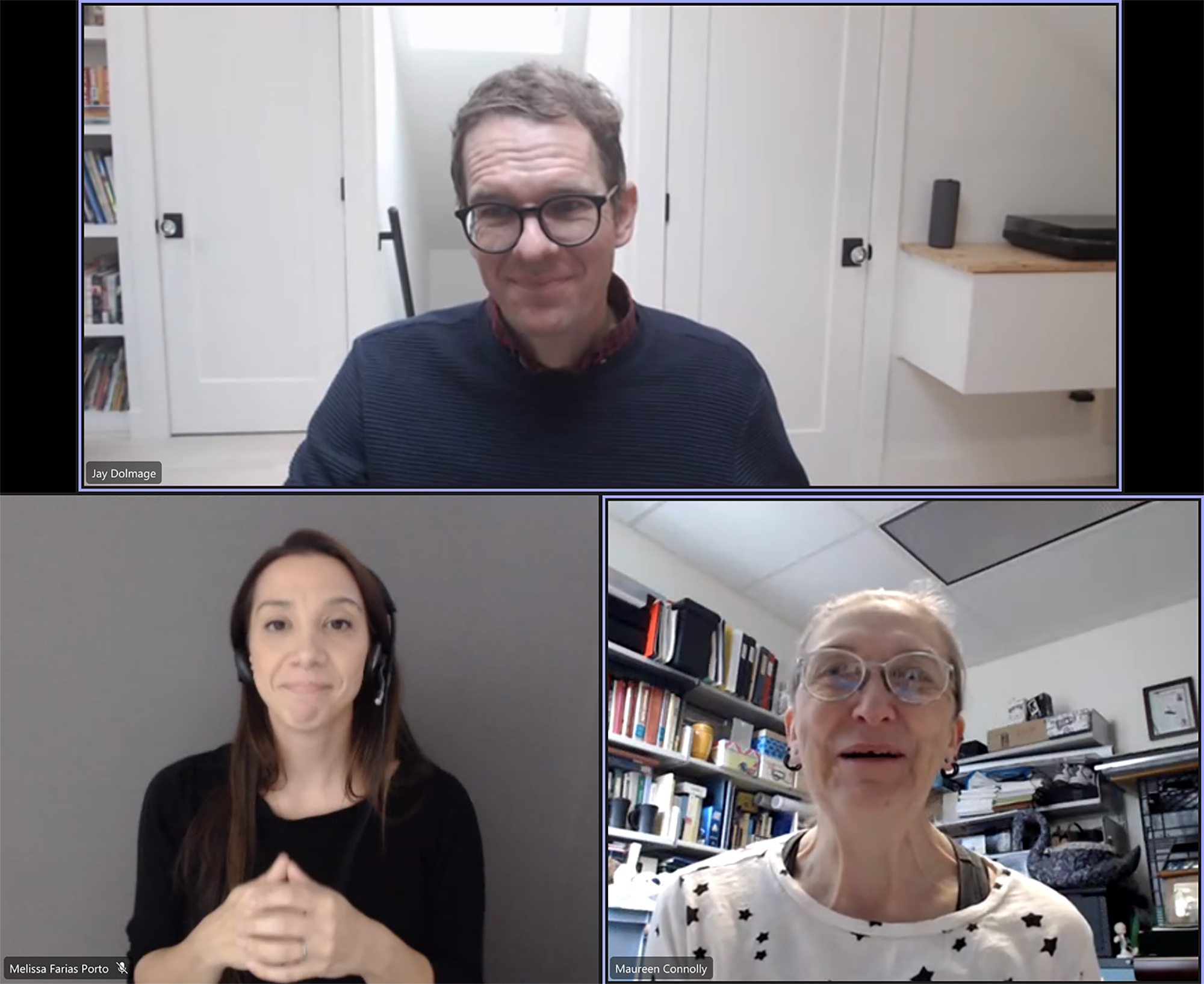 During a two-month break from school and work to recover from her concussion, Sloane spent a lot of time researching her condition and learning how to advocate for herself. She volunteered as a participant in a Brock-led research study on concussion and PCS; read medical literature and about others’ experiences; followed doctors and concussion experts on social media; and listened to podcasts focused on developing concussion research.

In learning how to support herself in her own recovery, Sloane began to advocate for others. She joined the HeadsUp Concussion Advocacy Network, a local organization founded by two Brock Sport Management alumni that connects people who have experienced concussions and PCS.

“If I can loudly advocate for my community based on privileges that allow me to access a lot of these spaces, then that’s what I want to do,” she said.

Sloane also made significant changes in the student clubs she is involved with. As an executive member of Brock Model United Nations, she led the club to focus more on social justice — advocating for a code of conduct and a discrimination clause in the club’s constitution and initiating an amendment that now requires all executives to take human rights and equity training before they begin their term. Thanks to her leadership, the club also ensures all information they share is in an accessible format, such as plain text or PDF, so visually impaired people can use screen readers. Images are posted with alternative text and image descriptions, videos include captioning, and auto captions are enabled during the club’s team virtual meetings.

In her work as an Advocacy Co-ordinator with the Brock University Students’ Union (BUSU), Sloane is part of a team that is mandated to carry out BUSU’s student-, university- and government-facing advocacy. This includes lobbying the provincial government to improve financial aid for disabled students and ensuring an equitable and accessible return to campus. She is also consulting with BUSU’s marketing team to ensure digital content is accessible.

Sloane was honoured to receive the Accessibility and Inclusion Recognition Award, which recognizes advocates within the disabled community and their allies for their work in helping to reduce barriers.

She said while the award is a great first step to initiating conversations about ableism, there is a lot of work to be done, for example, in educating others on how varied disability can look and the importance of accommodations. She has personally experienced classmates telling her she received a high mark only because of her accommodations.

“I tell them that’s not how it works — that the accommodations I receive are allowing me to access my full potential,” she said. “I explain that they don’t have the same barriers I have.”

Sloane feels that with continued advocacy and awareness, people’s perceptions of productivity and ability will eventually shift.

“Ideally, down the road, we won’t need this award anymore because accessibility and inclusivity will be so mainstream and innate, we’ll be taking a universal design approach to education and work,” she said.

Universal design was talked about in more detail during the International Day of Persons with Disabilities event. In a talk about Academic Ableism, Jay Dolmage, Associate Chair, Undergraduate Communication Outcome Initiative, and English Professor at the University of Waterloo, said if a design works well for people with disabilities, it works better for everyone.

“Imagine if we conceptualized all structures, even huge institutions like universities, for the broadest possible spectrum of users instead of for one particular idea about what thinking is and what the body looks like,” he said.

He explained that many of the technologies that now improve everyone’s quality of life, such as GPS, email, voice-to-text and optical character recognition, were originally designed for people with disabilities.

“There’s so much in the educational sphere, where we made it accessible to everybody, we’d understand that we can change the culture (of accessibility and inclusivity),” he said.

The International Day of Persons with Disabilities event also recognized Brock student submissions to the Innovative Designs for Accessibility competition. Master of Recreation and Leisures Studies graduate Talia Ritondo (MA ’21) shared information about SHELS, a Sexual Health, Education, Love and Support mobile app that would provide disabled populations sexual violence support, sexual health education and self-love practices in one place. Bachelor of Kinesiology graduate Michael Zutautas (BKin ’21) discussed Brock’s Side by Side program, which is comprised of a team of Brock students who plan and implement adaptive physical activity programs for a group of adults who identify as having a disability or neurodiversity.

A video recording of Brock’s International Day of Persons with Disabilities event will be added to this article once it is available.

To learn more about accessibility and inclusion at Brock, visit the Human Rights and Equity website. Questions can be directed to accessibility@brocku.ca or 905-688-5550 x4859.