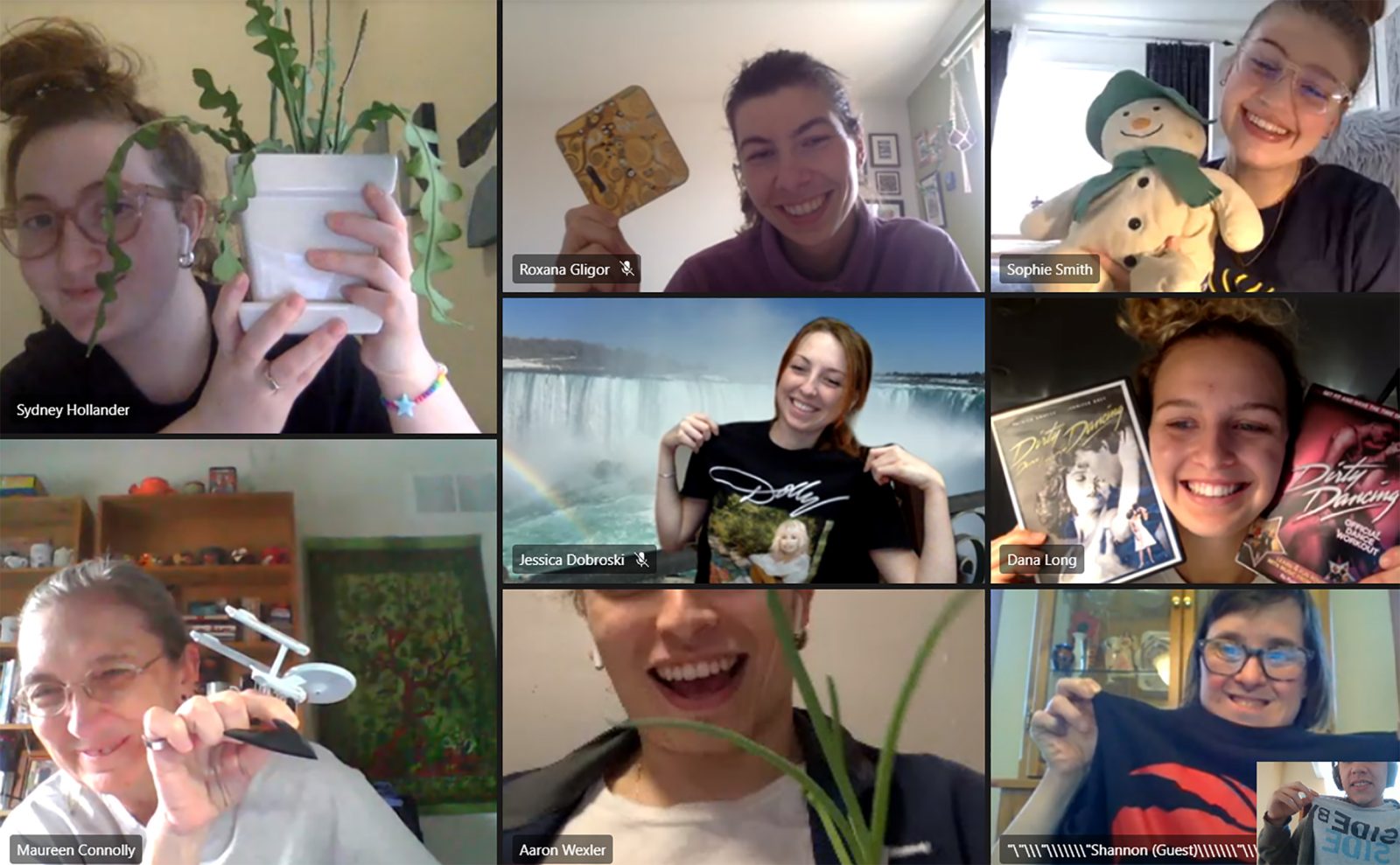 Impressing with creativity and ingenuity, two Brock University teams have won top honours in the Universities Canada Innovative Designs for Accessibility (IDeA) student competition for developing innovative, practical and cost-effective solutions to address barriers and challenges for people with disabilities.

Students made submissions in one of four streams: attitudinal/systemic barriers; architectural/industrial design barriers; technological/communication barriers; and new for the 2020-21 competition, a virtual learning and distance education stream.

Winning first place in the virtual learning and distance education stream was a group of eight current and former Brock University Applied Health Sciences students who are involved in Brock Kinesiology’s Side by Side program, which operates in partnership with Community Living Niagara.

Under the mentorship of Kinesiology Professor Maureen Connolly, Side by Side is comprised of Brock students who plan and implement adaptive physical activity programs for a group of adults who identify as having a disability or neurodiversity.

When the COVID-19 pandemic forced weekly in-person sessions to cease in March 2020, the student volunteers were concerned participants may be at risk of suffering from social isolation.

“Side by Side student volunteers and leadership are all good friends,” says Michael Zutautas (BKin ’21), who became the team captain for the IDeA submission.

Side by Side leadership recognized too much time had passed since they saw participants and wanted to reconnect with them to see how they were coping.

“To prevent negative consequences of social isolation, we began to facilitate virtual sessions with participants to help provide a way for them to engage,” says Kinesiology graduate Aaron Wexler (BKin ’21). “As participation increased, those involved realized with appropriate safety precautions, one-to-one and group exercises could resume in an online capacity.”

By September 2020, Zutautas alongside Aqui Laidlaw-Allen (BKin ’21), enrolled in the fourth-year experiential education course KINE 4P99 with Connolly. They led the creation of adaptive exercise programming online to help maintain and improve the various mobility needs of Side by Side participants and serve as an opportunity to mentor new volunteers into the program.

“Our goal was to get everyone active again and build participant skills to hopefully improve daily activities they could take part in at home,” says Zutautas. “We identified household items that could be used as home-made exercise equipment like rolled up towels and cans for weights.”

With positive feedback from participants about the online program’s effectiveness at overcoming some barriers this population faces, such as cost of and access to transportation, the team began to think about ways to expand.

“IDeA gave us the platform and motivation to bring together a good team with a lot of experience working together in courses, at Side by Side and in other Brock volunteer programs to communicate more broadly about the work we are doing,” says Zutautas.

As first-place winners, the team received $5,000, but collectively decided to donate more than $4,000 back to the development of the online and in-person development of Side by Side.

“From the beginning, we thought any prize money would automatically go back to the program,” says Wexler. “We were very surprised to learn it was going to be split between us. With such a large amount, we all agreed the majority would be of better use if we contributed it to the program we all love.”

In addition to that group, a team of four current and former students, all of whom are involved with Human Rights and Equity (HRE) at Brock, received second place and a $1,500 prize in IDeA’s Attitudinal/Systemic Barriers category.

Ritondo said the first-of-its-kind app idea would be helpful to an underserved group.

The proposed app aims to curb this trend by providing sexual violence support, sexual health education and self-care practices all in one place.

“These tools allow people to empower themselves through education and resources to help end sexual violence occurring within the community,” says Ritondo.

But Ritondo says those supports can look different depending on the audience.

“A person with an intellectual disability will access different information than someone with a physical disability,” she says. “We also have to differentiate for people with born or acquired disabilities. It’s critical that we have resources for all of these people.”

With such a large amount of information to effectively communicate, Ritondo and team members fourth-year Popular Culture and Communication student Mackenzie Rockbrune, Biological Sciences PhD candidate Hannah Charnock, and third-year Health Sciences student Hamed Karagahi are meeting to figure out their next steps.

“We are hoping someone who is interested in it can help develop the app,” says Ritondo. “We know very similar app layouts to this one exist on the market, but there is a definite need for this app to become a reality.”

While the app is a first step, the team also believes that effective communication and support will need to go beyond people’s phone screens.

The idea behind our submission was always more than creating an app,” says Ritondo. “The app was the first step in our major plan, as not everyone can access it. The second phase would be to create a website and then to create an organization that connects with people directly by going to schools.”

For more information about the IDeA competition, the SHELS app, how Side by Side is building community online or to view all the winning ideas visit the Universities Canada website.

Those interested in learning more about how to participate in or volunteer for Brock’s Side by Side program can email sidebysideniagara@gmail.com