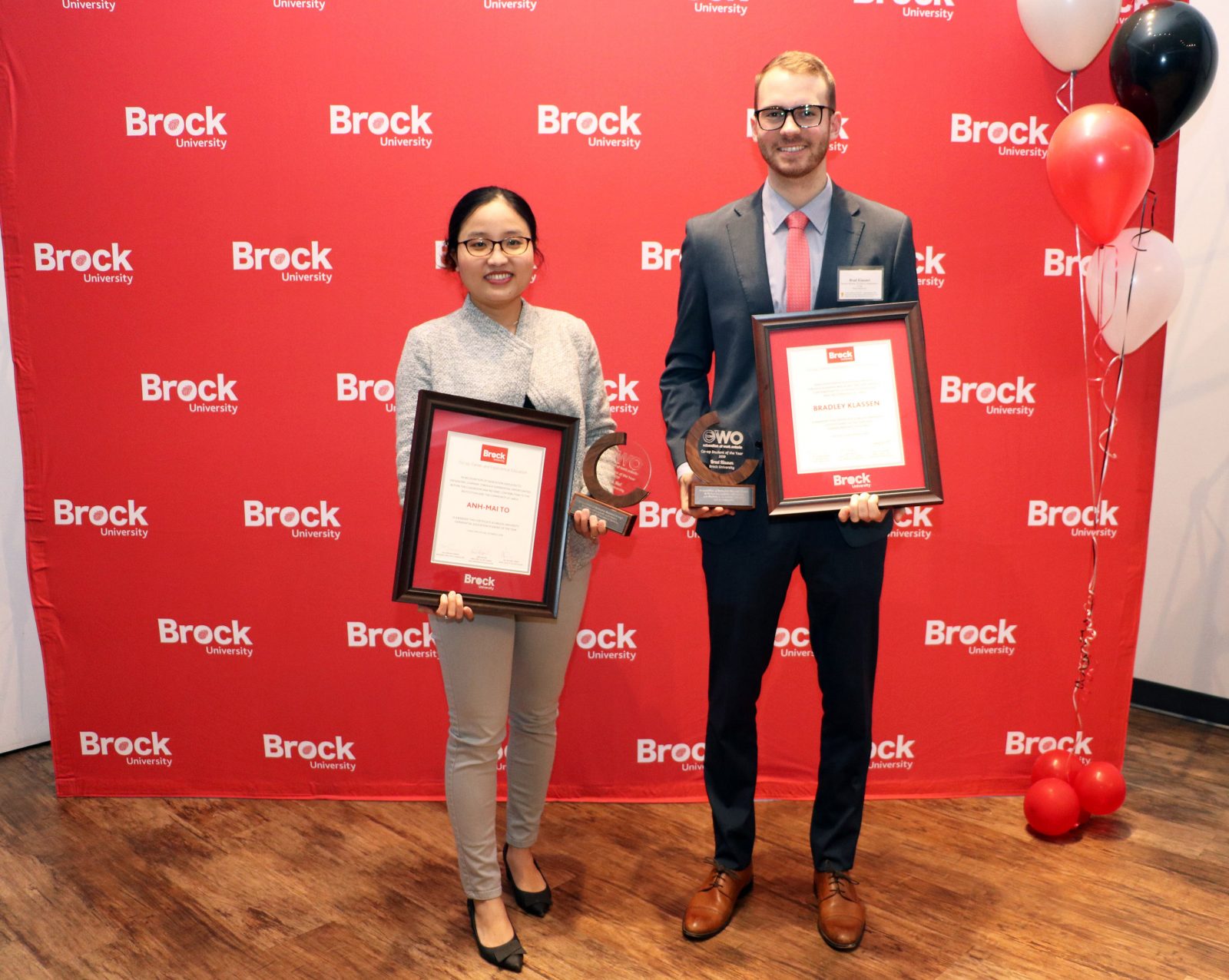 With another year of collaborative learning efforts set to wrap up, the Brock University community gathered to celebrate numerous jobs well done.

As part of Brock’s Co-op and Work-Integrated Learning Month activities, the celebration encouraged guests to network with each other and participate in interactive exhibits before inviting them to take part in an awards celebration that highlighted the outstanding efforts of CCEE students and their employer and community partners.

With a 698 per cent increase in employer engagement on campus in the last five years and more than 43,000 experiential learning opportunities completed by students in 2019, there was no shortage of worthy candidates for the many honours being presented.

Among the selected students taking home awards was Co-op Student of the Year Brad Klassen, who said the accolade was something he could not have achieved alone.

“I am extremely humbled and thankful to be recognized,” said the Mathematics and Statistics student. “It’s an honour to represent the co-op team as they have contributed so heavily to my success in the workplace and have helped me find the industry I would like to work in after graduation.”

Like Klassen, To said the success she had achieved working on a social media project for Brock’s Faculty of Education was thanks to the guidance and support offered by those she was working with.

“The part I enjoyed most was working with a supervisor every week to discuss our plan and receive feedback,” she said. “By talking to her and working with her on the project, I gained valuable insights from an industry professional in the educational sector.”

As more awards were presented to employer partners, alumni employers and to celebrate the 20th anniversary of the Med Plus program, CCEE Director Cara Krezek reflected on the steady growth in collaborative learning at the University and within the community.

“Five years ago, we set out to become leaders in co-op, career and experiential education in Canada,” she said. “It’s not because we enjoy success in one type of experiential learning or that we do career conversations well; it’s because we are passionate about our why. Helping others along their journey is why we dedicate our talents and passions to the work we do, which allows us to see the successes of our students, hear the stories of how they have developed and celebrate with them as they move along in their careers.”

As Klassen packed up his awards and prepared to return to his master’s studies in Statistics, he reflected that his journey was one of the successes Krezek mentioned.

“Through the guidance of the CCEE team, I have gone from no professional experience to working at top companies in the industry,” he said.

To see a list of all award winners from the event or to learn more about Co-op, Career and Experiential Education at Brock, visit the CCEE website.