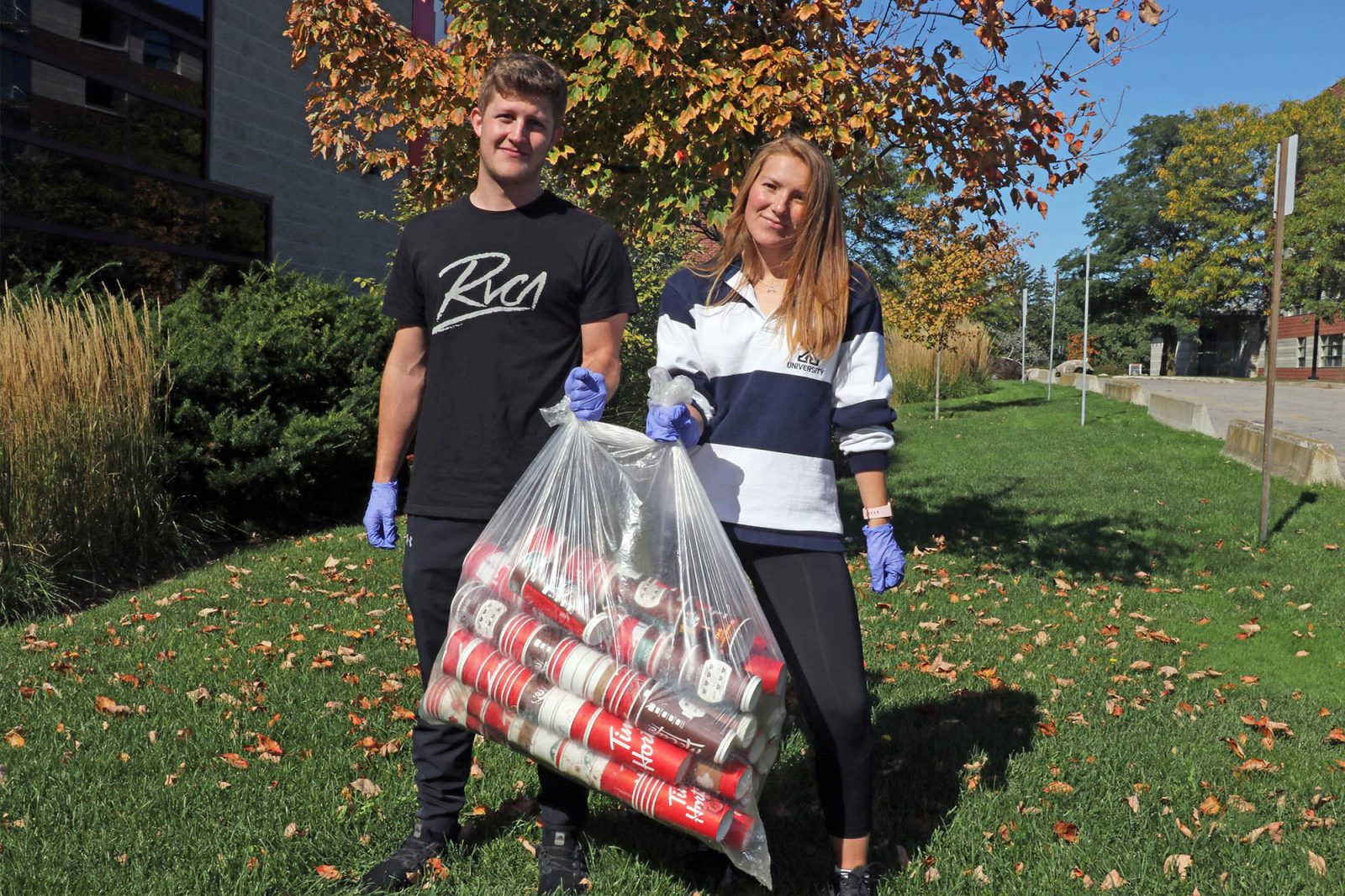 On a typical weekday at Brock University, thousands of students, staff and faculty make sure there’s no shortage of coffee consumption.

But do you ever wonder what happens to your coffee cup, and the thousands of others, after you’re done with it?

Just 2.1 per cent of them are properly recycled at Brock University on an annual basis, which means the remaining 97.9 per cent (totalling 41.8 metric tons) end up in a landfill.

Brock’s annual waste audit took place over a two-week period in October, which included a physical analysis of solid non-hazardous waste generated at the University. The audit examined representative samples of waste (trash and recyclables) from the entire campus, including satellite sites.

The overall purpose of the audit is to identify, quantify and analyze the composition of the waste stream to ensure compliance with the requirements outlined by the Ministry of Environment, Conservation and Parks (MECP) under Ontario Regulations 102/94 and 103/94.

Some other benefits to the audit include pinpointing new recycling opportunities, improving initiatives already implemented at Brock and finding potential cost savings associated with the disposal of solid waste materials.

Jay Ismailovic, Manager of Custodial Services, says the University has used the waste audit as an opportunity to make improvements over the years.

“We want to engage the Brock community so we can improve the environment we live, work and study in,” said Ismailovic. “I look forward to this every year because it’s like a report card. We always want to do better.”

Brock’s Sustainability website includes waste audits and reduction plans as far back as 2010.

For Master of Sustainability students Erica Harper and Nolan Kelly, the audit is personal.

The two are working as research assistants with Brock’s Environmental Sustainability Research Centre and have a passion for sustainability that goes beyond their academics.

Harper said that while people seem to be well-versed with the last of the three R’s — recycle — she encourages practicing the first two — reduce and reuse.

“I got really interested in the zero-waste movement,” said Harper. “I thought it would be difficult, but it’s a small lifestyle change you can make that has a big impact. It really can be as small as using a reusable mug.”

Director of Dining Services Malcom Dales says all dining locations on campus — including the new Tim Hortons and Starbucks — that sell coffee or tea have a 10 cent discount for those who bring in a reusable drink container.

For those living in residence, dining halls have a punch card each time a student uses their reusable mug. In addition to the discount for every eight drinks they purchase with a reusable container, the ninth is free, which is extended to fountain pop, infused water and hot beverages like coffee and tea.

“We are currently working with Pepsi to roll out their fully biodegradable, non-lined drink cups, which are intended for the Guernsey Market as they can be pulped in the pulper,” said Dales. “We will also use them across campus in lieu of wax lined cups.”

He adds that when the new Starbucks is completed, the coffee offered in Guernsey Market will switch to Planet Bean coffee – and with that, a fully biodegradable paper cup that can be easily processed.

At General Brock, customers who bring a reusable cup of any size pay just $1.25, making it the cheapest coffee on campus while also encouraging sustainability.

Kelly hopes to see more people adapting to the use of reusable cups.

“It’s such an easy change to make,” he said. “We have to address the issue in order to fix it. A lot of people unfortunately just don’t know better.”