A Brock alum, 40 years in the making 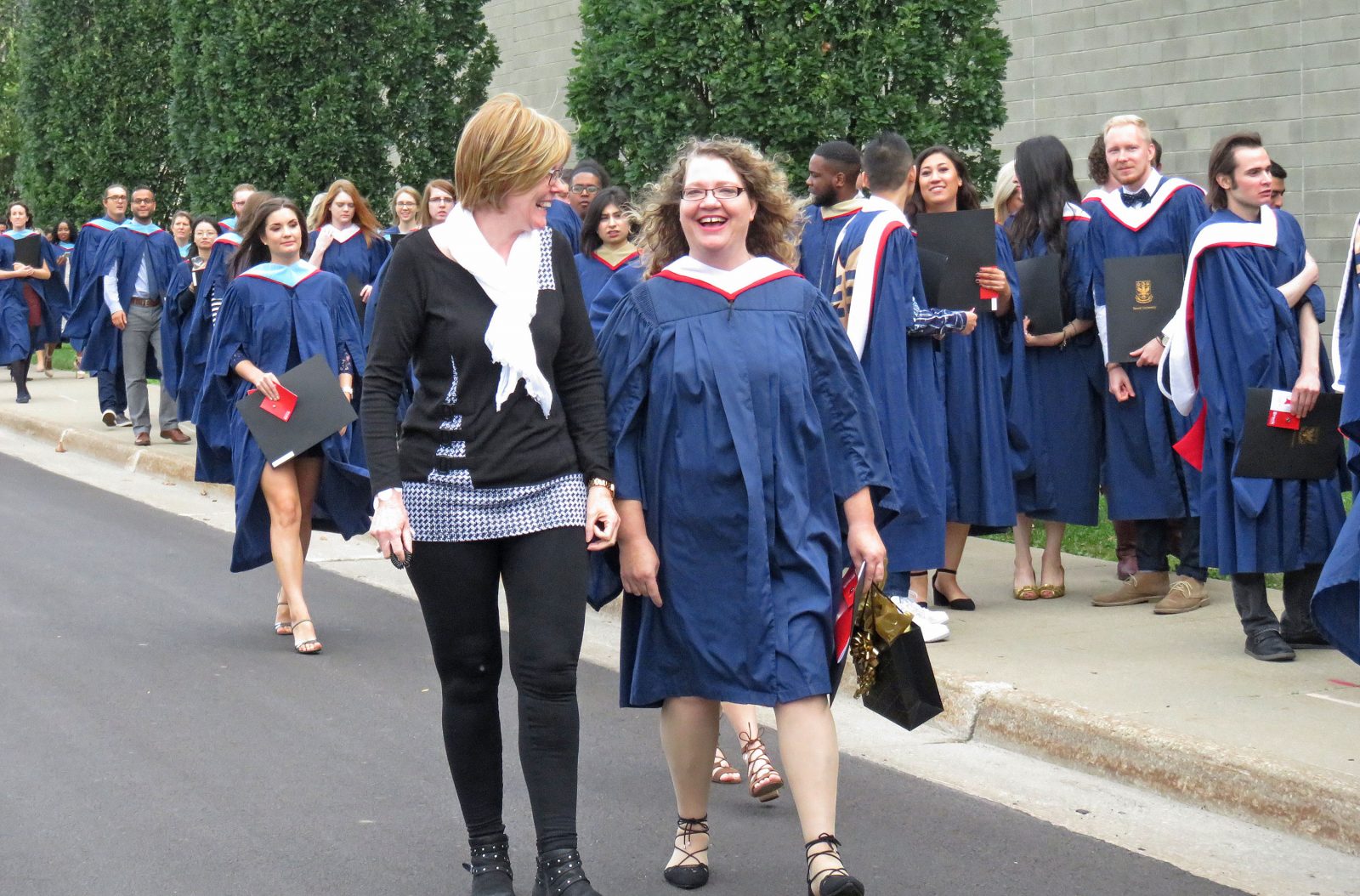 Almost 40 years to the day she left home to start her degree, 59-year-old Donna Phelps, right, crossed the stage at last Friday’s Convocation ceremony and graduated with a degree from Brock’s Interactive Arts and Science program. Phelps is pictured with Brock Budget Officer Sheila Smith.

When Donna Phelps left her hometown of Columbus, Ohio, in 1977 to start a four-year program in California, she never imagined it would be almost 40 years to the day before she graduated.

The administrative assistant for Brock’s Department of Computer Science dreamed of becoming a photojournalist and set her sights on California after working for a year to finance her schooling. Not long after her freshman year, Phelps was forced to return to her hometown when her program was unexpectedly cut short and the school later closed. It was the first of many setbacks and challenges that Phelps would face while pursuing her degree.

Fast forward to Friday, Oct. 13 when Phelps walked across the stage at Brock’s Fall Convocation, an experience she describes as “very emotional and overwhelming.” 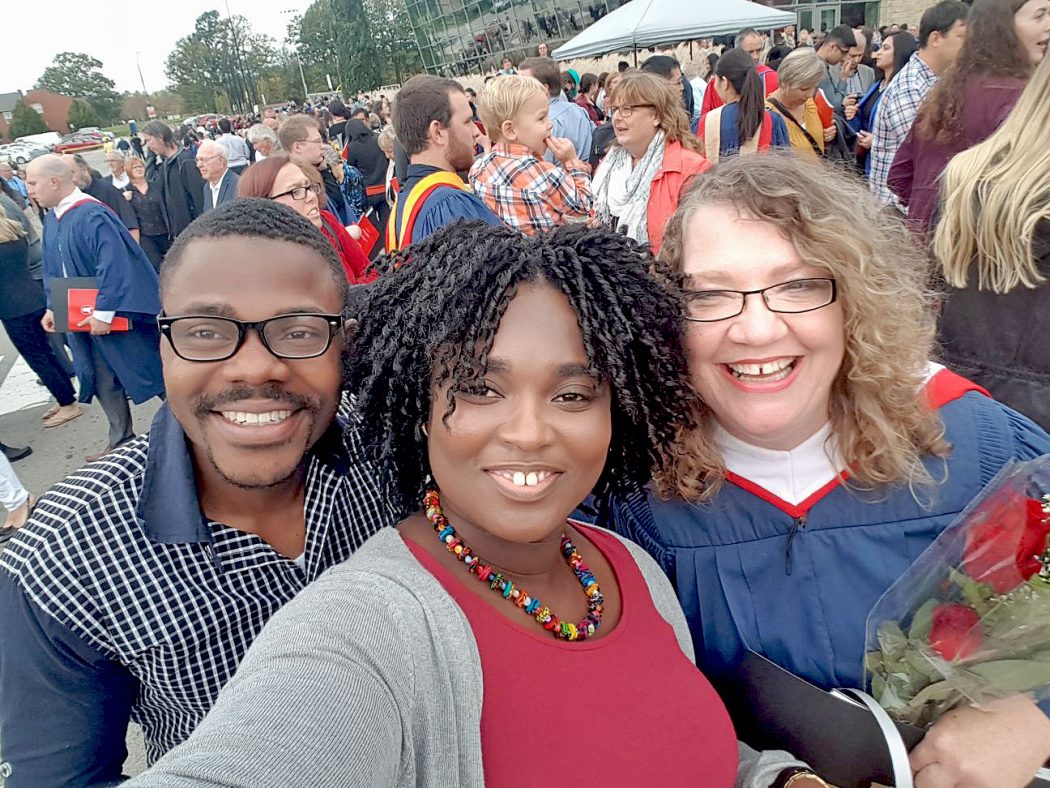 “When they said, ‘you’re all alumni now’ – that moment hit me the hardest,” Phelps said. “I arrived. A weight was lifted off my shoulders. It was quite a journey to get there and it was pretty special.”

Phelps’ path to becoming a Brock alum has not been easy. Despite all odds, her achievement is the result of unwavering dedication and determination.

Upon returning home from her time in California, she enrolled in part-time studies at Ohio State University, working two jobs to support herself. In 1981, she got married and moved to the Niagara region. A mother of four, Phelps put her own studies on hold to stay home with her children until 1996 when she enrolled in a Computer Skills Lifetime Learning course.

There she proved herself to be a dedicated student, learning programs like Word 5.1 in three weeks from a book she purchased at the library. Her resolve, coupled with volunteer work, enabled her to re-enter the workforce.

In 1999, Phelps was hired for a temporary position at Brock. The role not only marked the start of her career at the University, but also granted her another opportunity to continue her studies.

“I always wanted to go back to school,” Phelps said. “I never gave up the dream. It was always a dream of mine. Always a goal.”

Phelps enrolled in Brock’s Interactive Arts and Science program, perfectly suited for someone with a creative side and a love of computers, dating back to her brother’s Commodore 64. The experience has taken her full circle, blending elements of her past mass communications classes with gaming and game theory.

A few years into her degree, Phelps’ long-time marriage ended. This triggered memories of previous traumatic situations and her personal life and mental health suffered as a result. She was diagnosed with complex post-traumatic stress disorder, and as flashbacks and self-harm surfaced, it was made clear that she needed to take a break from schooling and other aspects of her life to “honour the battle of mental health,” she said. Once again, Phelps put her degree on hold, determined to come back stronger, both mentally and emotionally.

“For me personally, knowing how close I came to ending my own life during those very disparaging moments, I can say that, somehow you get through the dark, dark period and finally you’re no longer surviving, you’re living again. Everyone has stuff they have to work through. I worked through what I had to work through,” she said. “You don’t do it alone. There are a lot of people who encouraged and supported me. I survived surviving and was able to accomplish all of this. Keep moving and don’t give up no matter what. You will arrive and be glad you did.”

When she returned, she resumed her studies and joined Brock’s Sexual Violence Prevention Committee, finding ways to help others who may also be struggling. She is a passionate advocate for fostering a safe space for survivors on campus and her experiences have played a significant role in shaping her future plans and long-term goals.

After graduating with a three-year pass degree, Phelps now wants to take fourth-year courses to get her honours degree before moving onto a master’s, followed by a PhD. The pursuit of higher education brings Phelps one step closer to her ultimate goal of advocacy and motivational speaking.

Her dream of becoming a photojournalist has grown to include Photovoice, an interactive digital storytelling project through which individuals “take photos of things that speak to their struggle and it becomes their way of telling their own story,” she said.

Phelps understands first-hand how easily plans can change and offered the following life advice: “Don’t give up if it doesn’t happen when you think it will. It pays not to give up because you never know. Just don’t give up. It’s worth it. It’s really worth it.”

Information on Brock’s mental health resources and additional supports for students is available at brocku.ca/swac/ and brocku.ca/bu4u/