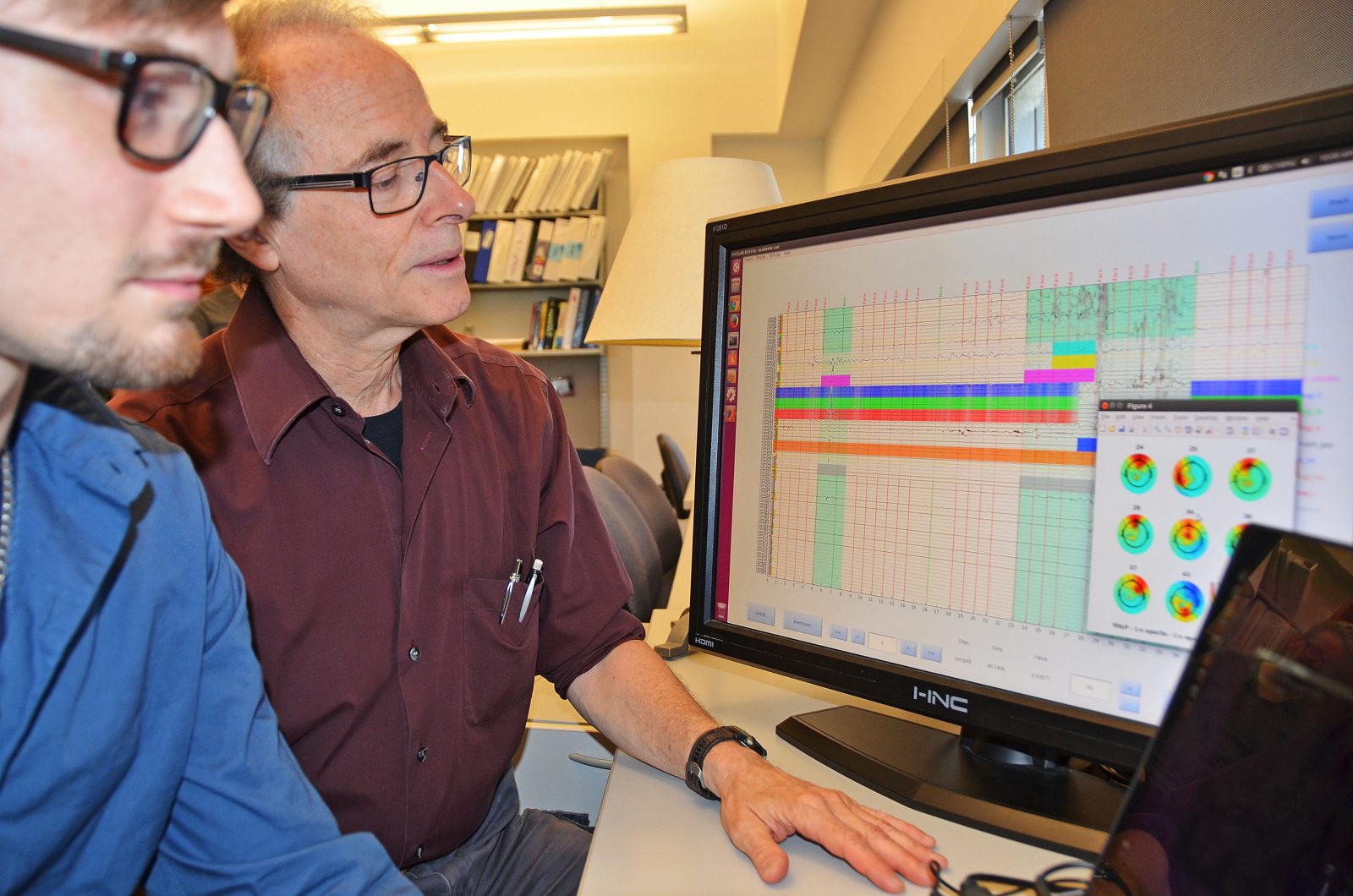 Mike Cichonski, a programmer and technician in the Cognitive and Affective Neuroscience Lab, look overs the brainwave data of infants alongside neuroscientist Sid Segalowitz, a professor in Brock’s Department of Psychology.

Neuroscientist Sid Segalowitz is on a mission to determine how early the development of autism can be detected in a child’s brain.

“Autism is one of those conditions where, if they can diagnose it early, then intervention can have a huge beneficial effect,” said Segalowitz, a professor in Brock’s Department of Psychology. “But we have got to get it early because the brain is developing quickly and we can influence the brain development pattern more the earlier we start.

“We have some sense of how the brain may be developing differently in children who have been diagnosed with autism, but does this manifest itself right after birth?”

To answer this question, an international research team based at McGill University has turned to Segalowitz and his Brock research team, who are widely recognized for their ability to record and interpret brain waves gathered by an electroencephalogram (EEG).

The cerebral cortex of the human brain is constantly active with electrical impulses that regulate everything from our thoughts to emotions to speech. These brainwave patterns are recorded on the EEG through sensors placed on the scalp. From these patterns are drawn the systematic responses of electrical activity, called the Event-Related Potential (ERP), which happen when someone views a picture, listens to a sound or experiences any other such stimulus.

Segalowitz and his colleagues have documented how specific neural patterns are related to a wide range of human behaviour, particularly risk-taking, anxiety and aggression in adolescents.

Researchers from McGill, Harvard University, the University of Washington Autism Centre and Birkbeck, University of London asked Segalowitz to clean up and help interpret EEG data gathered from hundreds of children, from newborns to toddlers a few years old. The international team deemed these babies to be at risk of autism mostly because their older siblings were identified as having the disorder.

Segalowitz accepted, and says the collaboration could open up new frontiers of awareness.

“Most of our knowledge about brainwave patterns as they relate to information and emotional processing come from adults and not from babies, so this is exploratory. The patterns in infants are not so straightforward.”

This is partly because there is a lot of “noise” in EEG brainwaves — patterns in the data coming from movements rather than thoughts. He said electrical signals in parts of the brain that control movement are large, and tend to override a baby’s thinking or emotional signals.

The work has its challenges. Babies sleep very well, but fuss a lot. It can also be challenging to get a six-month-old to focus on a screen to view pictures. Then it takes time to establish if certain brain patterns are over- or under-responsive “because we don’t know in advance which is the right level.”

Segalowitz and his team scrutinize EEG results for discernable patterns, and compare brainwaves of autism-vulnerable babies to those with no family history of autism. But he says many children with autism don’t have the same pattern of “cortical pruning” as other children. Typically, neurons, dendrites, synapse and other brain structures cause the cerebral cortex to “grow madly and very quickly.”  But then the brain “prunes” itself, reducing the structures not well used to make room for new development, resulting in the cortex getting thicker and then thinner.

“There’s evidence to suggest that in autistic children, the brains don’t get thinner. So now the question is, ‘what is going on?’ It may be that the fine-tuning is not there, which is part and parcel of this symptom of being very sensitive to sensory input.”

However, Segalowitz cautions against taking a ‘cause-and-effect’ view of autism, saying the condition is highly complicated, with many influencing factors.

Segalowitz and his colleagues are also applying this EEG expertise in other mental health-related projects, including a long-term study on adolescent brain growth and risk-taking behaviours, and on the brain growth and response patterns of young adults with cerebral palsy.