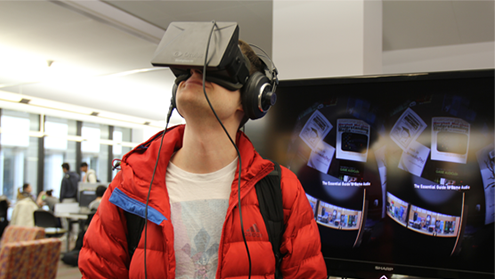 The Interactive Arts and Science program at Brock University continues to showcase its diverse curriculum and futuristic approach to learning.

Look no further than the James A. Gibson Library this week and next.

IASC students and staff have worked very closely with library staff to showcase what their program is all about.

The two main cases in the library now feature relevant books and artifacts from Interactive Arts and Science students.

“We have four areas of study that we’re focusing on,” said Jason Hawreliak, Assistant Professor of Game Studies.

Hawreliak was also quick to praise Mark Weiler for his contribution to the display.

“A big goal is to create a home feel for the Interactive Science program in the Library,” Weiler, Liaison Librarian said. “The library is really the centre of academic inquiry in the University, and we’re happy to be involved with a project like this.”

“This truly is a shared project between students, faculty and librarians,” added Andrew Roth,” Technical Associate Research and Learning Support at the Centre for Digital Humanities.

“I think a lot of people think about the IASC program as being one thing or another, whether it’s game or web-based media. But it’s really so much more than that. We do so much in the interactive digital realm – everything from games to virtual reality, augmented reality, to locative media.

The point of this program is really looking towards the future, and future technologies.”

One of the special features part of Monday’s launch was an Oculus Rift virtual reality set. Essentially letting people view the display case virtually while displaying information about some of the artifacts inside of it.

“IASC goes above and beyond just what it does in the classroom, explained first year student and Beamsville, Ontario native Paul Drotos.

“This shows what we can do in the real world with IASC skills, even in first year. I was kind of hesitant about university to start because I didn’t just want to do theory and essays for four years straight. IASC is something that takes it in a completely different direction. It showed me they’re more (hands on) and this is just another example of what IASC is all about. I mean we made an Oculus Rift (experience), how many people can say that about their program?”

The display runs until Friday, March 6.

“The game industry out earns Hollywood by a pretty significant amount, and here in the Niagara Region there are quite a few game companies,” Hawreliak said.

“We’re really focused on what does the future look like for employment opportunities for our students.”