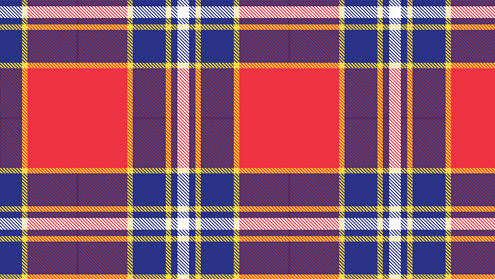 You may have heard of the Tartan Army.

Well now a Brock University alumnus is bringing tartan to the Badgers family. “My last name is of course of Scottish descent and I have been interested in the various tartans of my family,” said MacKenzie whose design is predominantly red and blue with stripes of yellow and white, with a hint of black.

The entire colour breakdown of the Brock University Alumni Tartan not only delves into Maj-Gen Sir Issac Brock himself, but also the many components of what makes up the beautiful Niagara region.

The tartan was designed in honour of Brock’s 50th anniversary as a distinctive yet traditional symbol, to identify and rally the University’s students, alumni, faculty, staff and retirees.

To commemorate MacKenzie’s design an official tartan launch and scotch tasting will take place on Tuesday, Feb. 10 from 6 to 9 p.m. at Rodman Hall in St. Catharines.

“I always thought it was something that Brock should have,” MacKenzie added.

“Somewhere in the deepest bowels of the archives will be written my name forever, as the designer of the tartan. I’m quite excited”