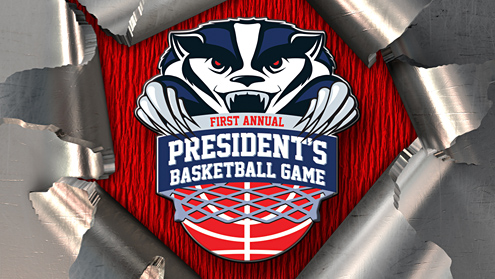 When the Brock men’s and women’s basketball Badgers host Ryerson Rams this Wednesday Jan. 28, some history will be born. Welcome to a twin bill that is officially Brock’s first annual President’s Basketball Game.

Inspired by the spirit that swept the campus for last fall’s sold-out basketball home openers, the President’s Game will be a yearly fixture in the home schedules for the Brock hoop teams.

The women’s game starts at 6 pm, while the men go at 8. A first wave of tickets for the games quickly sold out, though another lot of tickets may go on sale Tuesday at the Walker Complex Welcome Desk. Game night giveaways in the gym will include Brock swag, Toronto Maple Leafs tickets, and a chance to win $1, 000 at halftime.

In the Bob Davis Gym on Wednesday evening, Brock President Jack Lightstone will do a ceremonial tip-off shortly after returning to campus from a memorial service for Howes.

“It’s a wonderful way to honour Dave, and he would love it,” said Lightstone. “He was passionate about enabling young people to participate in sports and recreation, at Brock and throughout the local community. Dave would be very, very pleased to see the gym, on his night, packed with students cheering on the Brock teams.”

Both Brock coaches praised the event and its impact.

“I’m very excited about the game and what it means for Brock and the Niagara region,” said women’s head coach Si Khounviseth. “The buzz and excitement is something I have not seen since the home opener, and it’s something I hope we can grow for all of our home games. This shows Badger pride, and how athletics can enhance the student life experience.”

“It’s tremendous to see the transformation and culture at Brock,” said Kissi. “Not only for this game, but I hope this continues in the future. It not only brings a sense of pride to our players, but also the entire Badgers community.”

The President’s Game was created as way to sustain the campus buzz from last fall’s home openers. Brock’s Marketing and Communications staff worked with University Services and the Athletics Department to establish the theme and organize an evening that gives students a chance to belt out their school spirit.