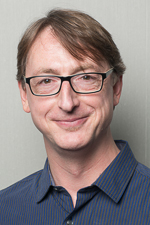 Historian Michael Driedger has added a new title to his many specialties: research ambassador.

Driedger has been selected to serve as research ambassador during the 2014-2015 academic year for the German Academic Exchange Service (DAAD), an organization that promotes research in Germany and abroad using German funds.

“I’m really glad. For me, it’s a chance to pay back to the German government and German universities for the kind of support that I’ve received in the past,” says Driedger, who specializes in the history of Dutch and German Mennonites.

Driedger joins about 100 researchers across North America who are tasked with encouraging colleagues and students to conduct research in Germany and to apply for the many funding programs available to North American scientists and academics.

Driedger himself has had a long research history with Germany, spending a total of six years studying and researching in various places such as Hamburg, Münster, and Freiburg. In 2003-2004, he taught for Brock University in Freiburg, when Brock was still involved in the Canadian Year in Freiburg study-abroad program.

“German universities are really strong, and German university cities are intellectually and culturally exciting places to be these days,” he says. “The German government continues to invest lots and lots of money and energy to encourage foreign students and scholars from North America and around the world to take advantage of German university life.”

On Nov. 6, Driedger and his colleagues from the DAAD office in Toronto will be giving a student information session from 10:30 a.m. to 11:30 a.m. in the International Centre, Room 207. Students and faculty are welcome. This event is part of International Week at Brock.