Seminary opens the doors on its historic collection 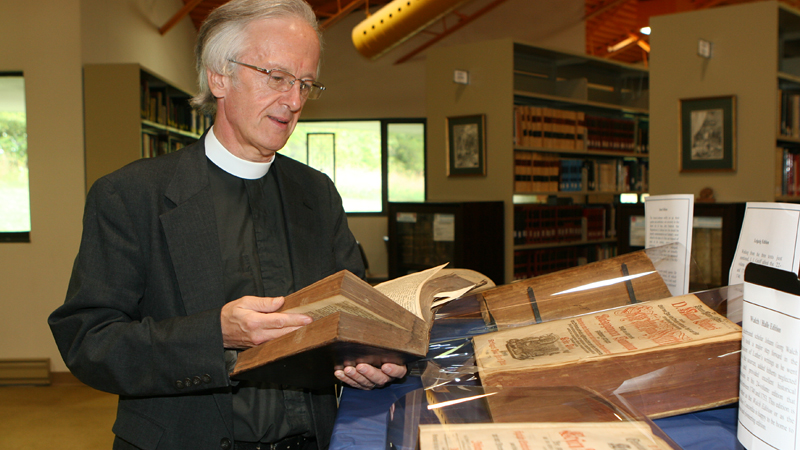 John Stephenson looks at a rare book at the Concordia Lutheran Theological Seminary.

Elizabeth I reigned in England. Henry III was the new king of France. Protestant Reformation, a movement spearheaded by Martin Luther, was a new idea gaining steam.

That’s what life was like when the oldest book in Concordia Lutheran Theological Seminary’s collection was published.

The oldest volume in the seminary’s wealth of rare books in the Martin Chemnitz Memorial Library is from 1575 — a bound installment of the Jena edition of Martin Luther’s works, the foundation of Lutheranism. The Jena edition books and more are viewable to the public during a week-long Rare Book Display that ends on Sept. 15.

The seminary has dozens of valuable old books, some inherited from a former partner institution in the 1970s, some acquired since then. They span from the 16th to 19th centuries, including the entire Leipzig edition of Martin Luther’s writings, which date from 1729 to 1774. The seminary also has the complete 24-volume set of the Walch edition, which dates from 1740 to 1753.

John Stephenson, a professor of Historical Theology, registrar and library director at the seminary, calls the rare books “our treasures.”

“This might be the best rare books collection of Lutheran writing in Canada,” he said.

Another highlight of the collection is a 1704 edition of Seelen Schatz (“Soul Treasures”) by Christian Scriver, a weighty volume of more than 2,000 pages of devotional writing. In the library’s carefully kept archives are about 26 volumes of the first known theological magazine, Unschuldige Nachrichten (“Innocent News”), published from 1701 to 1702.

This is only the second time in five years that the seminary has invited people to view its rare books, library manager Christel Haeck said. They are a valuable historical resource, she said, and should be shared.

“This is our history. It isn’t something we should be hiding under a bushel.”

Physically, the books are fascinating, she said. The volumes are vellum and leather bound, some with ornamental brass fittings. The text is in German, English and Latin.

Unlike a modern-day paperback, which falls apart after repeated uses, the paper in the old volumes is high-quality linen paper. The illustrations are detailed.

“Books were treasures then,” Haeck said. “They were things only the rich could afford. It wasn’t like today, when we buy a paperback for $1.50.”

The library contains about 40,000 books, which are available to any Brock faculty, staff or student with a library card, Stephenson said. They also welcome classes who would like to view the books. A book from the Jena edition of Luther's Works

One comment on “Seminary opens the doors on its historic collection”