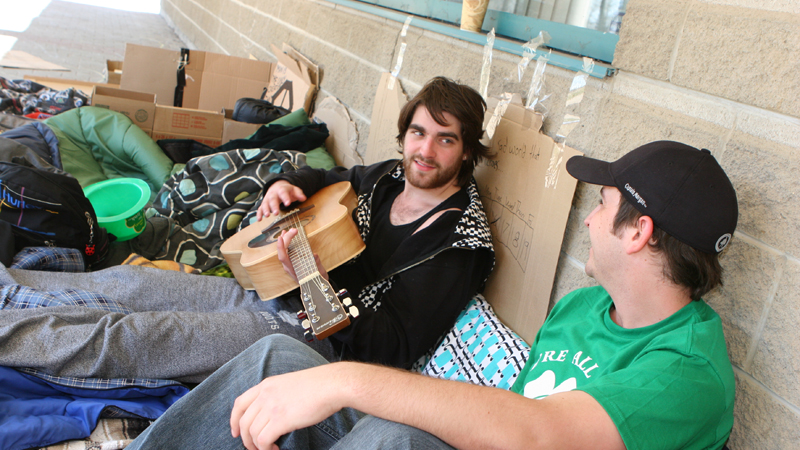 Fruits and vegetables. Firewood. Clean socks. Such comforts are unavailable to a group of about six Brock students this week as they sleep outside Taro Hall as part of the Five Days for the Homeless campaign.

The students must exist only on donations. Their campaign started Sunday night, and until 5 p.m. on Friday, they will sleep, eat and exist outdoors. They may not shower or use their cellphones. They may only access the University’s facilities during school hours. They must also attend class.

Five Days for the Homeless began in 2005 with Business students at the University of Alberta. This is Brock’s third year participating. The local fundraising goal is $2,000, which will go to Community Care of St. Catharines and Thorold.

“Homelessness is something I think about a lot,” said David Poirier, a 20-year-old Dramatic Arts student. “I care about it. I thought this would be a good learning experience.”

The students are developing a new appreciation for healthy food, new socks and warm beds, said Nick Ward, a 22-year-old Accounting student from Welland. The temperatures were most frigid on Sunday night, and “we weren’t accustomed to sleeping on the ground,” he said.

The students camp on a nest of sleeping bags, blankets and cardboard. They pass the time with activities like Frisbee, football and homework. It’s an endurance test for them, but it’s nothing compared to the trials of people who are really homeless, who don’t have a network of friends or a wealth of donations, Poirier said.

“People say, ‘Why don’t homeless people get up and find jobs and work harder to get out of it?’” Poirier said. “But we’ve learned it’s hard to stay motivated when you’re cold. We wake up in the morning and find it hard to get up and do anything.”

People are often homeless for many reasons, including mental health, the cycle of poverty or a lack of affordable housing, said A. J. Heafey, street outreach/program co-ordinator with Community Care of St. Catharines and Thorold. A large contingent are the “hidden homeless,” who couch surf to keep a roof over their heads.

“The topic of homelessness is not new or foreign,” he said. “But this gives us a chance to sit and have a conversation about it.”

One comment on “Students voluntarily homeless in five-day fundraiser”