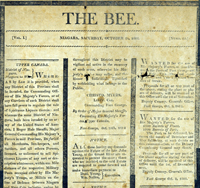 A new website launched this week makes Brock’s records and artifacts from the War of 1812 available to everyone. Niagara's The Bee newspaper, which reported on the death of Isaac Brock at Queenston Heights, comes from University Special Collections and Archives.

The project was launched at the Niagara Historical Society and Museum in Niagara-on-the-Lake on Feb. 18.

More than 1,000 items have been digitized and 22,000 images have been compiled as part of the Brock-led project, which wraps up at the end of March.

The 1812 project provides a snapshot of the time period, giving an overview of the daily social, economic and political lives of Upper Canada inhabitants as well as the details of the war itself. Items like newspapers, business ledgers, letters, clothing, household objects and articles from the war are included on the site. This Fraktur book plate by Anna Hoch, 1816, is from the Jordan Historical Museum. The artwork is from the large Mennonite community in Jordan, Ont.

Project partners include the Department of Canadian Heritage; Brock University, Special Collections and Archives, James A. Gibson Library; the Niagara Historical Society and Museum; Niagara Falls Museums, which includes the Lundy’s Lane Historical Museum; the Port Colborne Historical and Marine Museum; the Grimsby Museum; the Jordan Historical Museum; the RiverBrink Art Museum; Our Ontario; and the District School Board of Niagara. The local heritage museums are members of the Museums of Niagara Association, which has supported this project.

Brock partnered with eight other cultural groups to apply for the funding in October 2008. In June 2009, the University received more than $55,000 from the Department of Canadian Heritage through the Canadian Culture Online Strategy.

The total value of the project is more $100,000, including the Canadian Heritage funding and in-kind contributions of the other partners.

Brock hired two local digitization assistants to oversee the digitization of materials at the University and other museums in the region and uploading the information and images to the website. A Brock student was also hired to help create the project’s website. A teacher from the District School Board of Niagara was employed to create curriculum based lesson plans and activities highlighting the digitized materials.