The 12th Annual Human Trafficking and Social Justice Conference is pleased to announce a call for abstracts. We would like to invite you to submit an abstract for consideration. The length of abstracts should be no more than 3,000 characters. The abstract must identify objectives to be achieved in the session. Abstracts that do not contain objectives will not be considered. Please make your abstract clear, interesting, with valuable information because abstracts will be printed in the conference packet for attendees to make decisions on which sessions to attend.

END_OF_DOCUMENT_TOKEN_TO_BE_REPLACED

Demeter Press is seeking submissions for an edited collection entitled…

“Motherhood” and “military” are often viewed as dichotomous concepts, with the former symbolizing feminine ideals and expectations, and the latter suggesting masculine ideals and norms. Mothers, Military, and Society will contribute to a growing body of research that disrupts this false dichotomy. It will discuss the many ways in which mothers and the military converse, align, and intersect in society. This interdisciplinary volume will explore mothers and their connection with the military from global, contemporary, and historical perspectives. Chapters may include a variety of case studies, empirical research, theoretical perspectives, and personal narratives.

END_OF_DOCUMENT_TOKEN_TO_BE_REPLACED

Posted in Opportunities | Comments Off on CFP [Due – Oct 1]: Mothers, Military, and Society 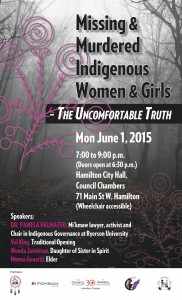 The keynote speaker is Pamela Palmater, Mi’kmaw lawyer, activist and Chair in Indigenous Governance at Ryerson University. Other speakers include Wonda Jamieson, daughter of a sister in spirit, and Norma General, Elder. Val King will provide the traditional opening ceremony.

This community forum is co-hosted in partnership with Hamilton Community Legal Clinic, Hamilton Regional Indian Centre, the Indigenous Studies Program at McMaster University, and the Aboriginal Education and Student Services at Mohawk College. 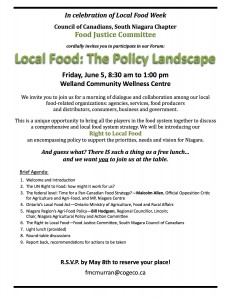 R.S.V.P. by contacting fmcmurran@cogeco.ca to reserve your place!

Who we are and why we’ve called this Forum…

The Council of Canadians is Canada’s oldest independent national citizens’ organization. Established in 1985, the Council of Canadians is funded neither by government nor by corporations, but by members and supports across the country. The foundation of our work is the education and empowerment of people to fight for the values and policies we believe in. Our members, supporters and network of over seventy activist chapters create a powerful voice for social and environmental justice. We work to hold governments accountable and to challenge the unbalanced power of large corporations, and to promote positive social change in Canada and the world.

END_OF_DOCUMENT_TOKEN_TO_BE_REPLACED

Posted in Events | Comments Off on Council of Canadians Event [June 5]: Local Food – The Policy Landscape

The 7th Annual Association for Contemplative Mind in Higher Education Conference will explore contemplative approaches to creating and sustaining just communities: approaches that foster connection while recognizing and honoring difference, with a commitment to the common flourishing of all. These approaches should examine the profound ways in which our social locations within higher education–based on age, gender, sexual orientation, discipline, ability, religion, race, social/economic class, nationality, contemplative tradition–affect and are affected by differing levels of advantage or disadvantage. As we recognize our interdependence and our responsibilities to one another, we can cultivate more ethical, compassionate, and more socially just communities.

END_OF_DOCUMENT_TOKEN_TO_BE_REPLACED

Posted in Events, Opportunities | Comments Off on CFP [Due – May 15]: ACMHE Conference – Building Just Communities

The notion of “Indigenous peoples” is a recent one that originates in the Americas’ First Nations efforts of the 1970s to raise national and international awareness regarding their plight. The critical issues pertained to political and cultural oppression, social discrimination, and the process of loss of land and territory, all stemming from European colonization. These struggles marked indigenous issues’ entry on the international scene.

END_OF_DOCUMENT_TOKEN_TO_BE_REPLACED

CFP [Due – May 15]: The Evolution of the Geopolitical Economy of the 21st Century World

A Multi- and Inter-disciplinary International Conference on…

‘From the Thirty Years’ Crisis to Multi-polarity: The Evolution of the Geopolitical Economy of the 21st Century World’

The centenary of the outbreak of the First World War was marked in Canada and around the world in 2014. 2014 also marked the centenary of the opening of what noted historian, Arno Mayer, called the ‘Thirty Years’ Crisis’ of 1914-1945, spanning the First World War, the Great Depression and the Second World War. This long crisis birthed a new world. The old world of the nineteenth century expansion of the empires of industrial capitalist countries, often mistakenly termed ‘liberal’, met its end. It gave way to an inter-national one populated by a variety of welfare, Communist and developmental orders in national economies whose states had, moreover, greater legitimacy among newly enfranchised women and men than the imperial and colonial regimes they replaced. The Thirty Years crisis also radically redistributed economic, political, military and cultural power within countries and among them. Critical cultural and intellectual changes – new movements in art, new media, and new paradigms of understanding, particularly in economics, inevitably accompanied these historic shifts.

END_OF_DOCUMENT_TOKEN_TO_BE_REPLACED

Posted in Events, Opportunities | Comments Off on CFP [Due – May 15]: The Evolution of the Geopolitical Economy of the 21st Century World 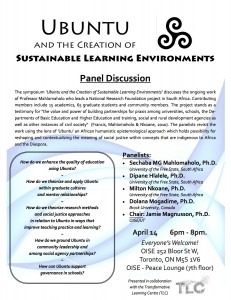 Symposium: Ubuntu and the Creation of Sustainable Learning Environments

END_OF_DOCUMENT_TOKEN_TO_BE_REPLACED

Our topic for the month of April is: “Activism in academia: A good idea, in theory”

The Ecohealth in Action Webalogue series, hosted by the Western Node of CoPEH-Canada, aims to highlight the diverse ways in which practitioners, professionals, policy-makers, community members and researchers are responding to topical issues at the nexus of health, ecosystem, and society. The interactive 90-minute sessions will focus especially on action and practice, and will purposefully profile issues that cut across disciplines, sectors, jurisdictions, species and geographical boundaries.

END_OF_DOCUMENT_TOKEN_TO_BE_REPLACED

Posted in Events | Comments Off on Ecohealth Webalogue [April 15]: Activism in Academia

Violence against animals is horrific wherever it occurs. Yet much of it is normalized and hidden from public view on factory farms, in slaughterhouses, in the wildlife trade, in cosmetics testing facilities. Most animals are harmed in the pursuit of money.

There are significant differences between a large agricultural corporation seeking profit and someone with few options having to take a job working for that corporation, however. Close to home and around the world, working class and poor people are really struggling. In countries like Canada, unemployment and underemployment persist. We have been told that corporate tax cuts would create jobs, yet many of the few positions now available provide only poverty wages and part-time hours. Globally, over two billion people try to live on less than two dollars a day. In much of the global south, people face a “choice” between poverty wages in factories, or poverty income on farms. People are not poor by choice, and they should not be mocked or demonized.