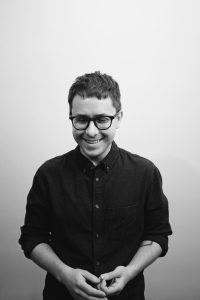 Eric Schmaltz (BA ’11, MA ’12) is a graduate from Brock’s English Language and Literature program. He went on to earn a PhD from York University and is currently a Postdoctoral Fellow at the University of Pennsylvania.

Poet and scholar Eric Schmaltz took full advantage of his time at Brock to explore the world of words and images.

“In many ways, Brock is where I began to orient myself as a poet-scholar,” says Schmaltz (BA ’11, MA ’12), who celebrated the release of his debut book earlier this year.

“Brock offered me the space, resources, and mentors to encourage both creative and academic experiences that have been formative for my profile.”

Professors including Gregory Betts, Tim Conley, Adam Dickinson, and Linda Steer provided critical and creative spaces in their classrooms and demonstrated an openness towards engaging with art and literature.

“These values, offered to me first at Brock, remain important to my academic work as a SSHRC-funded Postdoctoral Fellow at the University of Pennsylvania and as an emerging poet.”

Schmaltz majored in English Language and Literature with a minor in the former Great Books & Liberal Studies (GLBS). His courses in GBLS were often cross-listed with courses in Visual Arts and Studies in Arts and Culture.

But the Niagara arts community outside of Brock was just as influential.

“Of great importance to me was the time I spent with the visual arts community that exists in St. Catharines, independent of Brock––mainly, the Niagara Artists Centre (NAC),” says Schmatlz.

“NAC is one of the most valuable centres in St. Catharines whose openness and community-driven mission adds essential character and cultural experience to the Niagara Region. I collaborated on a number of events and programs with the NAC, including literary readings, workshops, special events, and exhibitions.”

Schmaltz has published peer-reviewed articles, chapbooks, literary articles, book reviews and other miscellaneous writings. His work has been published in journals and magazines such as Canadian Literature; Science Fiction Fiction Film and Television; Jacket2; Lemon Hound; The Capilano Review and Broken Pencil.

His solo show, Assembly Line of Babel, was held at the NAC, St. Catharines, in 2015. As Schmaltz told Touch the Donkey, the series explored what it means to make objects and meaning in a ready-made culture.

Schmaltz has also participated in group visual art exhibitions and curatorial projects. In 2017, Schmaltz collaborated with Graeme Ring and Kevin McPhee to present Intereactions at St. Catharine’s In the Soil Arts Festival. His work has also appeared in group exhibitions in Toronto, Kitchener, Vancouver and Buffalo, as well as at Brock’s Rodman Hall Art Centre. 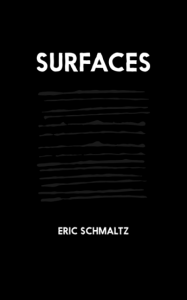 Schmaltz’s first book, Surfaces (Invisible Publishing, 2018), came out in the spring of 2018 and continues his exploration of writing and communication. Combining found elements, graphic design, imprint, translation and typography, Surfaces questions what happens to us when we write through digital channels.

Surfaces, Schmaltz told Invisblog, is a book about processes, foregrounding things coming apart and coming together. Standardized communication can lock us into a way of being; the antidote to that is “endless variation and infinite permutability,” and Surfaces is all about possibilities.

Schmaltz’s current projects include guest editing the inaugural edition of Not Your Best, an annual magazine to be published by knife|fork|book in Toronto. Schmaltz will be exploring work by writers and artists who work at the intersection of visual art and poetry.

When asked what advice he might offer young authors in our Faculty, Schmaltz emphasizes the importance of getting involved.

“Get involved with the persons and communities whom feel right for you,” he says.

“Make a contribution. No matter its size, it is valuable. Do this responsibly. Do this not just for yourself, but for others.”