Whether in recent conflicts in Afghanistan and Syria or the recent museum fire in Brazil, cultural workers and community volunteers mobilize to rescue a community’s heritage.

Fourth year undergrad and graduate students in the Department of Classics got a taste of the work involved in an museum evacuation simulation run Friday afternoon by internationally-recognized expert Brian Daniels. 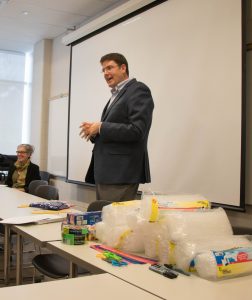 Brian Daniels, who has trained cultural workers around the world in “cultural first aid,” prepares the students in CLAS 4P28/5V28 Archaeological Ethics for their simulated museum evacuation drill.

Daniels, who works with the Penn Cultural Heritage Center, has run museum evacuation training programs around the globe. He has worked on the ground in Iraq and trained local culture workers to in Afghanistan and Syria to protect culturally significant artifacts.

In fact, the evacuation exercise Brock students did had just been done the day before in Mali for military personnel, disaster responders and heritage professionals.

“I’m very excited because we can use the Cypriot collection here,” said Daniels. “Usually we use fake artifacts for the first time in running these.”

After a presentation by Daniels on the history, process and principles of evacuating and protecting artifacts during a disaster, the class had just twenty minutes to develop their strategy to safely move all the artifacts from the workroom to the designated safe room. 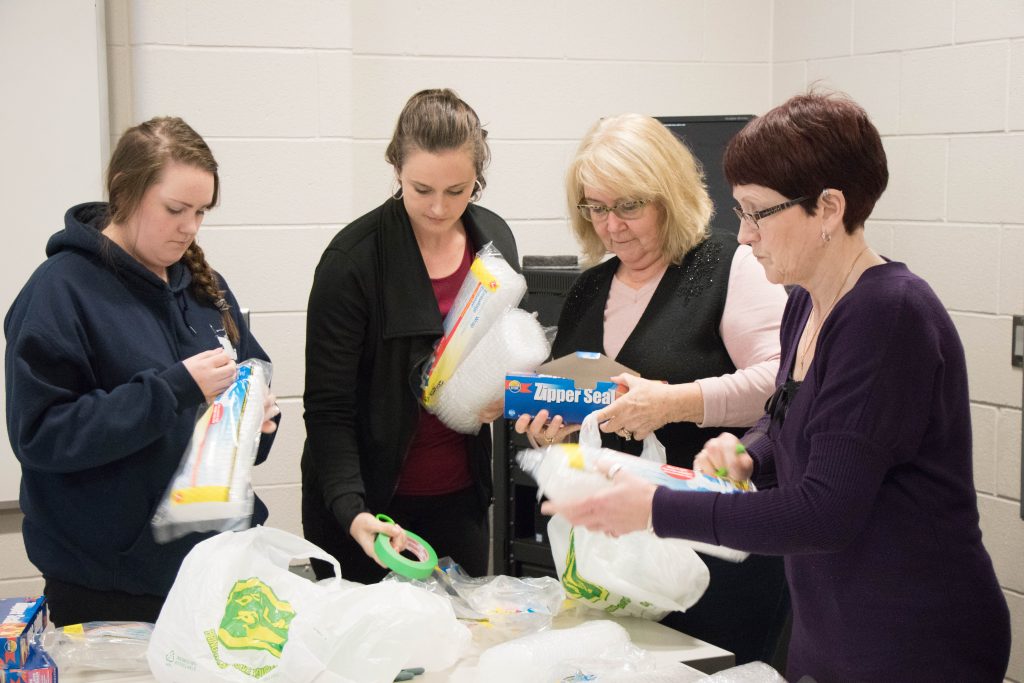 Archaeology students Sabrina Taylor, Nicole Gavin, Gloria Szylak, and Sarah Murray prepare for a museum evacuation exercise run by Brian Daniels of the Penn Cultural Heritage Center on Nov. 30. The class had just twenty minutes to develop a plan to evacuate artifacts from the ‘disaster zone’ in the Classics archaeology lab to a ‘safe room’ on the first floor of the International Centre.

The students then had 45 minutes to systematically inventory, package, and transfer the artifacts. The students were successful in moving all their artifacts to the safe room, a fundamental part of the exercise—but something not all teams are able to do. The exercise, Daniels noted, is designed to make participants feel stressed.

“In light of current political crises and recent catastrophes, this exercise provided the students with hands-on experience in responding to a heritage emergency,” said Greene.

“Such scenarios reinforce the need for all museums to have management plans to safeguard the heritage under their stewardship, recognizing its value to local and global communities.” 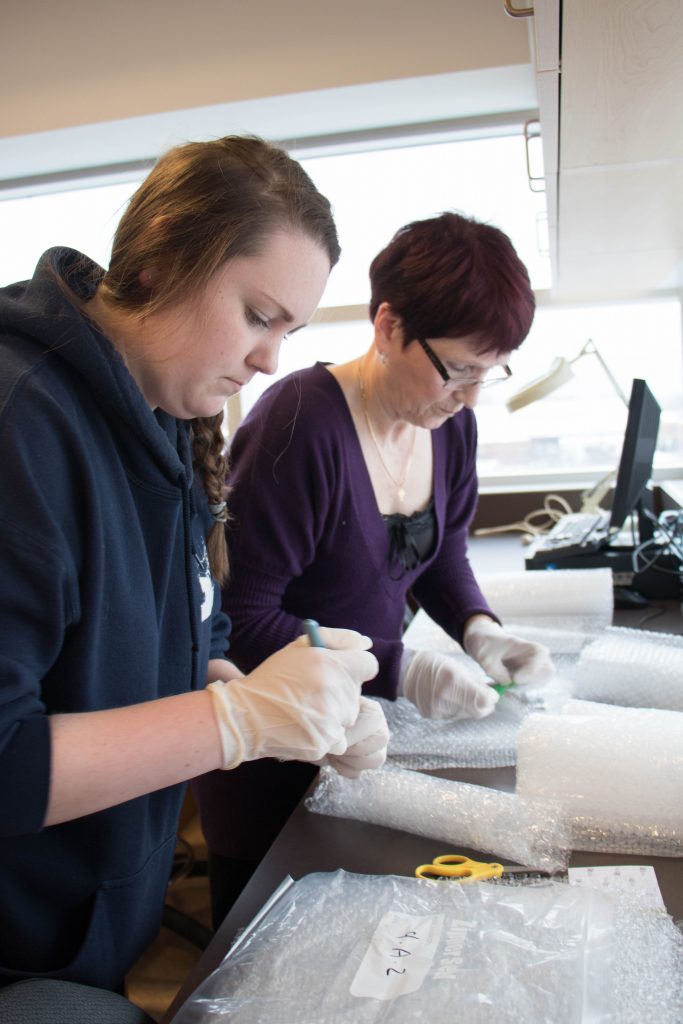 Sabrina Taylor and Sarah Murray wrap artifact fragments before they are transported to the ‘safe room’ on the first floor. With only 45 minutes to record and evacuate six tables of artifacts, the students had to work quickly but accurately. 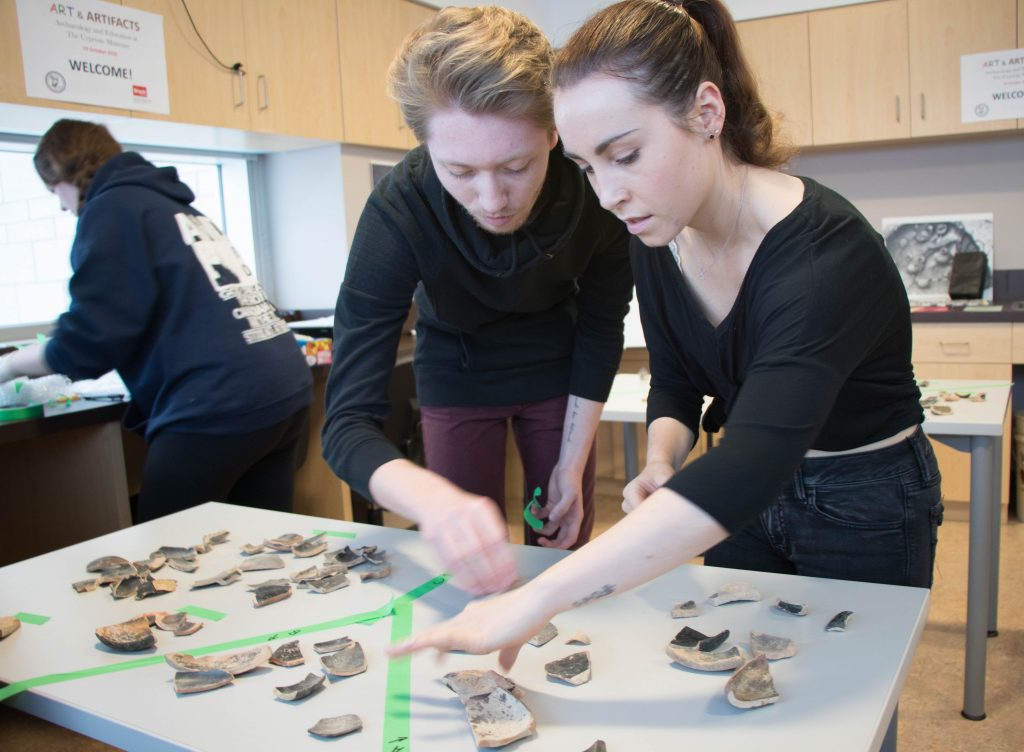 Matthew Hertel and Emma Celestini plan how to best inventory and pack up the artifact fragments. The exercise was done using real pottery sherds from the Cypriot Museum’s teaching collection.

In the debrief, Daniels complimented the students on their clear division of work and how well they worked as a team—although no one had seemed to notice when a student was quietly “abducted” from the group!

“The exercise demonstrated how many factors have to be considered when cultural heritage artifacts are being evacuated to a safe location,” wrote student Sarah Murray on the class blog.

“The plan that we created was detailed enough to initiate the evacuation process but flexible enough for us to adapt.” 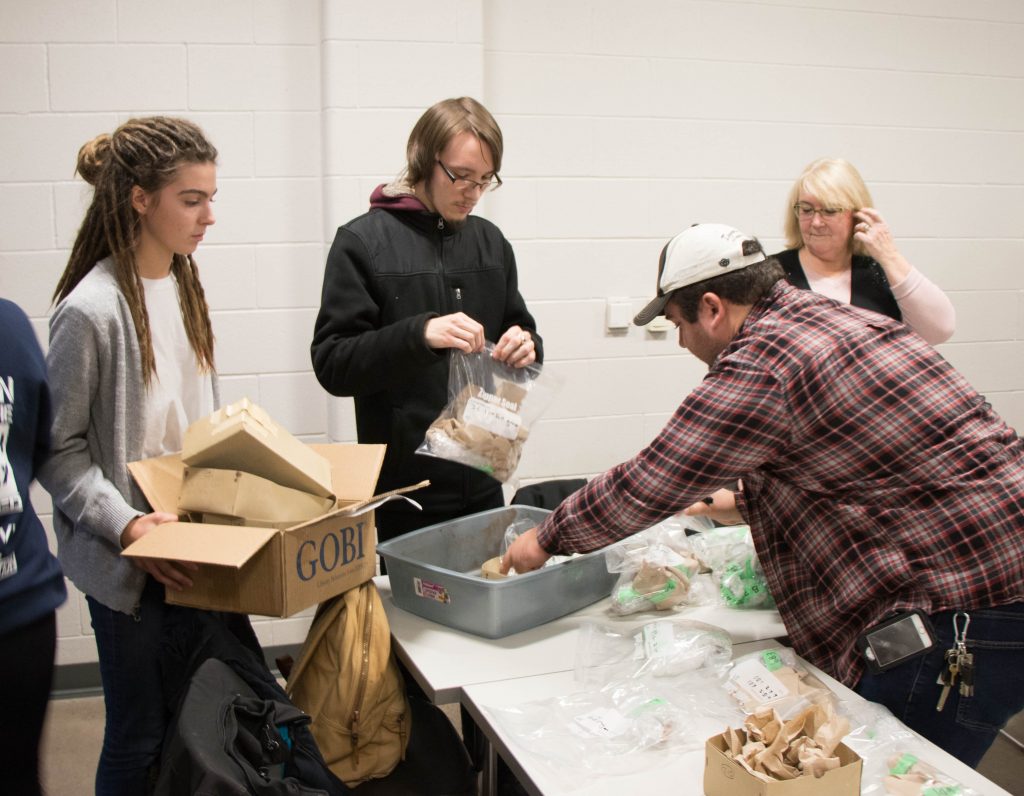 In the safe room, Hannah Greczkowski, Benjamin Vaillancourt, Gloria Szylak and Brian Abfal receive the artifacts and check them against the inventory lists.

The simulation exercise concluded a week of talking about the protection of cultural heritage during wartime. Students in CLAS 4P28/5V28 Archaeological Ethics have been exploring a range of ethical dilemmas about doing archaeology in the 21st century.

Topics have included the ownership of cultural heritage; looting and theft of antiquities; repatriation of heritage artifacts to source nations; preservation of heritage at risk; site preservation, reconstruction, and tourism; and the rights and responsibilities of archaeologists in their host communities and within the broader discipline.

“In each case, we bring contemporary issues into the classroom setting,” says Greene, who also serves as the Vice President for Cultural Heritage of the Archaeological Institute of America. 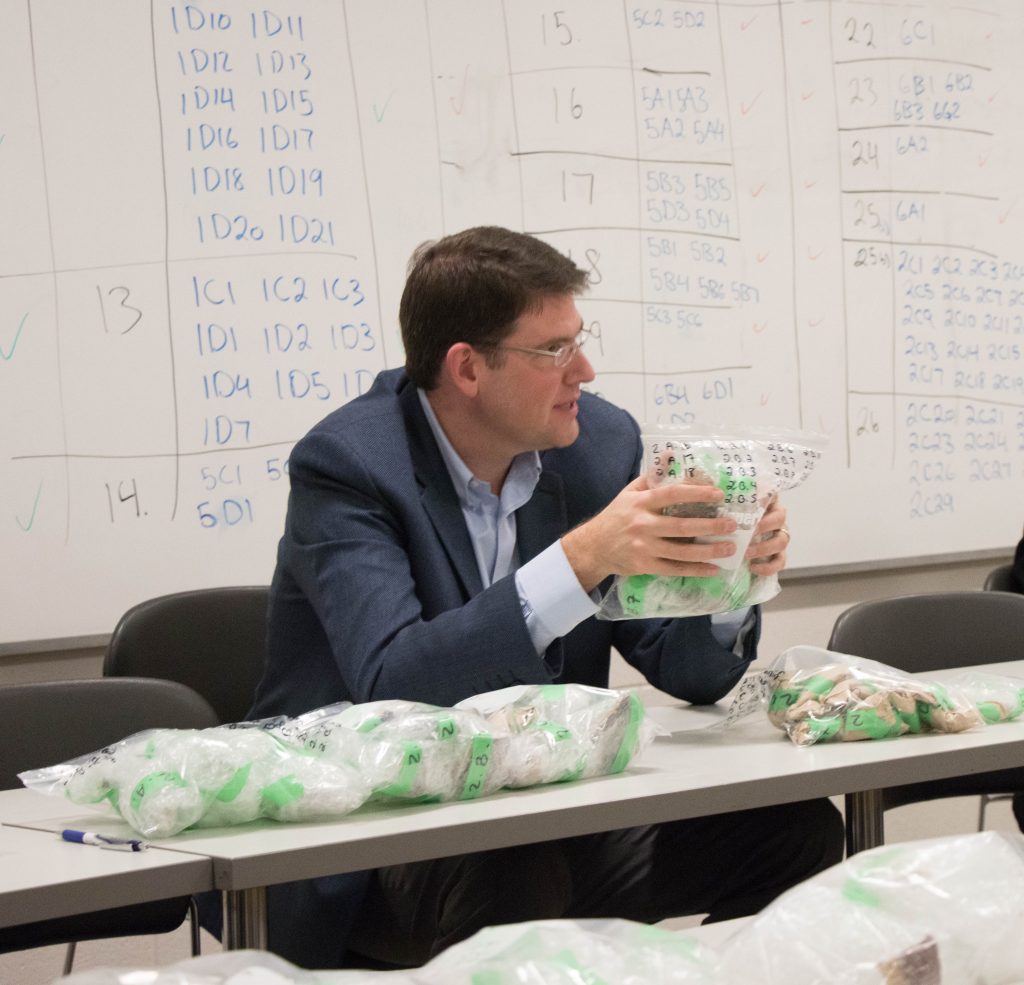 Brian Daniels debriefs the students following the successful evacuation of all artifacts from the archaeology lab. The exercise is designed to simulate the stressful conditions that cultural workers find themselves in when disaster or conflict strike.

The Penn Cultural Heritage Center provides a forum for discussion of the meaning of heritage and the roles of communities in heritage preservation. Daniels and the other members of Safeguarding the Heritage of Syria and Iraq (SHOSI) work closely with the Smithsonian Institution, as well as organize workshops focussing on emergency preservation and risk management.

Members helped with the evacuation of the Ma’arrat al-Nu’man Museum in Afghanistan to Switzerland during the conflict of the early 2000s. In 2014, the group began training Syrian museum professionals in Turkey as Syrian cultural monuments were being destroyed at an alarming rate. Syrian cultural workers have successfully used Second World War techniques to protect priceless Byzantine mosaics at the Ma’arra Mosaic Museum through three bombing attacks.

Cultural workers have also been trained in documenting and protecting looted sites, such as the cuneiform tablets at Ebla, and in assisting knowledge transfer of traditional cultural practices among refugees.

A version of this story appeared in Brock News.

Salam Al Quntar et al. “Responding to a Cultural Heritage Crisis: The Example of the Safeguarding the Heritage of Syria and Iraq Project.” American Schools of Oriental Research, September 2015.