Holding history in your hands

Classics major Keegan Bruce shared her photo of ancient coins as part of our Instagram contest, #mybrockhumanitiesmajor. In her post, Keegan contemplates what ancient coins can tell us, and how it feels to hold something almost 2000 years old in her hand! 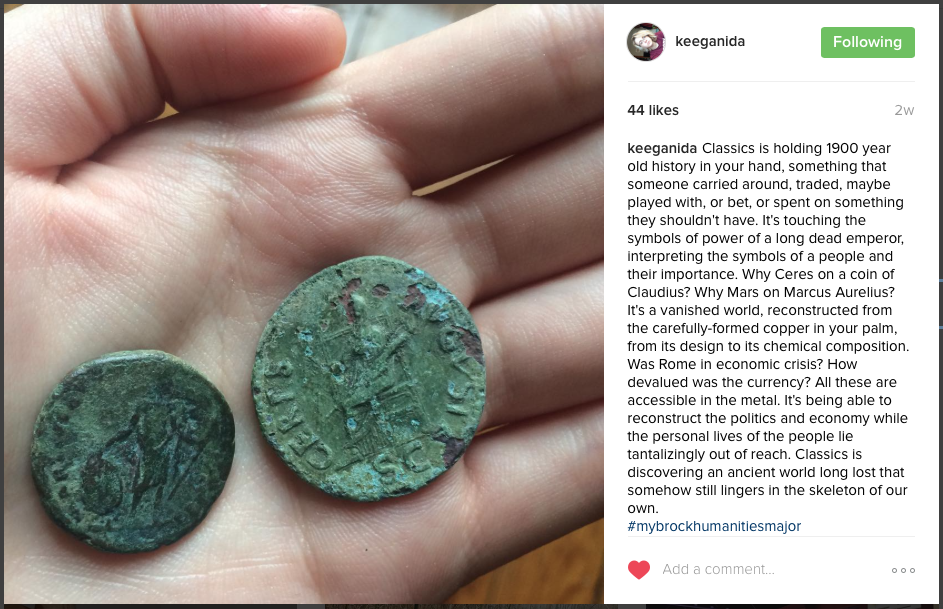 Classics is holding 1900 year old history in your hand, something that someone carried around, traded, maybe played with, or bet, or spent on something they shouldn’t have. It’s touching the symbols of power of a long dead emperor, interpreting the symbols of a people and their importance. Why Ceres on a coin of Claudius? Why Mars on Marcus Aurelius? It’s a vanished world, reconstructed from the carefully-formed copper in your palm, from its design to its chemical composition. Was Rome in economic crisis? How devalued was the currency? All these are accessible in the metal. It’s being able to reconstruct the politics and economy while the personal lives of the people lie tantalizingly out of reach. Classics is discovering an ancient world long lost that somehow still lingers in the skeleton of our own.