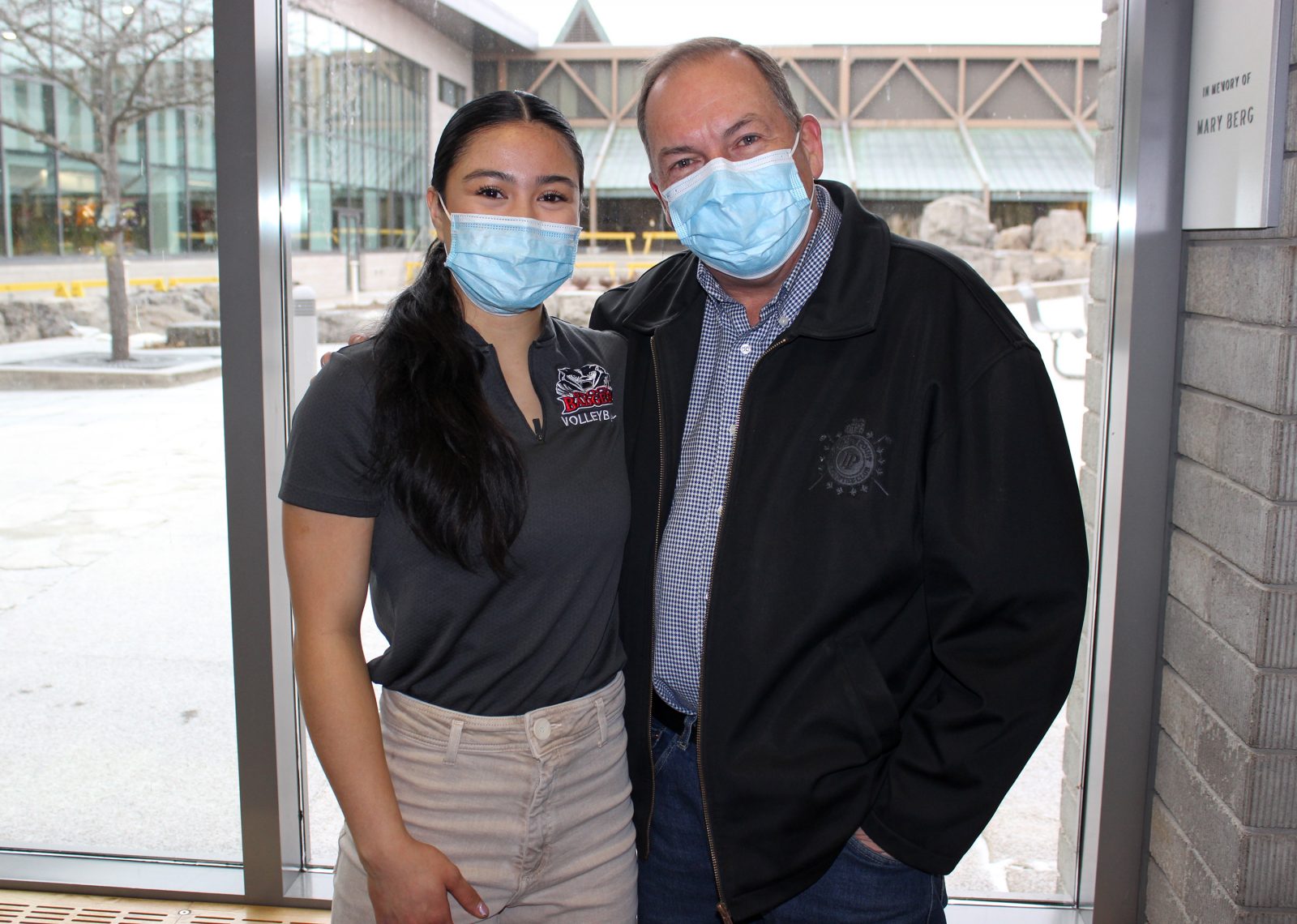 Third-year Medical Sciences student and Brock women's volleyball varsity athlete Aleiah Torres recently met with Chris Rupp from Wise Guys Charity to share with him what an award she received from the group has meant to her life.

When the Brock Badgers made the return to the field, court and ice this year, they did so with significant community support in their corner.

Backing the Badgers on their successful 2021-22 run — which saw them capture one national and six provincial championship titles — were several partners and donors who ensured Brock’s student-athletes had the necessary facilities and financial support to excel.

Among those partners was the Wise Guys Charity, which is known for its community contributions in Niagara, and is a key supporter of Brock University.

The charitable organization has had a significant impact on the academic and athletic journeys of many Brock students, including Aleiah Torres.

A third-year Medical Sciences student and sophomore on the Brock varsity women’s volleyball team, Torres was the recipient of the Wise Guys Charity Fund Athletic Scholarship of Excellence two years in a row.

“As a high school student coming from a single-parent household, I used to dream of scoring a scholarship like this to help pay for my education,” said Torres, who is originally from Toronto.

The scholarship is awarded to two varsity student-athletes annually and is renewable throughout each recipient’s studies, provided they abide by Ontario University Athletics (OUA) regulations and meet all requirements.

“With this scholarship contributing to my tuition and living expenses, I have been able to focus on my studies and extracurricular involvement at Brock instead of worrying about juggling a part-time job,” Torres said. “It’s a great feeling to be recognized for your hard work. Seeing how generous the Wise Guys have been to me during my time at Brock inspires me to work even harder and pay it forward in any way I can.”

In addition to her involvement in Brock Sports, Torres has volunteered with Brock’s Recruitment team and the Brock University Students’ Union (BUSU). She was recently elected as a BUSU Board of Director for the upcoming school year.

“While we look to our student-athletes to represent our University and showcase their Badger pride both on and off the court, we look to support them and set them up for success in as many ways as possible,” said Melissa Krist, Director, Brock Sports. “That is why student awards for our athletes, like the Wise Guys Charity Fund Athletic Scholarship of Excellence, play a crucial role in the future of not only Brock Sports, but also our institution. Thanks to Wise Guys’ commitment to lessen financial stressors, student-athletes like Aleiah can show up undistracted and give each game their all.”

Brock welcomed Chris Rupp from Wise Guys Charity Fund’s Board of Directors to campus a few weeks back to meet Torres. Together, they spoke about the many benefits of attending Brock and living in Niagara, with Torres also providing insight into the impact the Wise Guys’ award has had on her life.

Rupp, who has been a Niagara resident for most of his life and involved with the Wise Guys Charity for 30 years, was overwhelmed with pride as he learned more about what the scholarship has helped Brock students to accomplish.

“As part of the stewardship team, I have one of the best jobs on the board,” said Rupp. “I get to show up as a representative of this amazing charity and actually see the places and people that Wise Guys have supported.”

Wise Guys Charity Fund was founded more than 30 years ago by current chair Doug Smith and his dad to raise funds for the new St. Catharines YMCA building. Originally ‘Y’s Guys,’ the charity was renamed to Wise Guys in 1997. Since its inaugural year, the charity has continued to operate with no administrative overhead, with all work conducted by volunteers and every dollar raised going back into the Niagara community.

“While it is clear that Wise Guys Charity Fund has been integral in raising necessary funds for causes all around the region, Brock University is extremely grateful to have support of valuable community groups like them,” said Sonia Dupte, Executive Director, Development and Campaigns. “Brock succeeds because of the community surrounding us and we are eternally grateful to Wise Guys for ensuring our community is a strong one.”