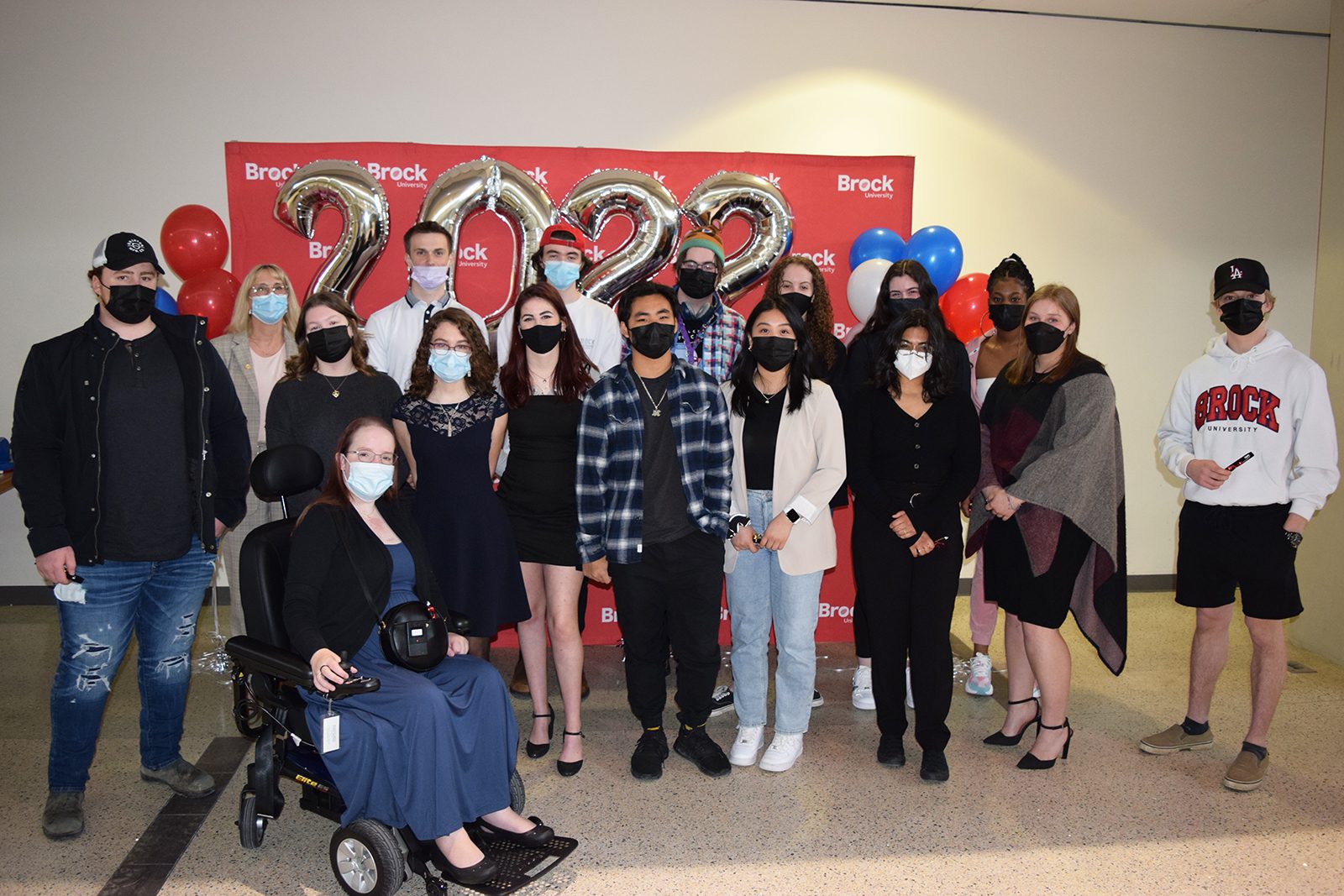 Interim Brock University President Lynn Wells (second from left) poses with 16 student recipients of the Residence Hall/House/Court/Block Awards. Forty-seven of these residence community awards are presented annually to students who have demonstrated leadership qualities that made their communities attractive places to live. In total, nearly 100 awards were presented at the 40th annual Residence Awards on Friday, April 1.

Nearly 100 awards were handed out last week in recognition and appreciation of Brock University residence students who have contributed to a positive student life experience.

The 40th annual Residence Awards took place Friday, April 1 in Market Hall and was attended by more than 130 people, including Brock Interim President Lynn Wells, Vice-President, Administration Ken Chan and Associate Vice-President, Ancillary Services Ed Wall. It was the first time in two years the celebration has been held in person.

Director of Residences Jamie Fleming says the Residence Awards are a celebration of “what res life is all about.” 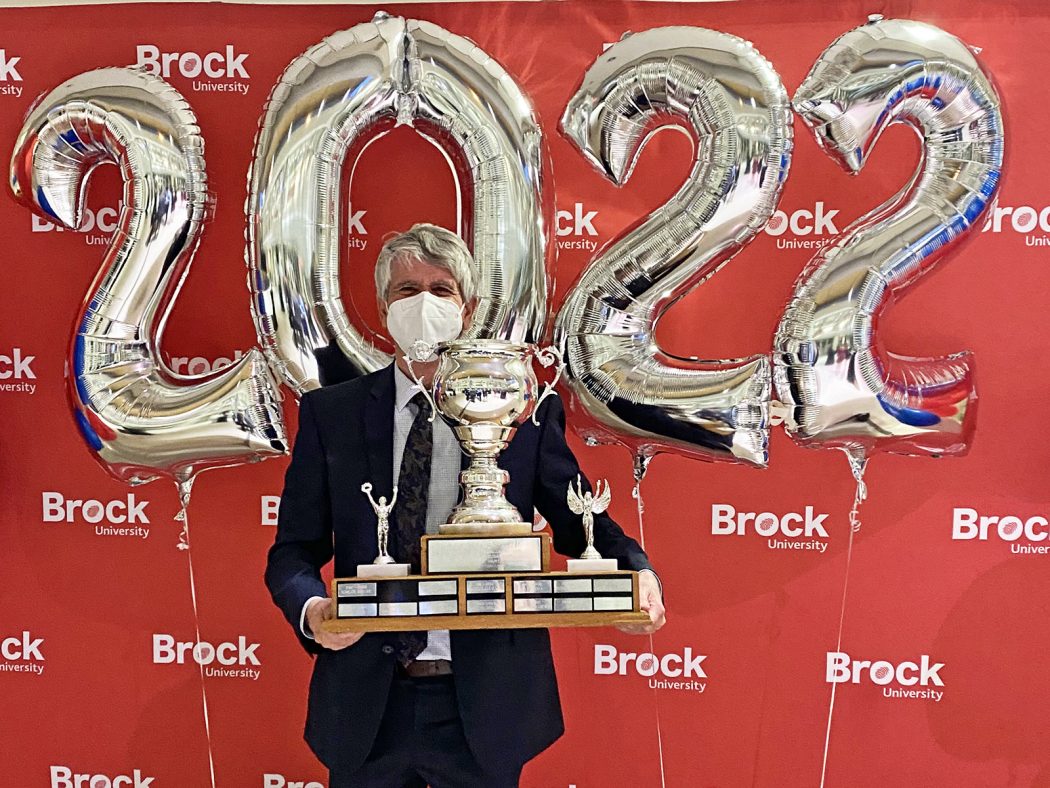 Director of Residences Jamie Fleming holds the Fleming Cup, which was renamed this year in honour of Fleming’s upcoming retirement and his 40 years of service to the University.

“It’s an opportunity to thank, congratulate and recognize those who have made a positive impact within residence and put forth that special effort to make residence an outstanding place to live, learn and grow,” he said. “These students make residence much more than simply a place to eat and sleep.”

In recognition of Fleming’s upcoming retirement and 40 years of service to the University, the Marriott Cup was renamed the Fleming Cup. The award is given to the residence community with the highest overall standing in residence games, activities and events for the academic year.

Fleming says he was surprised by the tribute and feels honoured to have his name on a trophy that celebrates enthusiasm, commitment, dedication and sportsmanship.

“I suppose one of best things about the cup being renamed after me is that maybe I’ll get invited back to celebrate Residence Awards with Department of Residences staff and all the very community-minded and involved residence students,” he said.

Residence Don Jessica Thornhill accepted the Fleming Cup on behalf of the Merritt Hall Wizards, the residence community on the fifth floor in Alan Earp Residence.

“Accepting the Cup from Jamie after seeing the large positive impact he has had on residences at Brock was a great privilege and something I will never forget,” she said.

Thornhill is proud her students attended residence events in good numbers this year.

“The Wizards are such an upbeat and social group and I’m so thankful that I got to be a part of their residence experience,” she said.

Another highlight of the event was the Les McCurdy-Myers Award, which was established in 2016 in recognition of retired staff member Les McCurdy-Myers’ long-standing dedication to supporting the development of student leaders. The annual award is the only residence award not given to a student, but rather to a staff member. McCurdy-Myers attended the event to announce this year’s recipient, Melissa Ghirardi, Residence Service Desk Clerk.

In a nomination letter, Ghirardi is described as “the most kind-hearted individual” who “takes her time with each and every student she meets, providing support to ensure they have all the information they need.”

Ghirardi says supporting Brock student leaders is the most rewarding part of her role.

“This award is special because it comes from the student leadership,” she says. “These dedicated and bright-eyed students give it their all to make student life memorable and significant.”

The family of the late Tammy Brown, former Manager of Residence Admissions and Administration, attended the celebration to present the Tammy Brown Residents Committed to Excellence Award. The award was renamed in 2021 in honour of Brown, who passed away in 2020 from cancer. It is typically given to graduating upper-year students in recognition of their exceptional contributions to residence life and for modelling respect and leadership.

The following is a collection of major award winners: