Provincial and national championship matches on tap for Brock Sports 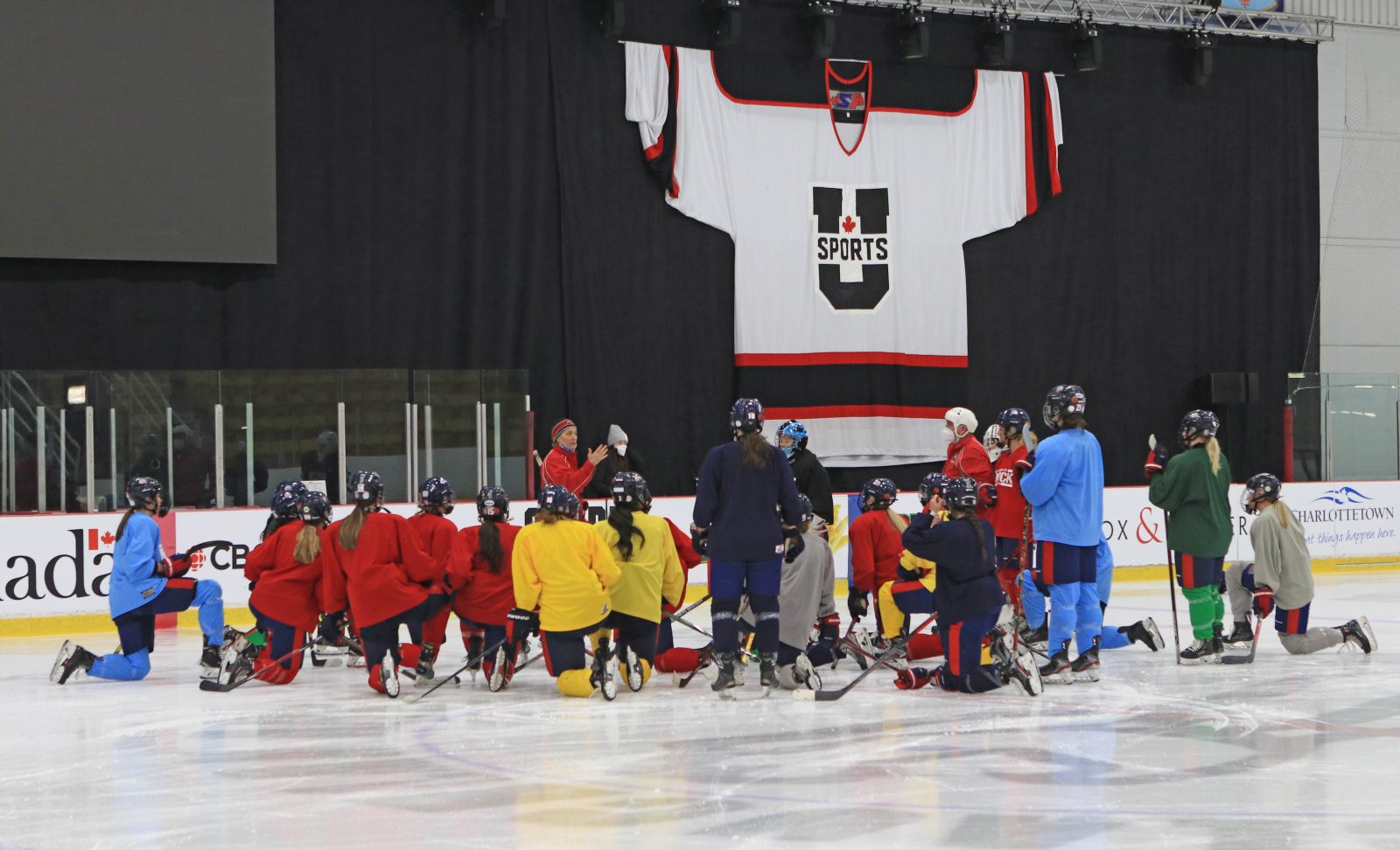 Brock Badgers head coach Margot Page talks to the women’s hockey team at UPEI’s MacLauchlan Arena on Thursday, March 24 ahead of the start of the U SPORTS National Championships in Charlottetown, P.E.I.

And then there were five.

That sets up another busy weekend of varsity sports action, with opening-round U SPORTS matchups for women’s hockey and women’s volleyball Friday, March 25, followed by a first-ever Ontario University Athletics (OUA) championship final tripleheader in St. Catharines Saturday, featuring men’s and women’s basketball and men’s hockey all going for gold at home.

On-campus parking is free in Zone 1 at Brock on the weekend. Please note that tickets for the two basketball games must be purchased separately. Brock alumni will be contacted directly with information about VIP access and discounted tickets.

The Brock women’s hockey team held its final practice at UPEI in Charlottetown Thursday morning to prepare for its U SPORTS National Championships quarter-final matchup against the University of Saskatchewan Friday at 2 p.m. (all times EST). Brock is the No. 4 seed and Saskatchewan is No. 5. WATCH / TICKETS 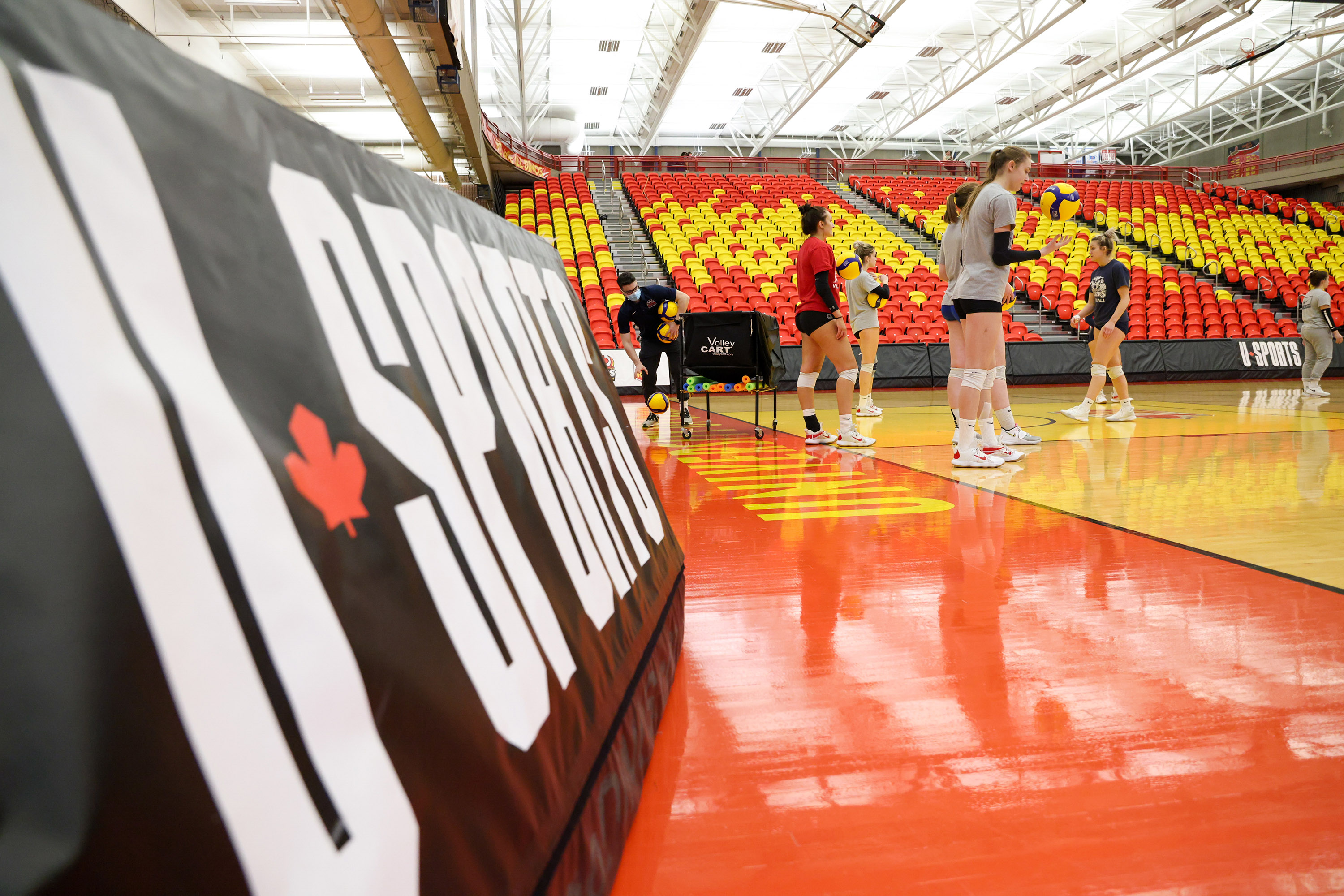 The Brock women’s volleyball team took to the Jack Simpson Gym at the University of Calgary for its first practice of the U SPORTS Women’s Volleyball Championships on Thursday, March 24.

The Badgers women’s volleyball team arrived in Calgary Wednesday night and will open its U SPORTS National Championships campaign Friday at 3 p.m. against No. 7 Mount Royal. Brock is the No. 2 seed and is undefeated this season. WATCH / TICKETS

Competing at home Wednesday night, the Badgers women’s basketball team beat Western 77-58, setting up a rematch of the 2020 OUA Critelli Cup final against Ryerson. Brock, the No. 2 team in the country, will host the Rams Saturday at noon at Bob Davis Gymnasium. Both teams have now qualified for the U SPORTS Final 8 in Kingston March 31 to April 3. WATCH / TICKETS

After watching the women’s team secure their place at the nationals Wednesday night, the Brock men’s basketball team did the same, beating McMaster 88-75. A big upset by Queen’s over defending U SPORTS champion Carleton means the Badgers will host their first Wilson Cup OUA final in 17 years. Game time at Bob Davis Gymnasium is 4 p.m. Both teams will see each other again in the U SPORTS Final 8 in Edmonton March 31 to April 3. WATCH / TICKETS

Playing on the road at Ryerson’s Mattamy Athletic Centre arena is never easy, but the Badgers men’s hockey team put on a dominant performance in a 5-2 win over the Rams in the OUA Queen’s Cup semifinal Wednesday night. Brock will host the Queen’s Cup final at the Seymour-Hannah Arena in St. Catharines Saturday at 7:15 p.m. against Université du Québec à Trois-Rivières, which plays in the OUA. Fan buses will take Brock students to the game, leaving from Lowenberger Residence starting at 6 p.m. The bus is free but a game ticket purchased in advance is required. With its win Wednesday, the Badgers men’s hockey team also secured a spot in the U SPORTS University Cup national championship being contested April 1 to 3 in Wolfville, N.S. WATCH / TICKETS