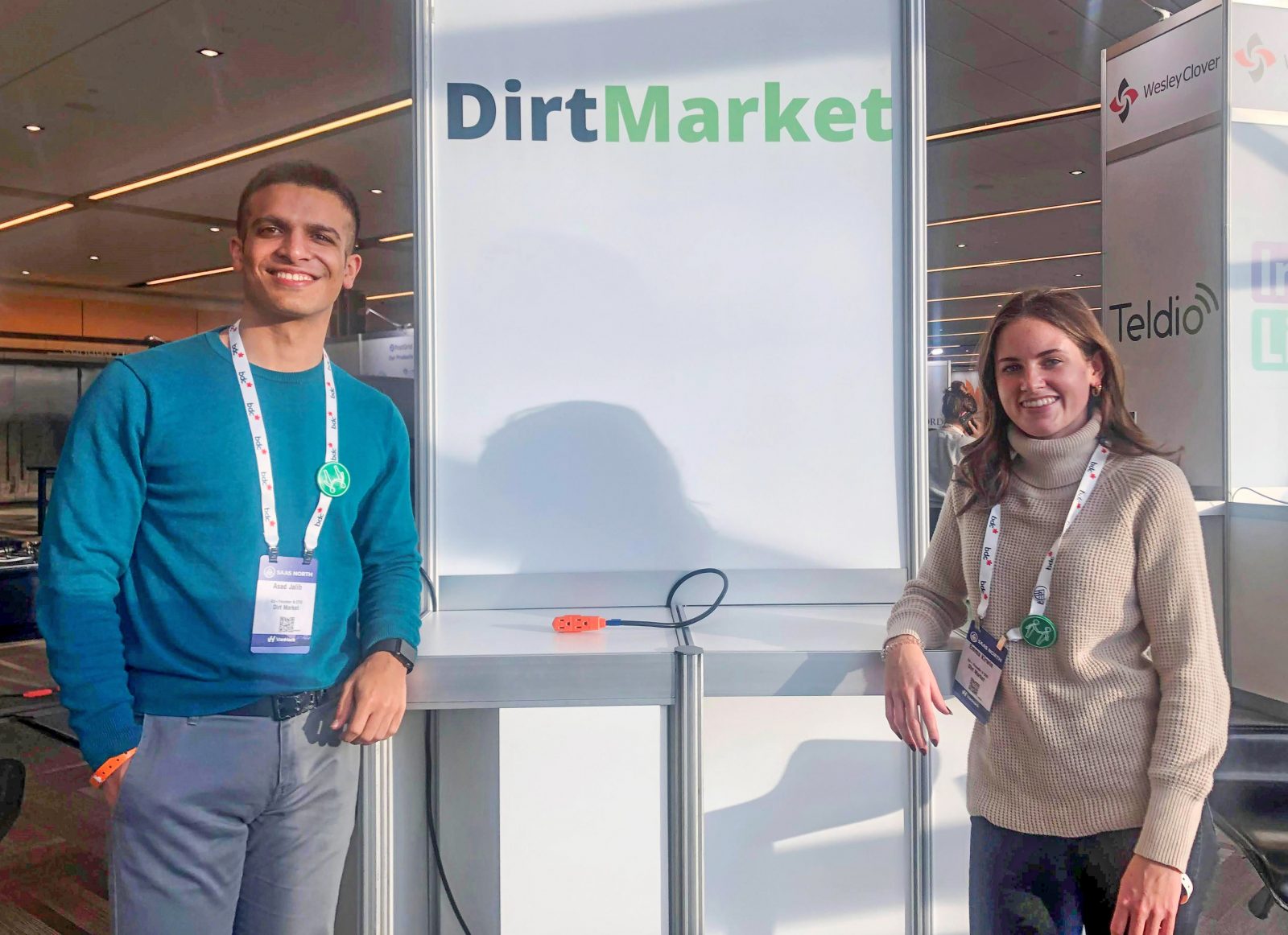 DirtMarket, founded by Brock alumni Asad Jalib and Emma Kirwin, has been named in the Top 100 Tech Companies to Watch in Canada by FoundersBeta, an online global community of founders, innovators and changemakers.

DirtMarket founders and Brock graduates Emma Kirwin (BA ’21) and Asad Jalib (BBA ’20) have been hard at work building their company from the ground up — and the tech industry has taken notice.

After less than a year in business, DirtMarket was recently ranked No. 8 in the Top 100 Tech Companies to Watch in Canada by FoundersBeta, an online global community of founders, innovators and changemakers.

The annual listing is released each January, highlighting up-and-coming startups from across the world in a variety of industries.

Kirwin, who graduated with a Bachelor of Arts in History in October, is the only female CEO named in the 2022 list’s Top 10.

DirtMarket made its debut in March 2021, winning Brock’s annual Monster Pitch competition, hosted by student club Brock Innovation Group in partnership with Goodman Group Venture Development and the Goodman School of Business. Inspired by the hit show Dragon’s Den, the competition sees Brock students pitch their business ideas to a panel of judges, with the winners awarded a cash prize and in-kind support services to help them kick-start their business venture.

After winning Monster Pitch, DirtMarket was awarded a prize pack of cash and startup support valued at $11,000.

The idea for DirtMarket was sparked after dirt was illegally dumped on an investment property owned by Jalib’s father, whose company suffered a financial blow having the unsolicited soil removed.

Jalib started researching the soil industry with Kirwin and found that there was more soil excavated each year than landfill space provided. They soon realized there was an opportunity to create an online platform dedicated to the exchange of soils from excavation projects to landfill sites.

“Founding DirtMarket and growing it to its current size in the last year has been a very rewarding and challenging experience,” Kirwin said. “Building a marketplace is a fine line of balancing supply and demand, while also ensuring a great client experience.”

Since their Monster Pitch win, Kirwin and Jalib have been actively expanding the business, introducing new soil sites across North America.

“The Monster Pitch competition at Brock University kick-started our growth and allowed us to reinvest in the company’s marketing and tech,” Kirwin said.

Now, with more than 1,200 members and 750 sites across North America, DirtMarket’s popularity has grown among construction companies looking for cost-saving ways to find local sources for their soil, view site alteration plans and conduct chemical analysis of soil types.

Recently, Kirwin was a panelist at the 2021 Excess Soil Symposium, discussing best practices driving successful implementation of Standards in Excess Soils Management. She has also been a guest lecturer at Niagara College, speaking about DirtMarket’s impact on the environment, as well as a keynote speaker at Innovation Factory’s Women in Entrepreneurship event. This past September, Kirwin was listed as one of Business London’s Twenty in their 20s.

Jalib recently pitched at Innovation Factory Hamilton’s Lion’s Lair Pitch Competition and was awarded fan favourite. He has also been nominated for Young Entrepreneur of the Year by Canadian SME.

“We are tackling a massive industry and have seen great success so far; this is really just the start for DirtMarket,” Kirwin said.

In 2022, Kirwin and Jalib are hoping to make connections with venture capitalists and angel investors who want to support construction-tech and female-led companies.