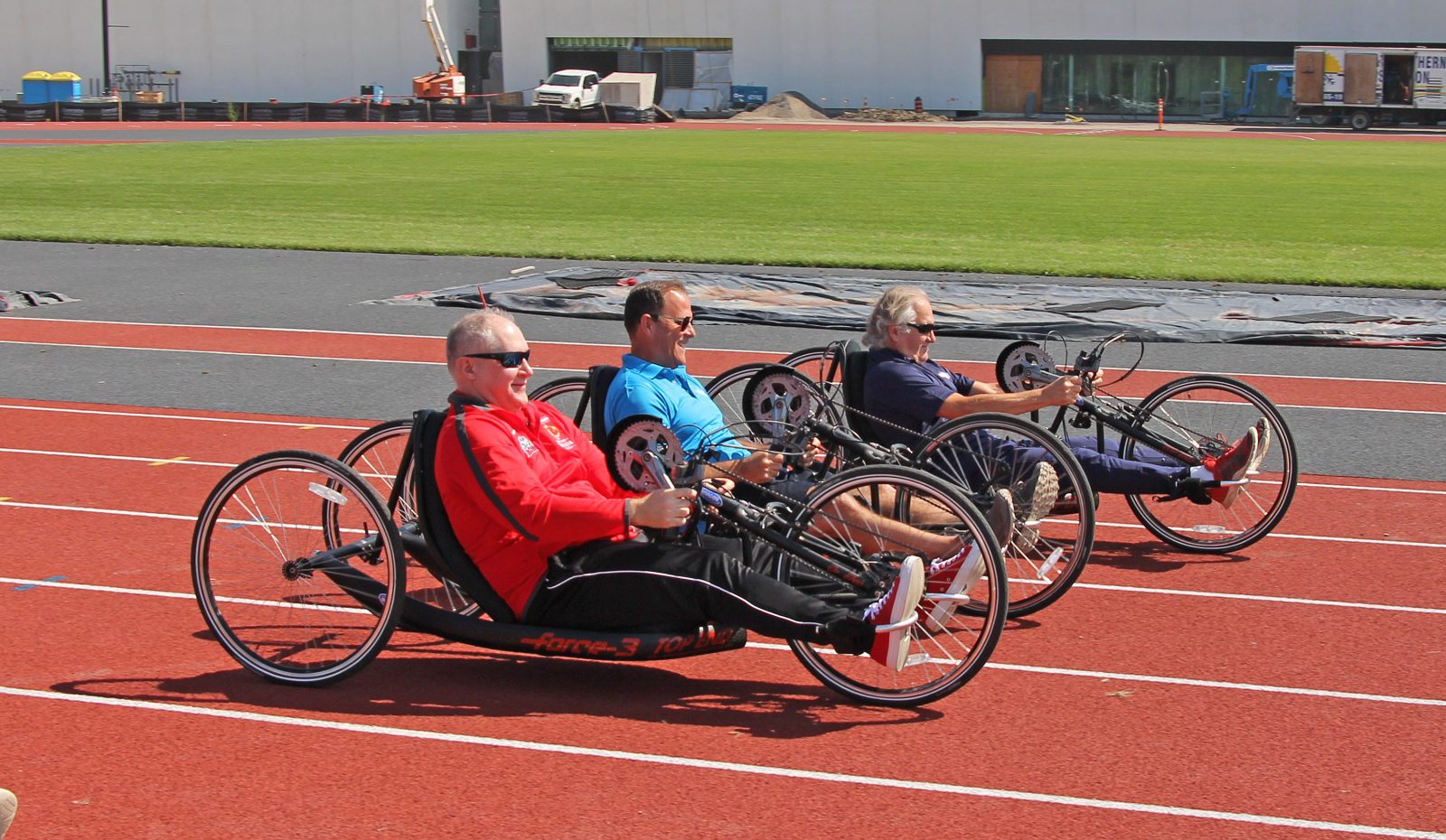 Brock Vice-President, Research Tim Kenyon (left), competed in a handcycle race with St. Catharines Mayor Walter Sendzik and Thorold Mayor Terry Ugulini, as well as athletes and members of the media to mark one year until the Canada Games begin in Niagara.

It was a small taste of the excitement to come.

A handcycle race between members of the Canada Games Park (CGP) consortium partners, athletes and members of the media took place at CGP on Thursday, Aug. 5 to mark one year until the games officially begin.

Among the participants in the race was Brock’s Vice-President, Research Tim Kenyon, who said the games would have a significant impact on the University. 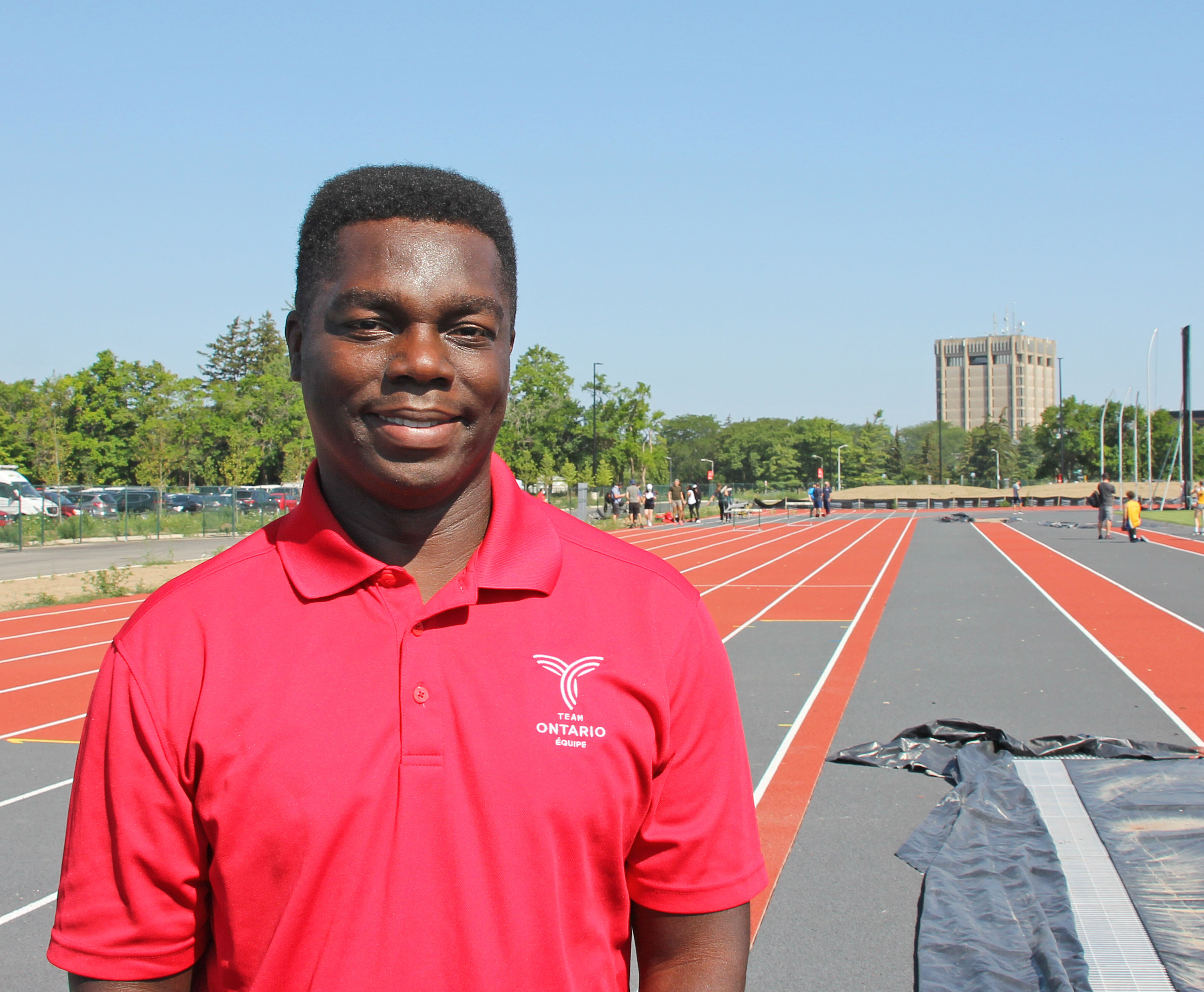 “The games at Brock are going to make a huge difference for the future of the institution and for students for many decades,” he said. “It’s going to change campus life from an athletic and social point of view, as well as research and education. The facility will provide opportunities for students to be more active on campus, to engage in more teamwork-based activities, and to just have fun — that’s so good for mental health and a sense of belonging.”

While Kenyon was racing down the track, Brock’s Vice-President, Administration Ken Chan was admiring the new athletics facilities at CGP that have emerged on the south side of Brock’s main campus.

“It’s a state-of-the-art facility that will not only benefit Brock University, but the Niagara region.” said Chan. “What I’m most excited about is the opportunity to bring back thousands of people — athletes, guests, supporters, family, friends, members of the Niagara community and beyond — together next year to celebrate the reopening of competitive sports in our country.”

Brock alumnus Steve Sevor (BPhEd ’00, MEd ’04), who will serve as Chef de Mission for Team Ontario, was also exploring the new facilities, while wishing they had been around during his time at the University.

“What a fantastic opportunity for the University to achieve more,” he said. “I remember when I was back here participating as a varsity athlete/student athlete and getting my formative development, we didn’t have all of this. So, having the opportunity for the student body and the faculty to experience the Games first and foremost and have legacies, such as this facility, Canada Games Park, is just phenomenal.”

Julie Stevens, Brock’s Special Advisor to the President — Canada Games, said the legacy of the games would also live on in other parts of the University. 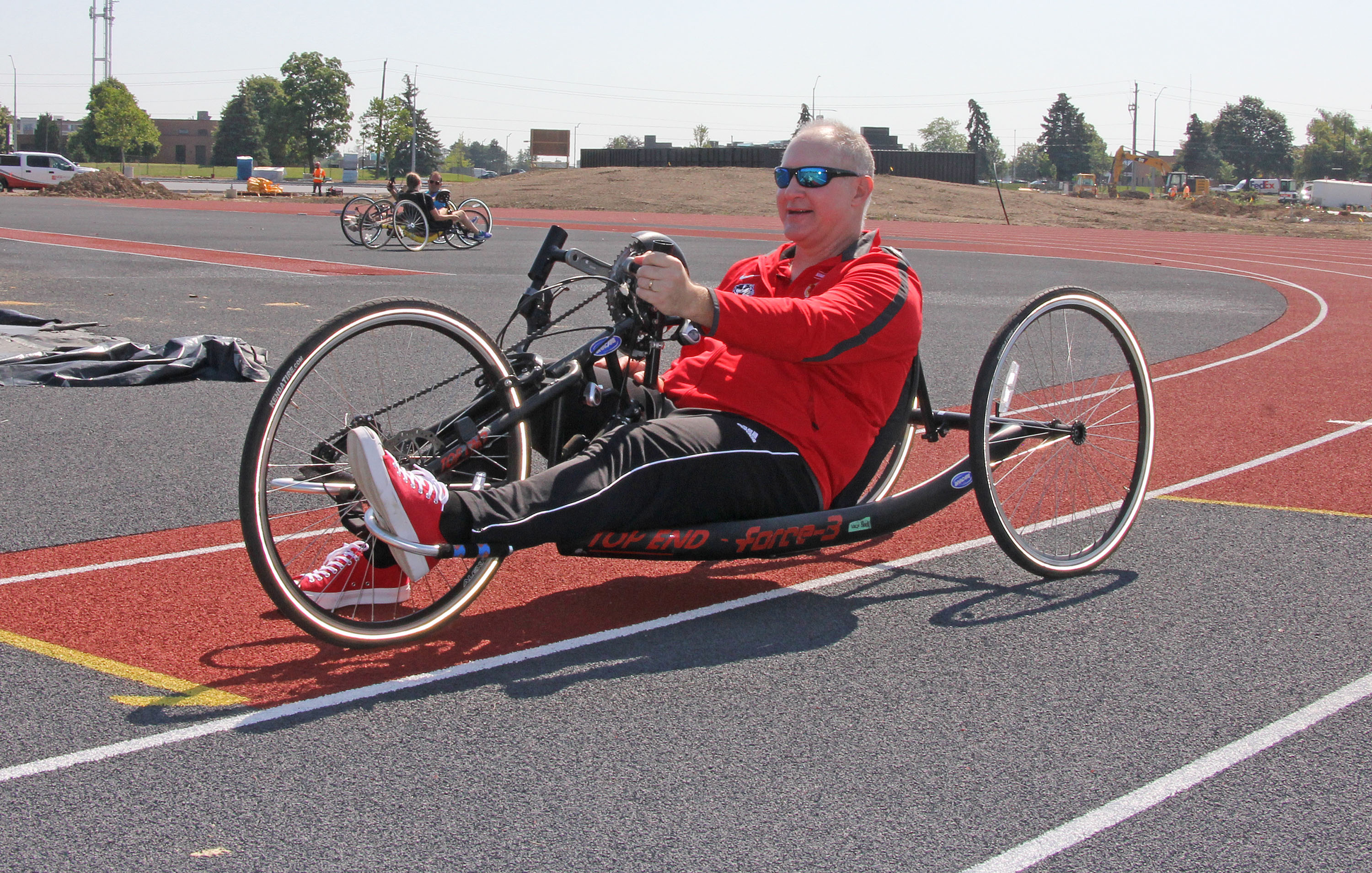 Brock Vice-President, Research Tim Kenyon tried out handcycle racing during an event to mark one year until the Canada Games begin in Niagara.

“The games are a tremendous opportunity for Brock University because it is in our backyard,” she said. “Since the moment the bid started, we have innovated through research, curricular teaching and learning, and community engagement in order to enhance and elevate our student learning experience.”

Stevens said there will be lots of activities for the Brock community leading up to the Games.

“I am so excited to catch the Games spirit as we re-engage and return to campus at Brock, doing many exciting activities on our campus as well as in our community, and just having a great time celebrating this with each other as the next year gets everything back to normal,” she said.

Having safely finished his trip around the new track, Kenyon is counting the days until the University can welcome visitors from across the country to take in the events, but he is most excited for the participants, who will get to live their dreams on the track and at other venues at the University and across the region.

“It’s about having that opportunity for athletes to put themselves in a position to do their very best on one of the biggest stages there is. That’s a wonderful thing,” he said.

The Canada Games will take place at Brock University and across Niagara from Saturday, Aug. 6 to Sunday, Aug. 21, 2022.

To learn more about Brock’s involvement in the Games, visit the Niagara 2022 Canada Summer Games at Brock University website.